Known as one of a new breed of ‘neo-realists’ to emerge from China in the 1990s, Liu Xiaodong has always had great faith in figurative painting’s ability to capture the modern experience as it presents itself. Reflecting on China’s breakneck social and artistic transformation, the Beijing-based artist explains what inspires him. 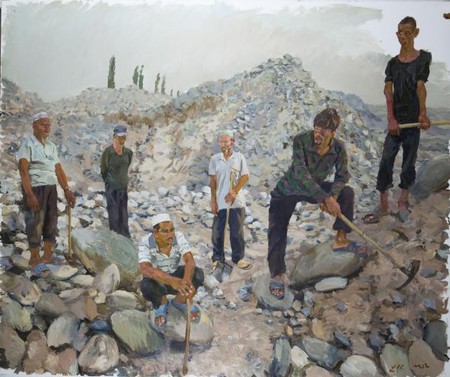 In conversation, Liu Xiaodong wants it known that he is as much a neo-realist as he is a documentary film-maker and diarist. For him, everything comes about as a consequence of his being present at a specific place, within a given period of time, and in circumstances that allows him to almost forensically conceive of new works. And Xiaodong is categorically much less interested by the notions of contemporary aesthetics as I attempt to attach them to him. When sited at the foot of a mountain, or at the edge of a ravine, settled on a level of land with his canvas covered over by temporary tarpaulin – a process for which he has become renowned – Xiaodong’s objective is to positively generate a new canon of work, in places damaged and devastated by natural disaster and man-made adulteration.

Asked about the nature of travelling to London for his Lisson Gallery show, Xiaodong confirms through his spirited translator that this was ‘his first solo show in London, for which Liu Xiaodong wished to be closer to the people of London.’ And, to that end, Xiaodong spent almost one and a half months painting from improvised locations — pubs, restaurants, and connecting thoroughfares — in order to be able to properly represent the visual circumstances around Lisson Gallery. Selecting his sitters by their association to a given landmark, and the space available to him to set up a large scale canvas and paint, Xiaodong befriended those that frequented his temporary studio over many days and weeks. Recording details of their posture, complexion, and recording their personalities both by anecdotal conversations and through labored observations, before deciding upon whether they, ‘the sitter’, suited a central position in one of his large scale London canvases or not.

In pursuit of such dogmatic details, Xiaodong carries with him sheets of paper that, when amassed, became illustrated diaries; laboring over them like a technocrat absorbed by new industries. Xiaodong adds beautiful little sketches of possible compositions, of where the light falls into a room, and details of the architectural layout and furnishings of the spaces that he occupies. Consequently, Xiaodong’s compositional layout is determined by his wish to open the painting up to his audience, as the foreground is rendered without obstacles or any kind of intrusion. Figures and furniture are all pushed left and right as the spectators are given pride of place at the forefront of his works.

Yet, unlike the original visionaries of ‘plein air’ painting, who sought to capture the elemental atmosphere of a given moment, Xiaodong is much more interested in the passage of time that is allowed to augment with his being present at a specific location. Thus, what transpires is much more of a documentary-styled narrative of the lives of many people, as they are either invited to dutifully sit for him, or otherwise become one of his many new acquaintances, immortalised in his make-shift diaries and photographs. Using film, his camera, sketching and scribbling paragraphs of initial information, Xiaodong exercises with very playful possibilities of points of entry into the lives of the people permanently conditioned by their tormented geography. Xiaodong has in the past used film as medium, working with Wang Xiaoshuai in the highly acclaimed The Days, 1993, and when discussing his involvement with film Xiaodong refers to major independent films that have been recognised in previous years at Venice. 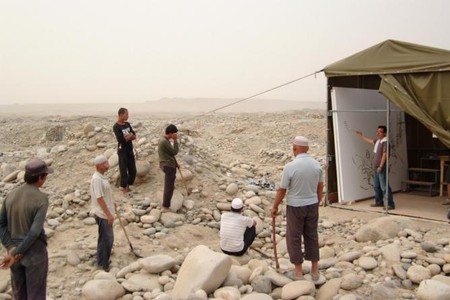 Xiaodong’s international significance lies in his landmark projects, which include The Hotan Project (2012-13), comprising of a two month self-determined residency in Xinjiang province. Within this, Xiaodong depicted and documented the lives of the jade miners, in a region best known for its reserves of the precious stone. Hotan Project, curated by Hou Hanru, included reams of photographs, initial sketches, interviews, diaries, and large-scale canvases, of which there were a quartet of works. And in parallel to Xiaodong, Hanru looked in greater detail at the wider geography, history and circumstance of Xinjiang province, in order to extract as much research material as possible for a documentary style exhibition. Co-curator Ou Ning added a further dimension to the project by introducing outside researchers and journalists to collaborate with local writers, historians, musicians, and craftsmen, in improvised acts of free expression of the creative energies that were present there at that time. Consequently, Xiaodong’s work proved to be a catalyst for an alternative look at a province otherwise plagued by natural disasters.

In a similar vein to Xiaodong’s Hotan Project, two of the artist’s leading paintings from 2010 were born of his documentary style need to reinterpret China’s recent history. Out of Beichuan, comprised a large scale canvas of an all-female cast of foregrounded figures congregated around a dilapidated cargo bicycle, against the harsh background of collapsed buildings and uneven mountains of resettled rubble. The painting has as its backdrop the aftermath of the seismic earthquake in 2008 in Beichuan, central China, in which hundreds of thousands lost their lives, and where a smaller quake occurred again in 2013. The city was transformed into a ghost town, defined by its apocalyptic landscape and utter desolation, and in which all of the survivors of the original quake were relocated to a city some distance away from the epicenter of the disaster zone. 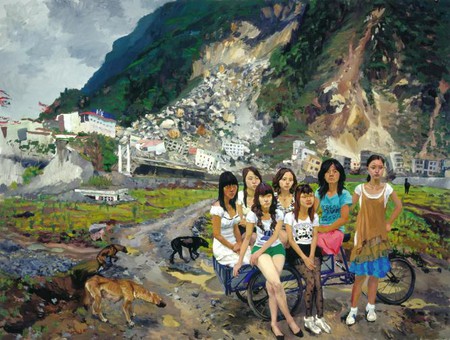 In Into Taihu, Xiaodong depicts a group of adolescent men gathered inside a small fishing boat on the polluted lake in Taihu, on the boarder of Jiangsu and Zhejiang provinces in Eastern China. Seven boys spread across this small fishing boat are mirrored by seven unruly birds returning to flight, and for this work Xiaodong had asked a handful of young boys from an opera group to act as his leads in his temporary fable of social ills. Unlike the obvious natural disaster depicted in Out of Beichuan, the scene in Into Taihu appears more appealing, tranquil almost – that is, until you focus on the waters cradling the composition. The murky green-blue lake alludes to a man-made disaster that has infected that part of the Yangtze Delta plain for many years now. The boys, likely to have been from the nearby city of Wuxi, have seen the waters slowly change color due to the fall-out of the chemical engineering plants in the township of Yixing. Critically for Xiaodong, Beichuan’s heaven-sent calamity, and Lake Taihu’s man-made disaster, are aided by ritual ceremonies, in which ‘virgin boys and young girls’ are paraded in honor of heaven in the hope of averting or lessening the damage done. For Xiaodong, the age-old proverb appears to sanction his production of these two related works, as he enacts and enables a tangible relationship between fable and fact. Xiaodong also saw it fitting, when taking residence in Beichuan and at Lake Taihu, to initially draw on a series of visual diaries, taking regular photographs of the villages, the occupants and surrounding landscape, and drawing on videos. He thereby had an entire glossary of the lives of the people in these effected areas. Tellingly for Xiaodong, the nature of a disaster of any kind, and his understanding of it, is as much about the subsequent days and years after the immediate events in which people perish and entire villages disappear, as it is about the seismic damage itself. Visually, then, it appears that Xiaodong tries to reason with the aftermath, as the nature and the condition of a disaster becomes a visible scare upon the landscape, and upon the lives of generations of people. 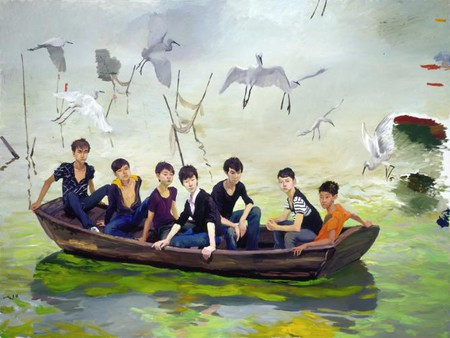 Located, as he is, at the epicenters of such ‘natural’ and ‘man-made’ disasters, Xiaodong always begins his projects by employing a procedure and practice that is as practical as it might be if he were entering a studio to paint a small canvas of a seated figure. The elemental requirements for such an endeavor appears the same for the artist, though the scale and materials differ greatly.

Firstly, and most practically, the size of the canvas and the accompanying crate need to be considered and constructed in Beijing well before the project begins. Once the canvas is complete, it is delivered by large truck to the site, where a make-shift shelter is constructed of tarpaulin and bamboo, temporary easels are erected, containers of oil paints, diaries, drawings, reams of photographic film, and video recording equipment delivered and employed. These have become the choice apparatus for the artist as he takes up residence on a site for many weeks and months, in order to source a point of entry for a new documentary-style body of work. Once the painting is complete it is recrated to be returned to his studio. Xiaodong explains how ‘he likes to paint a place that has a troubled background, and this kind of background will give him the inspiration to paint.’ For Xiaodong his temporary relationships with the inhabitants begin as ‘strangers in discussion, and then they become good friends, and it is always like this’, in order he can arrive at a work that serves everyone well. When asked if he seeks to return to a location he has earmarked for an artwork, he confirms he would, ‘if the opportunity presents itself’. Xiaodong, as much preoccupied with new locations and their accompanying circumstances, is as interested in nostalgia and his feelings for the familiar.

In 2010, Xiaodong made such a return visit, to his hometown of Jincheng, in the north-eastern province of Liaoning. Xiaodong encamped himself there for several months, employing many of his signature approaches to making a new body of works. Conceiving of a diary in the first instance, he wrote and drew an initial narrative for what he wanted to depict on a grander scale. When discussing Liaoning, Xiaodong declared something of his self-interest in what had drawn him back to his place of birth. Professing, ‘as soon as you begin to talk about your homeland, something starts to happen inside you, something like homesickness. I think in my innermost self, I do not want anything to change in my hometown. You just want your old home to stay as it always used to be. Only if it stays that way can it remain a refuse for us, however reality is different.’ ‘However reality is different, urbanization is spreading much too quickly, destroying everything that we loved or did not love; forming a new city out of everything.’ This certainly goes some way towards explaining why Xiaodong is less inclined to be rooted in any of China’s modern cities, and is more interested in the wider agricultural landscape, in Taihu, on the boarder of Jiangsu and Zhejiang provinces in Eastern China, and Beichuan in central China, as seen through the eyes of its workers and peasant famers. For Xiaodong, there is much more in China’s history, its people and regional provinces, than there is in the industrial cities fashioned by modern interests.

For Xiaodong, The Hotan Project (2012-2013), explores the imposition of modernity as a project of social progress and the insistence on the preservation of traditions that is at the heart of China’s road to transformation, and central to Xiaodong’s work. Leading, as it does, to the alienation of one over the other, its ultimate conclusion regards the superiority of modernity over existing social and cultural value systems.