Can Chinese Animation Return To Its Former Glory? 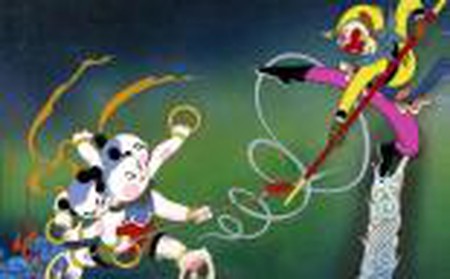 Chinese animation movies fell out of favour during the political upheavals of the 1960s. Here we take a look at two of the most successful films, and ponder if this branch of the film industry can recover.

The Chinese animated films Havoc in Heaven (part one 1961, part two 1964) and Nezha Conquers the Dragon King (1978) are unlikely to make any international top films lists. Despite their initial success, they have even languished in China.

Both films weave traditional Chinese mythology into full-coloured animations that draw stylistically from the Beijing Opera. In Havoc in Heaven, Sun Wukong, the audacious and puckish king of the monkeys, defies the high hosts of heaven — the Chinese mythological pantheon that includes the Dragon King and Nezha.

While the Monkey King’s story ends well, with Sun returning to his adoring subjects, the story of Chinese animation came to a sudden stop in 1964 after the completion of part two of Havoc in Heaven.

Indeed, China’s animation industry closely follows the ups-and-downs of the nation’s turbulent 20th century history. The release date for Havoc in Heaven was slated for 1941, but production was interrupted by the Second Sino-Japanese War and then the Chinese Civil War. The first part was eventually released in 1961 to massive acclaim.

However, from 1966 to 1976, the Cultural Revolution put a stop to creative endeavours considered capitalistic or traditional. As a result, not until 1979 was another animated film completed. Nezha Conquerors the Dragon King depicted the mythological battle between the warrior deity Nezha and the Dragon King of the Eastern Sea.

More recently, the challenge to Chinese animation comes not via political mandate, but through the industry’s attempts to mimic foreign products. American studios like Pixar and Dreamworks have dominated the animated-film industry in terms of box-office performance.

Chinese animated films such as Monkey King v. Er Lang Shen (2007) and Hong Kong’s DragonBlade: The Legend of Lang (2005) have fused Chinese stories with modern animation techniques, following the lead of American studios. The adoption of new techniques has not helped Chinese animation find an international audience, however.

The surviving Chinese animators who pioneered the form and embraced traditional techniques are now in their 80s and 90s, but a new generation has not emerged to take their place. As China’s burgeoning economic growth trickles into its cultural sector, perhaps that will soon change.