If you’re looking for hip-hop’s rising king of spice, Bohan Phoenix is your man.

Raised in Chengdu, China (the nation’s spice capital), Phoenix has spent most of his adult life in New York City (after several years in Boston), and established himself as a leader in rap’s surging Asian class—employing a distinctive fusion of Eastern and Western influences on his most recent release, Jala.

Culture Trip recently sat down with Phoenix for an episode of The Pregame, so in the lead up to its premiere, we took a deep dive into Phoenix’s Twitter and pulled out some of his funniest, weirdest, and most thought-provoking shares. Catch his explanations in the video up top, along with a few of the highlights below.

i will be in the 2020 summer olympics

Bohan Phoenix: I can’t swim, so swimming is definitely fucking out… for me to go and tweet it, something had to inspire me… I honestly don’t remember, but if I had to, I’m really good at long jump. I’m light, so once I pick up momentum I’m like [jumping noise].

BP: Actually, she jumped in the conversation between me and the Uber driver. He was like, “Where are you from?” I’m like, “I’m from China.” He said, “Oh, it’s different out there.” I was like, “Yeah, yeah, my friends, they just came back on tour with me. One thing that blew their minds, among other things, was that you have to squat down to take a shit.”

So I was telling the driver that, and this girl came in because it was an Uber Pool. She was like, “Oh, yeah, my friend just came back from China, what are you guys talking about?” I was like, “Oh, you know, we’re just talking about the toilet situation. You squat down to take a shit.”

Culture Trip: But that’s not the only time you’ve mentioned Lindsay Lohan…

BP: Lindsay definitely was a crush. I still think she is a crush, I haven’t checked her Instagram in a minute… Maybe it’s the Bohan-Lohan thing, too.

CT: You could be Bohan Lohan!

BP: You know, fuck rap, guys, from today… no, but that was purely wine-inspired. But I want to make that [album] happen, though. That would be hot.

LADIES!!! MARRY ME FOR CHINESE CITIZENSHIP I GOTCHU ITS LOVELOVE ❤️❤️

BP: My ex at the time was super mad at me for this. She was like, “How are you gonna have a girlfriend and tweet something like this?” I think this was when Trump…I think this when everyone realized it was serious, you know? I was just trying to take advantage.

CT: If you had to put a Craigslist ad out, how are you pitching it?

BP: Chinese rapper moving back to China looking for Trump refugees from America who is able to roll up and cook and likes really dope music.

i prefer the term golden people instead of yellow people

BP: Honestly, it was like earlier when I was referring to this [Trivial Pursuit] piece as gold instead of yellow. Words do have power, you know, and the whole yellow… to me, it’s like the word ‘Oriental.’ I actually didn’t call [my sound] “Oriental trap.” The writer at Bandcamp wrote it as Oriental trap. Oriental is a word made up by the Westerners.

Catch Bohan Phoenix on tour this summer in Japan and China. 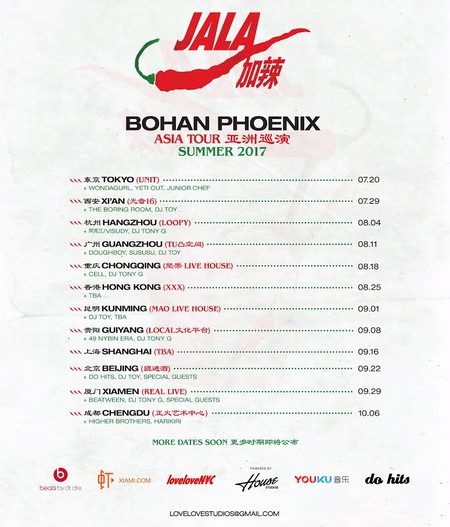