China's Spiciest Dishes and Why You Need to Try Them 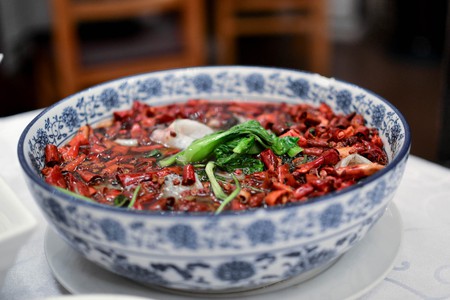 It’s a little known fact, that pretty much every cuisine in the world has a spicy dish featuring chilli; from the scorching curries of India, to the pasta arrabiata (meaning angry) in Italy. Which is remarkable when you think that up until the Columbian exchange in the 16th century, the world’s chilli peppers were where they’d always been, in South America.

But if there’s one country that has placed the chilli at the centre of its cooking in the following 400 years, it’s China, and in particular, the cooking of the Sichuan and Hunan regions, which have married chillies to their already fiery peppercorns. Indeed Chinese chefs have seven different ways of describing heat from chillies; numbing, spicy, hot in temperature, fresh, tender and soft, aromatic and flaky. Now you can cook these dishes and reduce the amount of chilli, but that wouldn’t be authentic. Here then, are spiciest of the lot.

Hailing from Sichuan, mapo doufu sees pieces of tofu, as well as meat, served in a spicy chilli sauce enriched with bean paste. The name literally translates as ‘pock-marked granny’s tofu’, reputedly named after the old lady who invented it. 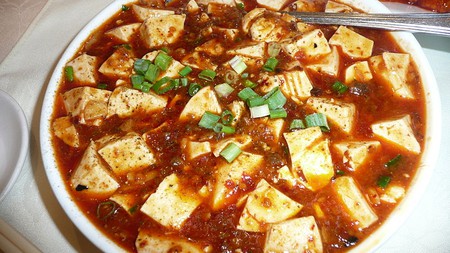 Lots of regions in China have pork dishes similar to this that tend to be sweet in flavour. But the Hunanese version features their love of chillies. Hongshao rou translates as red braised pork, and the Máo shì hóngshāoròu version was reputed to be the favourite of Mao Tse-tung, so much so that the authorities have codified what it should be made from and how it should be made.

A classic example of eating all the parts of an animal, this dish adds a heap load of chilli to a steamed fish head. There’s also whole fish versions.

This dish gets its name from the long pole people use to carry two baskets, one containing the noodles, and the other the sauce. The latter is made from preserved vegetables, mushroom stems, chilli oil, sichuan pepper, minced pork and spring onions. 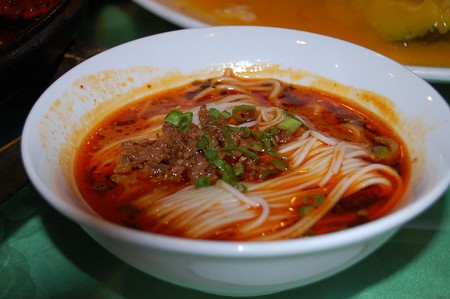 Often literally translated as saliva chicken, perhaps ‘mouthwatering’ would be more appropriate. This dish is made up of pieces of poached chicken served in a fiery chilli oil sauce.

When you think of Chinese ‘hot pots’ you imagine bowls of stock in which you poach individual ingredients, but there’s also dry versions too. This one doesn’t have a long rich history like many other Chinese dishes, instead it’s a fairly new creation. Like ‘wet’ hot pots however, you get to choose what goes in it. Restaurants that specialise in serving ma la xiang guo have a counter with a selection of raw ingredients, you simply choose what you’d like to add, and the chef weighs it, takes it away and cooks it for you.

Though Hunan and Szechuan are famous for their love of spice, they’re not the only ones. Shaanxi Province has its own spicy dish featuring thick ribbons of rice noodles, slices of cucumber and flowers that taste like tofu, to which lots of chillies are added. It’s often eaten with rou jia mo (flat buns stuffed with pork, similar to bao). 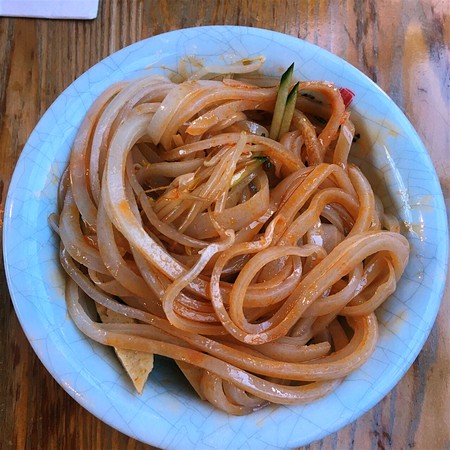 This wet hot pot comes in a special bowl that is divided into nine squares, much like a sudoku board. Each chambers contains stock made with different ingredients and with different spice levels (the centre square often being the hottest).