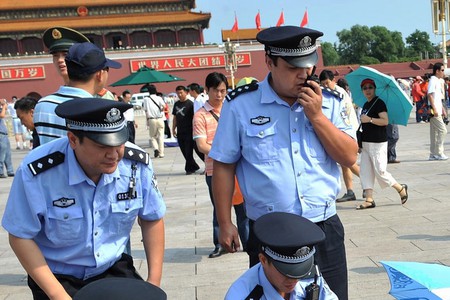 The criminal spotting glasses in question have been designed for police use – each pair is fitted with a camera that can scan the face of passengers coming into a railway station. The glasses enable officers to compare faces in a database, looking for a match with suspects.

Using the hi-tech glasses, officers can access basic information on the suspects, including name, ethnicity and gender. The technology can also reveal whether or not the suspect is on the run from the law, the address of the hotel they are staying in and their internet usage.

Police officers stationed at China’s Zhengzhou East high-speed rail station in Henan province are currently using the glasses, and according to Cnrail.net, have already spotted 26 cases of identity fraud. In addition, they have also identified seven fugitives related to hit-and-run and human trafficking cases.

The Chinese New Year travel rush, known as ‘Chunyun‘ in Chinese, is seen as a prime time to spot criminals on the move. The holiday is the biggest annual human migration on the planet, when an estimated 3 billion trips are made by Chinese travelling to and from their hometowns to celebrate the New Year with their family.

This year, the country’s main planning commission estimates that 390 million of those trips will be made by rail. In the case of the Zhengzhou East high-speed rail station where the glasses are being used, some 70,000-120,000 people are thought to use the railway station each day.

According to experts, China is said to have an edge over Western countries in developing facial recognition due to its less stringent privacy laws.

While China is very proud of the technology, Amnesty International’s China researcher William Nee told the Daily Mail he’s concerned it could lead to an impingement on the privacy of citizens.

“There is ample evidence that the government is using new technologies, like widespread CCTV cameras combined with facial recognition technology, to create a perfect police state,” he said.