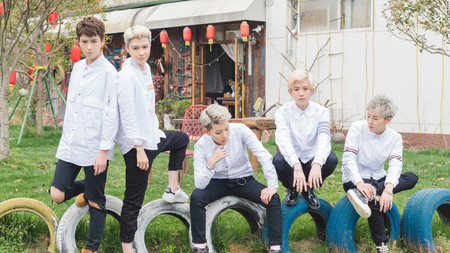 The hottest new addition to the C-Pop field, FFC Acrush, have finally given fans their first taste of music with the release of their “Action” video.

The Chinese “boy band” first made world headlines at the end of March due to the fact that the group is actually made up of five females. However, as reported by Mashable, all members — Lu Keran, Peng Xichen, Lin Fan, An Junxi, and Min Junqian — prefer to use the gender-free term “meishaonian,” which translates to “handsome youths.”

“We’re a girl band. But we look more like beautiful young men, not young girls,” Junqian told CNN. “So the positioning fits us more.”

Thanks to their androgynous style, the band’s fans refer to the members as “husband,” a term commonly attributed to attractive looking males in China.

After amassing a huge fanbase over the past few months without releasing any music, FFC Acrush have finally delivered the first taste of their sound with the promised release of “行动派,” or “Action” (while Wikipedia lists the translated title as “Action,” other names such as “Activistis” and “Go-Getter” have been suggested). A high-powered EDM banger built for the clubs, all five members take their turns either singing or rapping, briefly dipping into English for the choruses repeated line, “Bounce everybody, bounce everybody, hey.” Watch the music video below.

Due to their affiliation with the sports brand Fantasy Football Confederation (hence the FFC in their name), elements of soccer will constantly permeate their image. As The Shanghaiist puts it:

The “A” in Acrush stands for the Greek god Adonis, furthering the group’s male image. Yet, as Wang Tianhai, the “Simon Cowell-esque” figure largely behind the band’s formation, told The Guardian, Acrush is unlikely to foray into gender politics.

“They just enjoy the male appearance, the carefree style and want to sing like men,” Wang said. “They want to express a positive and sunny image, to show that girls can be a boyband too.”