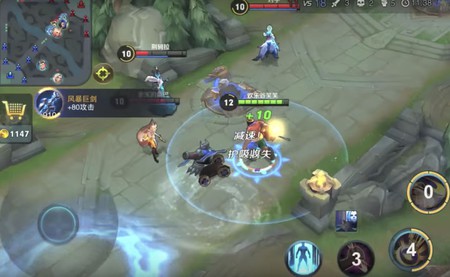 Honour of Kings, the highest-grossing mobile game in China on both Android and iOS, has introduced limits on the amount of time younger users can play the game, after reports of increasing addiction among users.

Children under the age of 12 will only be able to play one hour of the game every day, and won’t be able to sign in after 9 p.m., the game’s creator Tencent has said. People aged between 12-18 will be limited to two hours of the game per day.

Honour of Kings is a fantasy role playing game that features prominent characters from China’s history. The game has around 200 million players, meaning it’s one of the most popular mobile games in the world, but has drawn the ire of state-run media. People’s Daily newspaper described the game as “poison” and a “drug”, South China Morning Post reports.

The People’s Daily newspaper also claimed the game has been “constantly releasing negative energy,” and asked if it was entertaining the public or “ruining people’s lives”.

“There are no clear regulations to guard against mobile gaming addiction in China, but we have decided to take the lead to try to dispel parents’ concerns by limiting play time and force children to log off,” Tencent said in a statement.

However, the measures taken to prevent children playing the game for too long are already being circumnavigated by hackers and opportunists. A report from the Beijing News shows gaming accounts for Honour of Kings registered with adult IDs are being sold on gaming sites.

Hacking services have also emerged, that offer to bypass the time limit for those with accounts linked to younger IDs.

On July 4 when the announcement of the restrictions was made, Tencent’s shares dropped 4 percent and continued to plummet the following day.