As one of the world’s largest investors in renewable energy, China has pledged a large amount of money to solar power through 2020. These investments include gigantic floating solar power plants, that are environmentally sound and produce enough energy to power small villages.

In the Eastern province of Anhui, China, Three Gorges Group is building a $157 million floating power plant. The 150 megawatt plant is expected to become the world’s largest when it’s completed in May 2018, capable of powering around 94,000 homes. The project will feature panels fixed to floats on the surface of a lake that formed after a coal mine collapsed.

The Anhui project is symbolic of the energy shift underway in China, where the government is trying to minimize the emissions created by coal energy. These emissions have caused some cities to become engulfed in smog.

The previous largest floating solar farm was also in China, in the same region. That farm began production in 2017 and produces 40 megawatts of power through a 120,000-panel array. The panels cover an area equivalent to 160 American football fields. It was developed by Chinese power company Sungrow Power Supply and will operate for up to 25 years.

Building solar farms on lakes and reservoirs makes a lot of sense. The panels don’t disturb the wildlife, and less construction has to be undertaken on land. The water also cools the solar panels, which helps them work more efficiently. 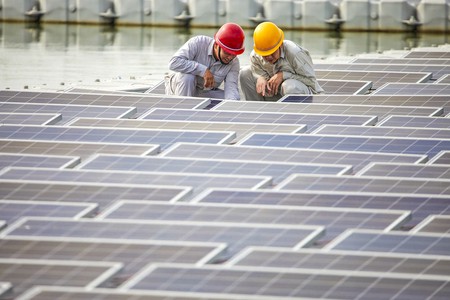 China is arguably the global leader in solar power. The International Energy Agency said that in 2016 the country installed twice the solar capacity the U.S. did in the same year, and contributed nearly half of all solar capacity in the world. This huge jump to solar is for a reason. Burning coal is said to be the top contributor towards air pollution-related deaths in China, according to a 2016 study. The same research found that pollution from coal caused 366,000 premature deaths in 2013.

China’s government has pledged to spend at least $360 billion on clean energy projects by 2020.

Floating solar farms are not a new invention, but China has embraced them on a far larger scale than previously seen. In 2016, The Guardian reported on a floating farm near Heathrow airport in London which had 23,000 solar panels on the Queen Elizabeth II reservoir.

Also in 2016, work began in Japan on a solar farm that will potentially power 5,000 homes every year when it begins operations in 2018. The project is being built at the Yamakura Dam reservoir near Tokyo in a joint effort between electronics manufacturer Kyocera and the Century Tokyo Leasing Corporation. The solar farm is expected to consist of 51,000 solar cells floating on the reservoir surface.