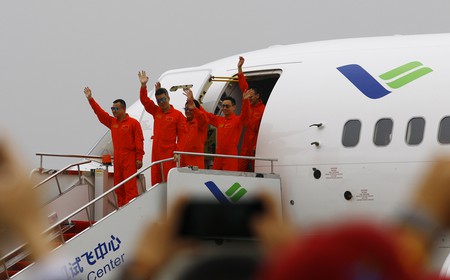 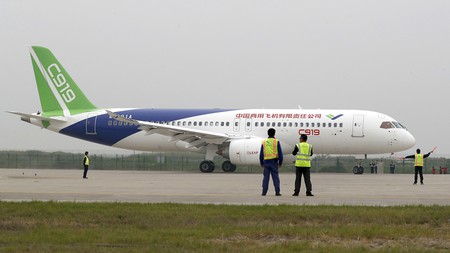 Built by state-owned Commercial Aircraft Corp. (Comac) the C919 is being touted as a rival to American-owned Boeing and French-owned Airbus with the company saying it has already received 570 orders, mostly from domestic airlines including Air China and some foreign customers, including GE Capital Aviation Services and Thailand’s City Airways.

Comac says it plans to build two C919 aircraft – similar in size and range to the Airbus A320 and Boeing 737 – every year until 2019, in order to prove that it is safe for commercial flights, at which point mass production can begin. The plane can be fitted with 155–175 seats and its average flight length is 4,075 kilometres (2,532 miles).

The C919 was originally scheduled for completion in 2014, only for manufacturing problems to delay the launch. More than 200 Chinese companies and 36 universities have helped in the creation of the aircraft, which also uses some technology from Western partners, including engine manufacturer CFM International.

The twin-engine C919 took off from Shanghai airport at 2pm last Friday, landing at the same airport 80 minutes later. ‘I am very happy and proud to see the takeoff. It is very beautiful – a very smooth takeoff,’ Fu Song, an engineer at Tsinghua University, which was involved in the project, told CGTN. ‘We are very proud to see that it worked.’