China Welcomes the Australian Football League for the First Time 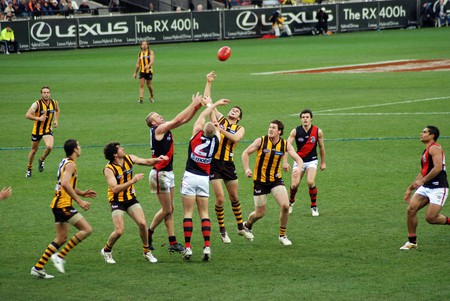 Two teams brought professional Australian rules football to China for the first time, with the sport the latest to want a piece of the Chinese market.

Port Adelaide played Gold Coast Suns, beating them heavily 16.14 (110) to 4.14 (38) at the Jiangwan Stadium in Shanghai. The match saw over 10,000 fans attend, with roughly half expected to have travelled over from Australia. With Channel 7, Fox Sports, China Central TV, Shanghai TV and Guangzhou TV all broadcasting the game, the sport was brought to a large number of new local fans.

The match is just one part of of a two-year campaign from Port Adelaide to increase the presence of the club, and the sport, in China. Gui Guojie, the billionaire property developer, already sponsors the club, while AusGold, the mining company based in south western Australia, is also a backer via its owner, Chinese-Australian mining businesswoman Sally Zou.

While the business decisions are based on raising Port Adelaide’s profile in China, Gui’s sponsorship is also part of a mutually beneficial deal that sees his business interests catered for in South Australia. Setting up the Virtue Australia Foundation, a philanthropic body started by Giu with John Taplin, the former Pro Vice-Chancellor (International) of Adelaide University, suggests that the Chinese businessman has long term interests and bonds in Australia that he wants to promote, beyond the rumoured AU$1 million (US$755,000) per year he’s paying the club as part of a three year deal.

Aussie rules football is well aware of the challenge ahead. China is the obvious choice for any sport looking to grow internationally, given its population, size and willingness to spend money. The issue that the AFL and Port Adelaide have is that they are competing not only with traditional Chinese sports, but also major international sports that are far further down the road in terms of breaking into the Chinese market, most notably, soccer. While soccer is growing rapidly in China, with huge swells of money being funnelled into the Chinese Super League, schools and the international side – the AFL doesn’t enjoy the same global reach or significance.

What is essential for Aussie rules football is to grow the sport with younger age groups. Convincing children to play in schools is a far more sensible strategy than hosting professional games where fans aren’t too sure what’s going on. That said, it’s important for young enthusiasts to have players to follow and look up to, and the world’s best clearly hail from Australia.

Australian rules football has actually been played in China for over 25 years. Over the last decade it has taken more significant steps, with the Australian Football League (AFL) investing in matches, setting up academies and building an oval in Tianjin. The city, in the north eastern part of the country, is one of a number of major cities, along with Beijing, Shanghai and Guangzhou, that have senior clubs set up.

Of the match itself, AFL chief executive Gillon McLachlan hailed it as a success, saying; ‘It was obviously a really pleasing day for football, for Port Adelaide, for our game – a good crowd, the venue looked amazing and it came up well on broadcast. We think we’ve invested for the long-term here – we’ll continue to work with the local authority and the layers of government in this country. Today’s been a big success, I’m sure they would have enjoyed today.’