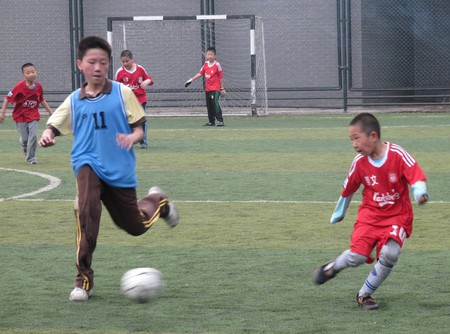 China’s dedication to soccer isn’t new news at this point. President Xi Jinping has avidly expressed his priority in turning China into a soccer powerhouse for years. Most recently, China’s soccer association vice president Wang Dengfeng announced the nation’s plan to build 50,000 soccer academies — more than double the earlier target of 20,000 — by 2020. “This is a solid way to select football talent for our future reserves. Improving Chinese football is no longer just a dream,” Wang was quoted as saying on the website of the ruling Communist Party mouthpiece People’s Daily.

Each academy will train 1,000 young players on average, according to the Associated Press, fulfilling the goal revealed in April of having 50 million competent players. The drastic increase in competent players will only bolster China’s national teams. The men’s national team has qualified for one World Cup, but Jinping wants it to be commonplace every four years. Jinping wants China to not only host the globe’s premier soccer event, but also win it by 2050.

This prioritization of soccer is in stark contrast to China’s stance on golf. The country recently shut down 111 golf courses following a multi-year campaign to protect land and water resources. According to Golf Digest, “even though building courses had been outlawed since 2004, the number of golf courses has tripled in that time. Developers would often label courses as parks or housing ventures to get approval from local officials, secretly converting the projects down the line.”