Why Is China Obsessed with This Bollywood Film? 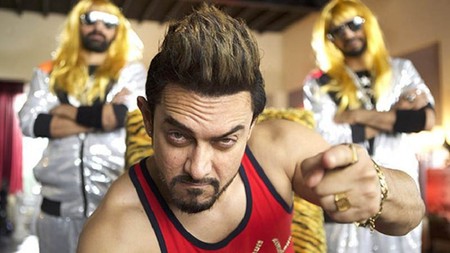 At first glance, it doesn’t seem like the most likely fit – millions of Chinese cinema-goers flocking to see a movie about a burqa-wearing Muslim teen and her dreams of pop stardom – but that’s exactly what happened earlier this month when the Bollywood movie Secret Superstar dominated China‘s box office.

At the time of writing, the drama has raked in over $100 million, sweeping aside domestic Chinese films and and even outperforming earnings in its native country. No mean feat for a film jostling for place in the second-largest movie market in the world, playing to audiences in a country where practicing Islam is a major issue.

The film is an old-fashioned tale of an underdog struggling against adversity to fulfil her dream. Zaira Wasim plays Insia, a 14-year-old girl living in Vadodara, India. Her life’s ambition is to become a singer, but she is thwarted by her abusive father. Rather than abandon her dream, she dons her burqa and begins anonymously posting her performances to YouTube, where she becomes a viral sensation.

A story with plenty of appeal, but by no means an automatic guarantee of Chinese box office gold. So why is the film reigning supreme in a country where The Last Jedi was a dismal flop? There are a number of answers, but a major key to the film’s appeal is the presence of leading man and producer Aamir Khan, who plays the music mogul who discovers Insia.

A familiar face to lovers of Indian cinema, he is a superstar in China as well as in his home country and was first introduced to Chinese audiences via his 2009 film 3 Idiots. Subsequent features have been big hits, and last year’s sports biopic Dangal (also produced by his company, Aamir Khan Productions) was the biggest Indian movie in Chinese box office history. As a rule of thumb, Bollywood movies are generally not huge in China, but Aamir Khan movies definitely are.

Such is Khan’s clout that he is seen as a vital cog in helping to improve relations between two of the world’s fastest-growing economies. He has appeared on Chinese television shows such as Bite Me! and has even received the official seal of approval by being interviewed by state media. Khan has his own account on Weibo – China’s equivalent of Twitter – with over a million followers. His Chinese fan club also has its own Twitter account.

There are other, more complex reasons for the film’s success. The themes of Secret Superstar are ones to which many Chinese can relate. Khan’s movies tend to resonate with young Chinese audiences, who take regularly to online forums on the country’s movie website Doubon in order to discuss them. User @shininglove on Douban poses the question of the age: “When will there be a Chinese Aamir Khan?”

In a country where there are 30 million more men than women, Zaira’s struggle in Secret Superstar against a heavily patriarchal society is a story shared by countless people in China. Khan, a major supporter of humanitarian and political causes in India (so much so that he has earned the nickname “India’s conscience”), is admired in China not just for his star power but also for what his films represent. User @Zaiwodesahala says on Weibo: “Watching Aamir Khan’s films has become a faith of mine. Thank you for the positive energy you brought to us.” User @Jiaoyechenmeng says: “Aamir Khan’s films revealed the status of the people from the lower social strata and aroused people’s sympathy.”