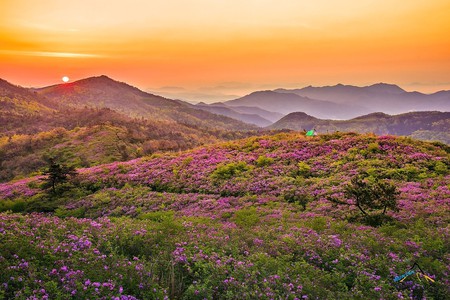 China is well known for its giant megacities, skyscrapers and seemingly never-ending urban sprawl, but there is life beyond its concrete jungles.

As spring arrives and the temperatures warm up, flowers in every colour emerge, creating some truly stunning scenes. Some areas are literally carpeted in apricot, cherry and azalea blossoms, making for a beautiful display.

Each of China’s provinces offers a different variety of flowers. The cherry blossom at the Pingba Farm in southwest China’s Guizhou Province is reminiscent of Japan’s famous cherry blossom spots. The province is also home to the Baili Azalea Scenic Spot, which at 130 square kilometres is the world’s largest azalea forest.

Azaleas are also found at Beijing’s Yunmengshan National Forest Park. You’ll find at least 5,000 acres of red azalea to explore. The city is also home to a range of flowers that bloom from late March through mid-May, including azaleas, tulips, lilacs, and crabapple blossoms. Every April, millions of tulips are on display at the Tulip Cultural Festival in Shunyi. Along with them, there are hundreds of thousands of lilies, and cultural exhibitions.

Meanwhile, in late March, Huangling, a small mountain village, is famous for its golden rapeseed flowers that produce abundant fields of gold. The quaint and elegant village attracts visitors from all over the world and has been recognised as one of the most beautiful destinations in China.

Elsewhere, the Peach Blossom Festival at the Beijing Botanical Garden takes place from April to May and and is filled with 6,000 peach trees. Wandering around the park you’ll find over 40 types of peach trees as well as plenty of sakura blooms and lilac flowers.

Peonies are also popular in the country, and they bloom from mid-April to mid-May at the Luoyang National Peony Garden. Luoyang was known as the “Home of Peonies.” The Peony Festival begins about the middle of April and ends in early May. The garden spans close to 30 city blocks and features more than 400 varieties of the flower.