China Is Censoring Hip Hop On Television and Streaming Sites 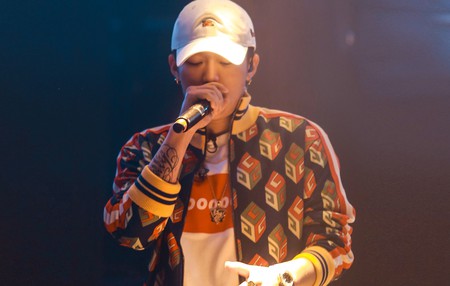 Last year, China banned Justin Bieber from performing in the country due to “bad behavior.” In 2018, the nation seems determined to crack down on its own hip-hop artists.

Although its presence has been felt since the ’80s, hip hop had a renaissance of sorts in China last year thanks to the massive success of the reality show The Rap of China and the boom of East-meets-West label 88rising.

In its first season, The Rap of China had racked up over 2.5 billion views online. Despite these big numbers—or perhaps because of them—the show’s co-winners PG One (Wang Hao) and GAI (Zhou Yan) have both been sanctioned in recent weeks for “bad behavior,” or content that doesn’t align with the values of the nation’s Communist Party, Reuters reports.

Earlier this month, PG One was forced to apologize for “lewd lyrics” in his song “Christmas Eve,” with the Communist Youth League and the China Women’s News site calling out the track for “encouraging teenagers to use drugs” and “insulting women.” Xinhua, China’s official news agency, went on to say that PG One “does not deserve the stage,” and that platforms that promote such “low-taste content” shouldn’t be tolerated. Several Chinese streaming sites have pulled his content since.

In GAI’s case, the rapper was suddenly, and without explanation, pulled from competing in another reality show, The Singer. All clips of GAI, who was in third place at the time, have also been removed from the show’s YouTube channel. Rapper Vava was also removed from the variety show Happy Camp due to her hip-hop connections.

As the Chinese outlet Sina notes, these censorships are due to the State Administration of Press, Publication, Radio, Film and Television of the People’s Republic of China (SAPPRFT), the nation’s top media regulator, which now “specifically requires that programs should not feature actors with tattoos [or depict] hip-hop culture, sub-culture (non-mainstream culture) and dispirited culture (decadent culture).” SAPPRFT also set out the following four rules:

Time will tell whether these government rulings will suffocate or motivate China’s underground hip-hop scene. And, while we might not see any more Sprite commercials featuring artist Masiwei (of the surging collective Higher Brothers), the numbers suggest that there’s certainly a place for successful hip-hop artists, and their peers, in outside markets.

For more on hip hop in China, and its recent global moves, check out our video feature with Chinese-American rapper Bohan Phoenix.