Behind the Scenes of the World's Largest Water Show 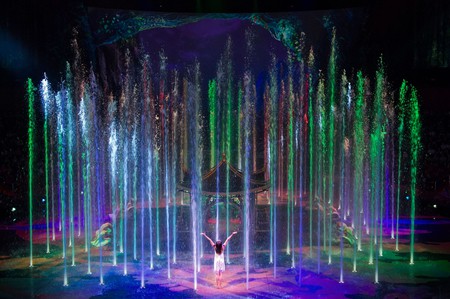 Macau’s $250 million The House of Dancing Water is the world’s largest water-based production. Here’s a look behind the scenes at what it takes to bring this remarkable show to life.

Macau is home to a few world record breaking achievements. Firstly, its casino industry is the largest in the world, it’s also home to the Guinness World Records’ highest commercial bungy jump and, perhaps the most spectacular of them all, The House of Dancing Water – the world’s largest water show – a dazzling production that is nothing short of magical. 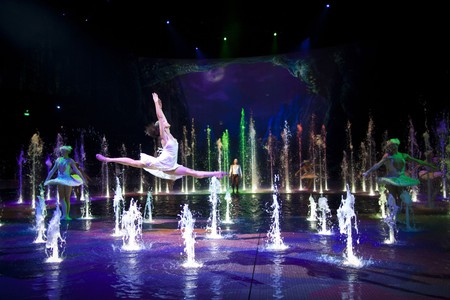 The show opened at Macau’s City of Dreams resort in 2011. It’s housed in a custom made theatre that took five years to build at a staggering cost of $250 million.

The cast and crew will celebrate the show’s seventh anniversary this September. In numbers, this means they’ve performed more than 2,500 shows to over four million spectators from around the world. 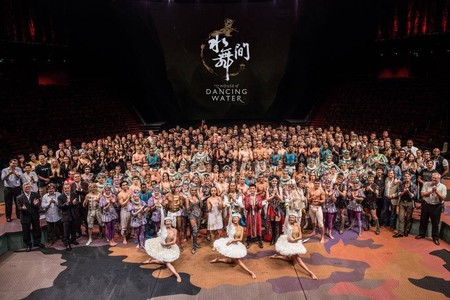 90 performers and 160 production crew work on each show. Photo: Courtesy of Dragone Entertainment

The House of Dancing Water is a classic good-defeats-evil love story of a princess and a handsome stranger who, along with the help of friends and the power of the water, rescue the princess from captivity and an evil queen.

Water is undoubtedly the star of the show. The performance pool is capable of holding up to 3.7 million gallons – the equivalent of more than five Olympic-sized swimming pools. Remarkably, with the help of 11 hydraulic 10-tonne lifts, the stage can convert from an aquatic pool to a solid floor in less than a minute. 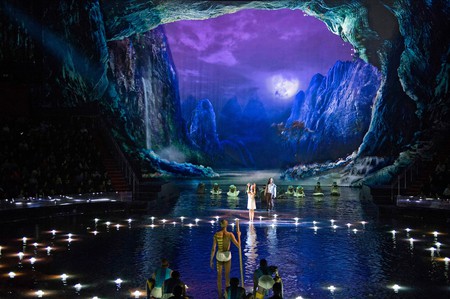 The show is housed in aIt’s housed in a custom made theatre that took five years to build at a staggering cost of $250 million. Photo: Courtesy of Dragone Entertainment

The special effects and water wizardry are exceptional. Not only are the show’s many stunts mind-blowing to watch, but so too is the technical magic – at several points in the 85 minute spectacle, you wonder just how they pull it off.

A cast of 90 international performance artists, many of which are professional high divers and gymnasts, bring the show to life on stage. However, equally worthy of credit are the show’s behind-the-scenes staff who, at a total of 160 production crew, is almost double the number of performers.

Among the production crew, the 30 professional divers in the pool, which the audience never get to see, have one of the most important roles. As PADI-certified dive masters, it’s their job to help orientate the performers and hand them underwater respirators. They wear full face masks that allow them to speak to the artists underwater. 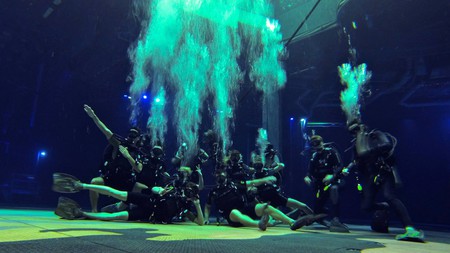 A team of 30 professional divers work in the pool, out of sight from the audience, to help orientate the performers. Photo: Courtesy of Dragone Entertainment

One of the show’s standout highlights is the “dancing water” scene when water blasts out of the ground in time to the music. This is accomplished with 258 embedded water jets which are illuminated with LED lights.

The theatre is a 15-level space, the 10 floors above the stage are for lighting, rigging and a high-tech control room. The five floors below it house hydraulic pumps, stage lifts, special effects and a massive water filtration system and holding tank.

Integral to the show’s magic are its 11 automated stage lifts which can hold 26 tonnes – they’re the biggest in the world. They fit neatly together and can be raised a metre above the stage or dropped seven metres below it, creating a pool deep enough for a diver to leap from a 24 metre (74.7 ft) high platform. 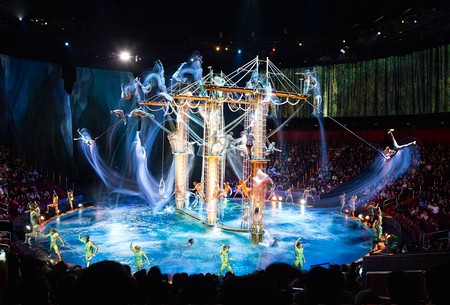 Backstage, the magic continues. It’s here where some 400 costumes are stored. The special costumes designed for the show are made of neoprene, a material chosen to withstand the effect of water. Over 15,000 individual pieces of Swarovski crystal make up the diamond-like buttons and pearls on the performers’ costumes.

One of the show’s most impressive “wow” moments is towards the end. A spectacular high dive is performed from a height of 24.5 metres (80 ft) leaving the audience in awe.

Far from a washout, this one-of-a-kind water spectacle looks set to continue making a big splash for many more years to come.