Yunnan is known for its ethnic diversity. Home to 26 different Chinese minorities, it is rich in culture and a good place to learn about non-Han China. The minority populations in Yunnan range from tiny groups such as the Pumi, to the large populations of groups like the Dai and Yi. What follows is a brief introduction to some of the minority groups every traveler to Yunnan should know.

The Bai people are native to Dali, once the seat of the Nanzhao and Dali Kingdoms, which together spanned a period of roughly 800 years, beginning in the Tang Dynasty. These kingdoms were destroyed by the Mongol invaders of the Yuan dynasty, at which point these minority kingdoms joined China. Most Bai people are Mahayana Buddhists, although the Bai also have a native religion which is a mixture of shamanism and ancestor worship. The most well known Bai tradition is the san dao cha 三道茶, or three course tea ceremony. The courses in the ceremony consist of a bitter tea, a sweet tea, and a third tea that is both bitter, sweet, and a bit spicy. This ceremony is often presented to honored guests and used on special occasions such as weddings. 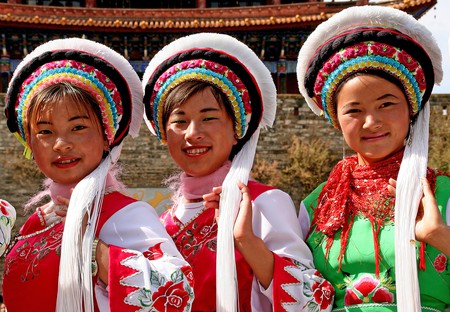 The Dai people, who come from Xishuangbanna, the southern part of Yunnan that borders Laos and Burma, are a close relative of Thai people. Their native language, dress, architecture and religion are very similar. Before Chinese people started traveling extensively overseas, visiting Xishuangbanna was a way for Chinese tourists to have a taste of Thailand without leaving their home country. The most famous festival of the Dai is po shui jie 泼水节, the Water Splashing festival, which generally happens in April every year. During the festival revelers take to the streets and splash, spray, and pour water over anyone they encounter. Water Splashing festival has the same carefree spirit of Mardi Gras in New Orleans or Holi in India, and is generally a great excuse to let loose! 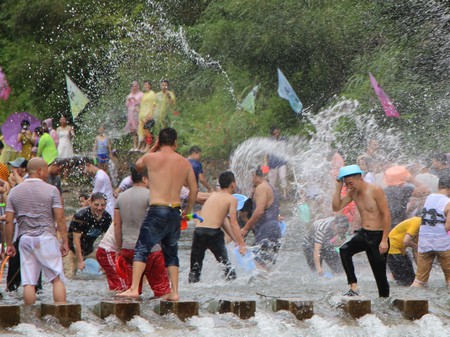 Over half of the nearly 8 million Yi people live in Yunnan province, making their homes in the far flung mountainous regions. Yi communities, particularly those of Daliangshan in Sichuan, traditionally had a highly stratified social structure that consisted of Black Yi, who were the nobles, the White Yi, who were the commoners feudally tied to the Black Yi, and then slaves, who generally consisted of non Yi people. The native religion of the Yi is a form of shamanism, and some Yi still practice this religion today. The Yi are also well known for their musical traditions, and have a number of instruments, including the xianzi (a two stringed lute), which is used to accompany traditional dances. In Yunnan the “headquarters” of Yi culture is in Chuxiong, and a great time to visit is during huobajie 火把节, or the Torch Festival, when giant flaming torches are lit to commemorate a legendary figure named Atilaba, who used flaming pine trees to end a plague of locusts. The Torch Festival is held every year on 24th day of the 6th month in the Chinese lunar calendar, which usually falls around late summer in the solar calendar, although the exact date will vary from year to year. 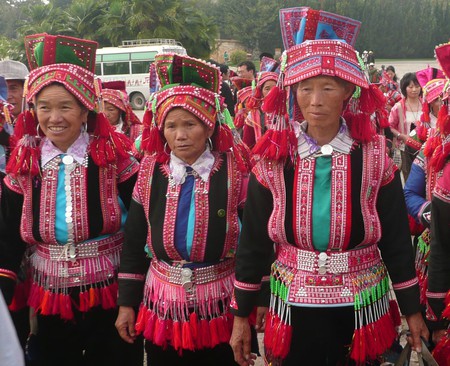 Significant populations of Tibetans live in Qinghai, Sichuan, and also Yunnan. The vast majority of Tibetans are Buddhists and their religion is central to their culture and lifestyle. The Tibetans of Yunnan are mostly concentrated in around the prefecture of Diqin, of which the old town of Shangri-La is the county seat. Shangri-La was formerly known as Zhongdian, but it was renamed Shangri-La, after the mythical city in James Hilton’s novel, Lost Horizon in 2001. It is home to the Gandan Sumtseling Buddhist Monastery , and not far from the Meili Snow Mountain, whose highest peak, Kawagebo, is sacred to Tibetan Buddhists, who perform a holy ritual of walking all the way around this beautiful snow covered mountain. 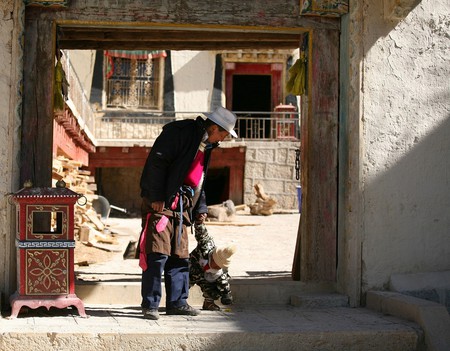 Outside of China the Miao are better known as the Hmong, the hill tribe group that live in China as well as Laos, Vietnam, and Thailand. In the aftermath of the Vietnam war, many Hmong Miao even migrated to the United States, where they now make up a distinct Hmong-American community. The Miao are known for their intricately embroidered textiles and their beautiful silver craftsmanship. Traditionally, a family’s wealth would often be in the family’s silver, which made up a major portion of a bride’s wedding trousseau. In Yunnan, the Miao are scattered throughout the province, with significant populations in Hekou, near the border of Vietnam, and Wenshan. 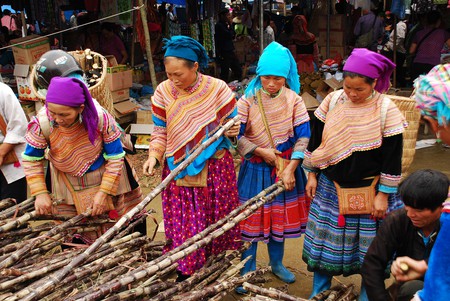 The Old Town of Lijiang, or Dayan, is home to the Naxi people, a mysterious ethnic group best known for their unique Dongba religion and pictographic writing system. While the Naxi were religiously influenced by the Bon religion of their Tibetan neighbors to the north, their culture, and the Dongba religious tradition they developed, became something entirely distinctive. Naxi music, which dates back thousands of years, is still performed today, and preserves musical themes from ancient China. Naxi houses are typically made of wood and Dayan old town and Baisha ancient village both have excellent examples of traditional Naxi architecture. 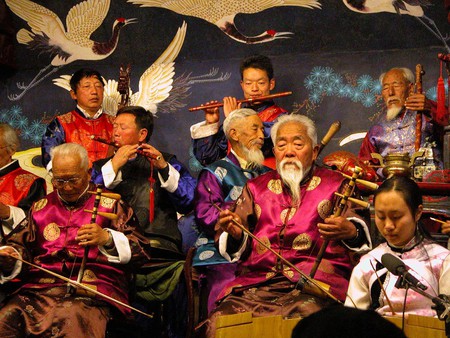 In the far western reaches of Yunnan province, along the border of Burma, live the reclusive Wa. The Wa have a fearsome reputation, mostly due to their old headhunting ways. (no longer practised as it has long been outlawed by the Chinese government). Dancing and drinking, often in combination, are both very important to the Wa, and some research suggests that there is more moonshine consumed per capita by Wa people than any other people in China. Wa dances are sometimes performed to percussion alone, giving their music a tribal, almost African feel, and their traditional clothing heavily features the colors black and red. Wa people are quite distinct from Han Chinese, often appearing more Burmese, or Indian, than Chinese. In Yunnan the best place to experience Wa culture is the township of Ximeng, in southwestern Yunnan’s Pu’er prefecture. 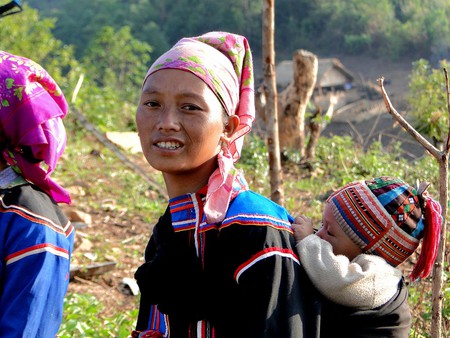 The Wa People | ©Evangelos Petratos/Wikimedia Commons
Give us feedback