An Introduction to China's Mulao People 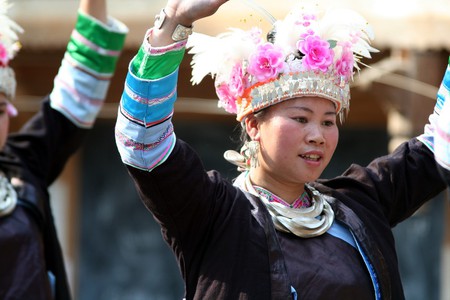 The Mulao, also known as the Mulam, are one of 56 officially recognized ethnic groups in China. They number roughly 216,000 and reside in the rolling hills of Guangxi province.

Nearly all Mulao live in Luocheng Mulao Autonomous County of southern China’s diverse Guangxi province. Luocheng is sometimes fondly referred to as “little Guilin” due to similarities in landscape, namely otherworldly karstic hills surrounding wide rivers. In Luocheng’s case, the rivers are the Wuyang and Longjiang.

Such fertile land has long aided the agricultural pursuits of the Mulao, who developed an irrigation system and other advanced farming techniques during China’s dynastic years.

The Jiuwan Mountains that run through Luocheng are rich sources of coal and other mineral deposits. Thus, many Mulao have turned from farming to coal mining, and the industry has made a largely positive impact on the community, providing well-paying jobs and stimulating the local economy. Of course, pollution is now a concern as is the possibility of labor exploitation. 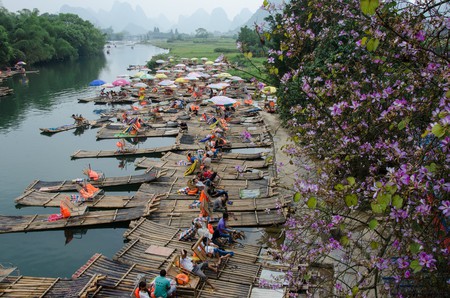 Historical records date the existence of the Mulao to the Yuan dynasty. Of course, it is possible that the Mulao arose as a separate ethnic group before the Yuan, but this was the first time they engaged in feudal life. Twice a year, the Mulao would pay tribute to the Yuan imperial court with an offering of grain.

During the Qing, China’s last dynasty, the feudal system was refined, splitting up Mulao into units of ten households, called dong, whose chief would collect taxes and keep the peace. This system also meant the presence of greedy landlords, who often siphoned off water and other resources for themselves. Naturally, the 1949 establishment of the People’s Republic of China saw such power dynamics reversed.

The Mulao are related to the Dong and Zhuang peoples and share many cultural similarities with them, even at times struggling to maintain a unique cultural identity of their own. The three ethnic groups all speak languages belonging to the Tai-Kadai linguistic family. Mulao and Zhuang are particularly similar. Mulao has long used Mandarin as its writing system, and today, Mandarin threatens to replace the Mulao language completely.

One tradition singular to the Mulao is the celebration of the Yifan festival. Legend has it that lions used to terrorize Mulao land, killing other animals and destroying the crops. During one attack, a girl riding a white horse appeared and shot the lion dead. She remained in the Mulao community, teaching the people how to farm with oxen and water buffalo, how to fight off beasts themselves, and even how to raise taro and sweet potato. The Yifan festival pays tribute to this girl and celebrates the years of good harvest that she brought about.

During the festival, which is celebrated every three to five winters, villagers sacrifice goats and pigs in their temples (the Mulao are traditionally animist) and hold all kinds of festivities, from lion dances to operas.

Ethnic Mulao The Mulao (Chinese: 仫佬族; pinyin: Mùlǎozú; own name: Mulam) people are an ethnic group. They form one of the 56 ethnic groups officially recognized by the People's Republic of China. In their name, Mulam, mu6 is a classifier for human beings and lam (in some dialects it is kyam) is another form of the name used by the Dong (Kam), to whom the Mulam people are ethnically related. A large portion of the Mulam in Guangxi live in Luocheng Mulao Autonomous County of Hechi, Guangxi. more information: https://en.wikipedia.org/wiki/Mulao_people #china #中国 #중국 #仫佬族 #ethnic #民族 #pueblo #Nation #etnik #etnico #Travel #Voyager #reizen #minority #путешествовать #viajar #旅游 #viaggio #culture #ثقافة #Kultur #Minority #cultura #Tourism #fashion #패션 #ファッション #옷스타그램 #style #series / Photographer: 陈海汶