An Introduction to China's Monguor People 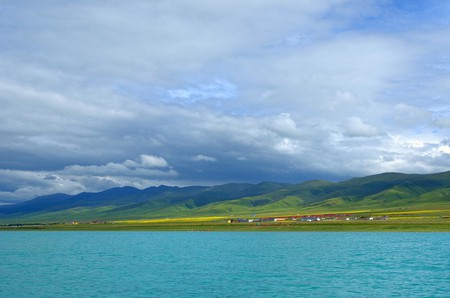 The Monguor are a relatively small ethnic minority in western China whose colorful traditions face extinction in the modern age.

The Monguor, as the ethnic group is called by Western scholars, go by several names. They call themselves the Chaghan Monguor, which means “White Mongols.” Their official name in China, however, is Tu, which may derive from Tuyühu Khan, a possible ancestor of the Monguor.

Qinghai province is large but scarcely populated, and much of it once belonged to Tibet, helping explain the overwhelming number of Tibetan Buddhists within Monguor ranks.

Monguor history is widely contested, with some scholars believing the people to be direct descendants of the Xianbei – or proto-Mongols – and others claiming the Monguor first arose in the Yuan dynasty as mixed-race descendants of Mongol troops stationed in the Qinghai area. Some even believe the Monguor to be Turkic or Han in blood.

One reason it is so difficult to pinpoint the origins of the Monguor is due to wide diversity within the group, as well as the confusing system of classification of ethnic minorities that the Chinese government imposed after 1949. By the time of the Communist takeover, the Monguor had already begun to lose their language. Those who were Monguor but could only speak Mandarin were classified as Han, the term for China’s largest ethnic group. Those who could not speak their language but had adopted Islam were classified as Hui, an umbrella term for Chinese Muslims who don’t fit neatly into another ethnic group. Those who could speak their language and had adopted Islam were sorted into the Dongxiang, Bao’an, and Yugu.

Ethnic Monguor The Monguor (Chinese: 蒙古尔) or Tu people (Chinese: 土族, 土昆), White Mongol or Tsagaan Mongol are one of the 56 officially recognized ethnic groups in China. The "Tu" ethnic category was created in the 1950s. According to the 2000 census the total population was 241,198 and lived mostly in the Qinghai and Gansu provinces. The 2010 census gave their number as 289,565. The Monguor people speak the Monguor language, which belongs to the family of Mongolic languages but has been heavily influenced by both local Chinese and Tibetan dialects. These days, nearly all Tu people can also speak Chinese. Most are farmers, and some keep livestock. Their culture and social organizations have been influenced by Confucianism, Tibetan Buddhism, Taoism, and local beliefs. A few Tu in Huzhu and Minhe are Christian, the result of on-going American and Korean missionary work in the area. more information: https://en.wikipedia.org/wiki/Monguor_people #china #中国 #중국 #土族 #ethnic #民族 #pueblo #Nation #etnik #etnico #Travel #Voyager #reizen #minority #путешествовать #viajar #旅游 #viaggio #culture #ثقافة #Kultur #Minority #cultura #Tourism #fashion #패션 #ファッション #옷스타그램 #style #series / Photographer: 陈海汶

Throughout their disjointed and convoluted history, the Monguor have lost many of the traditions that once made them unique. However, there are still elements of the culture that refuse to die off.

Though most Monguor now only speak Mandarin, two distinct Monguor languages still exist: Mongghul and Mangghuer, both Mongolic languages. In 1979, a script based on the Roman alphabet was created for Mongghul and quickly caught on with those living in Huzhu Tu Autonomous County. Still, the script didn’t help significantly in the preservation of the language.

An estimated 98% of all Monguor are Tibetan Buddhist, and Tibet even considers them part of the Tibetan nationality, despite no historical, cultural, or linguistic ties between the two groups. Their main center of worship is the Youning Monastery, located about an hour and a half from Qinghai’s capital of Xining. Most villages have their own Buddhist temple and Taoist shrine as well.

Unlike their Han neighbors, whose main festival is Chinese New Year, the Monguor’s main holiday is Nadun, a 63-day festival held at the end of the summer, which celebrates the harvest. Celebrations themselves don’t last as long as they once did, mirroring the unfortunate decline of Monguor culture. The festival does, however, nod back to the Monguor’s animistic and shamanistic past, with a medium known as the Fala being a large part of the festivities. Other Nadun traditions include the donning of masks for dances that retell Monguor history. 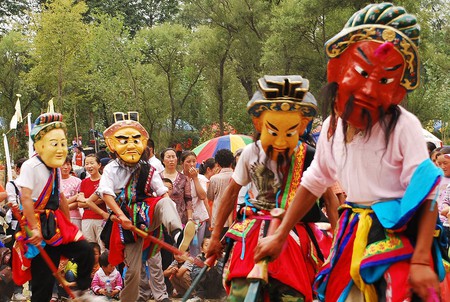