An Introduction to China's Manchu People 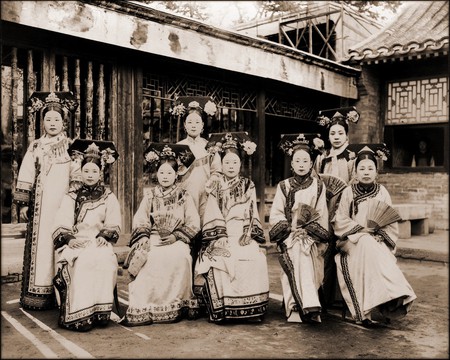 The rulers of one of two ‘foreign’ Chinese dynasties, the Manchu, have been hugely influential on the national culture. Why is it then that they are so invisible?

Despite numbering over 10 million, Manchus in China are nearly unnoticeable against their Han counterparts. The Manchus were the last imperial rulers of China and have contributed significant parts of their culture to the national culture, yet they have also been forced to blend in over the years. To understand why requires a look back at their history. 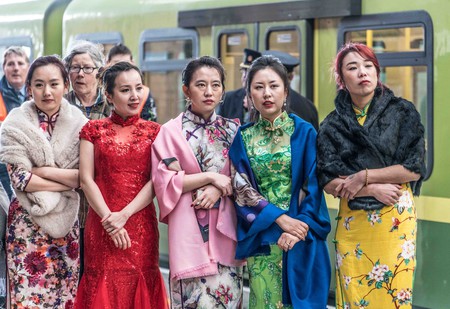 Numbers wise, Manchus form the fourth largest ethnic group in China. They are number one, however, when it comes to minority groups without a designated autonomous region. Historically, Manchus come from Manchuria in China’s far northeast. Though they are now spread out over the whole country, the largest proportion of them can be found in Liaoning province, where they make up roughly 12 percent of the local population. There are also a few Manchu autonomous counties, primarily located in Liaoning and Hebei. 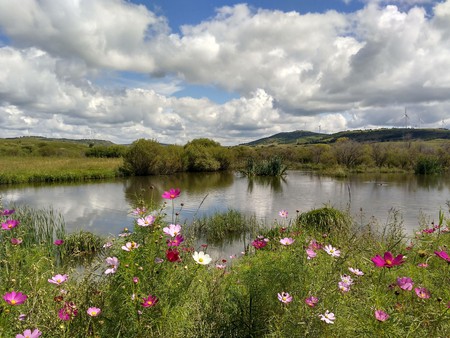 Manchus are direct descendants of the Jurchens, who historically ruled large chunks of northern China through the Jin dynasty. The Mongols, led by Genghis Khan and Ogedei Khan, defeated the Jin in 1234 and separated the Jurchens into two groups: those who were raised in northern China and considered to be culturally Han, and those who were raised in Manchuria and could only speak the Jurchen language. The former group merged with the Han majority, and the latter group Mongolized, resulting in the disappearance of Jurchen language and customs. After being forced to blend in for three centuries, the Jurchens finally rose up in the 1500s. A Jurchen named Nurhaci reunited Jurchen tribes to get revenge on the reigning Ming dynasty, calling his military troupes the Eight Banners. He proclaimed himself Genggiyen Khan of the Later Jin dynasty and moved the capital to Mukden, known today as Shenyang. In a moment of weakness, the Ming formed an alliance with Jurchen tribes, hoping to squelch rebellion from within. They ended up being conquered by the Jurchens themselves, who had been renamed the Manchus by Nurhaci’s son Huangtaiji.

The Manchus then established the Qing dynasty, maintaining the capital at Beijing, which they romanized as Peking, and changing little about the old Ming order. While the dynasty ensured that half of all higher-level officials were Manchu, it pacified its constituents by adopting a traditional Confucian approach to leadership and continuing to employ Ming officials.

Overall, the Qing was one of the longest lasting and most successful imperial regimes. Still, they were always seen as a foreign dynasty, with many Han majority citizens harboring resentment for their ‘non-local’ overlords. Upon the Qing’s final fall in 1911 after the so-called Xinhai Revolution, the Manchus were once again forced to accept Han customs. In fact, there was even a campaign called ‘Give us your queue or give us your head,’ which referred to the traditional Manchu male hairstyle of one long braid on the back of an otherwise bald head. 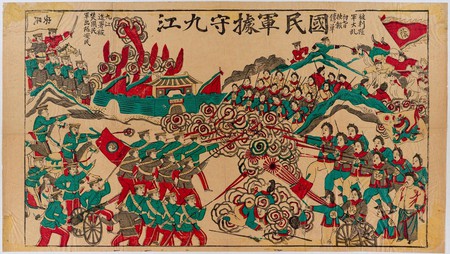 The legacy of the Qing is immense. First, what many people consider ‘ancient Chinese style’ really comes from the Qing. The qipao dress, for instance, was a Manchu fashion that was made sexy during the 1920s. Due to its length and temporal proximity to today, the Qing can be seen all throughout China in the form of architecture, artifacts, and art. Of course, one of the best places to experience the Qing is in Beijing, the capital of both the dynasty and the People’s Republic of China. The infamous white marble boat in Beijing’s Summer Palace, for example, was built under the command of the Qianlong Emperor, using funds earmarked for naval expansion.

Though the Manchus once had their own language, a Tungusic language that used the Mongolian script, there are only an estimated 100 remaining native speakers, most of whom are located in Sanjiazi, Heilongjiang province. There is, however, a campaign to teach Manchu in Liaoning, Jilin, and Heilongjiang schools. 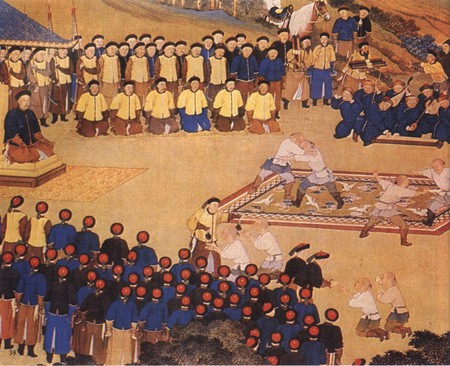 Manchu Wrestling | WikiCommons
Give us feedback