An Introduction to China's Daur People 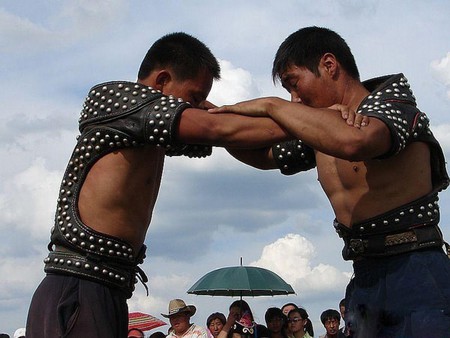 The Daur are a relatively small ethnic group from northeast Asia, numbering around 132,000. They came under Chinese rule in the mid-17th century and are now considered one of the country’s 55 official ethnic minorities.

The Daur live primarily in the Morin Dawa Daur Autonomous Banner in the Hulunbuir region of Inner Mongolia and the Meilisi Daur District of Qiqihar, a major city in Heilongjiang province. A small minority also reside in China’s far northwestern province of Xinjiang, where some Daur soldiers were sent along with those of the Sibe minority to defend China’s borders during the Qing dynasty.

Excluding Xinjiang, the Daur homeland is a cold, dry region punctuated by rivers and grasslands. For most of their history, the Daur lived successfully off of the often unforgiving land through the cultivation of crops like soybeans and buckwheat, the raising of large livestock, and through fishing and eagle hunting.

Today, such livelihoods have been largely industrialized.

DNA evidence proves that the Daur are direct descendants of the Khitan, a northeast Asian people who founded the Liao dynasty, which ruled large parts of northeast China and Mongolia at the same time the Song were ruling eastern China. The Daur are distantly related to the Evenks and Oroqen.

Prior to the 17th century, the Daur lived along the Shilka River in modern day northeast Russia as well as the Heilongjiang, Zeya, and Bureya Rivers. Today, that region is known, among other names, as Dauria.

In the mid-17th century, the Daur came under the control of the Manchu, a fellow northeast Asian people who had recently grown powerful and established the Qing dynasty, which would come to expand China’s borders wider than they had ever been before or would ever be after.

Feeling pressure from the Manchu in the south and the expanding Russians in the north, the Daur had little choice but to migrate southward to the banks of the Nen River. There, they became part of the Manchu’s Eight Banner System, under which conscripted soldiers farmed during times of peace and were sent to fight during times of war. As conscripted soldiers, the Daur played a large part in the Qing’s successful defense against Cossack invaders from Czarist Russia.

Though most Daur can now speak Mandarin, the Daur language has been well preserved. The Daur language is Mongolic in family and retains features of Khitan, which went extinct in 1243.

Shamanism is ingrained in Daur culture. For centuries, no major decision could be made without first consulting a shaman, who acted as an intermediary to the spiritual realm. Today, each Daur clan still maintains its own shaman.

Clan life is also a defining aspect of the Daur. Those with the same surname belong to a group called a hala, which spreads itself out over two or three towns. Each town is populated by a single mokon, or clan, a subgroup of the hala. Intermarriage between hala is encouraged, and the husband moves to live with the clan of his wife.

Sport is highly valued in Daur communities, particularly field hockey and wrestling. The Daur have been playing a version of field hockey called Beikou for over 1,000 years. The game was traditionally played with an apricot root for a puck and long wooden branches for sticks. Today, Western field hockey has been enthusiastically adopted by the Daur. In fact, a third of the 2008 Olympic men’s field hockey team came from Morin Dawa Daur Autonomous Banner.