Michele Aboro, born and raised in London and of Nigerian descent, is one of the greatest living boxers. After a career that garnered seven world titles in both boxing and kickboxing, she retired undefeated in 2001 and relocated to Shanghai where she opened the Aboro Academy with her partner, Yilan Yuen, who is a fine arts photographer. Culture Trip sat down with both women to discuss women in sports, China, and how they hope to give back to Shanghai’s local community. 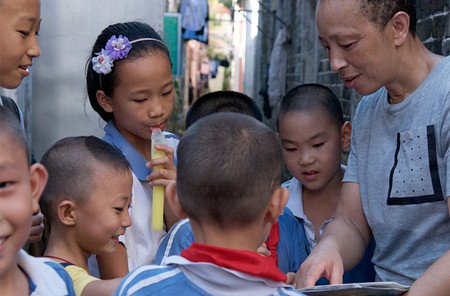 How and why did you get started in boxing?

Michele: The first time I went to a boxing gym I was very young. It was in the area where I grew up, Peckham (London), and there were quite a few boxing gyms. I went to watch and was grabbed from a young age.

I started actually boxing when I was around 16. At that time in England, there was a big hoo-ha about women boxing and women holding professional boxing licenses; in fact, it was only around 1996 that women were (legally) allowed to hold professional boxing licenses. And so a lot of trainers didn’t want to train women as they could lose their license if it was an amateur trainer.

How did you feel the first time you stepped into the ring?

Michele: The first time, to tell you the truth, I don’t remember that much. With the adrenaline going, I just remember from pictures that it didn’t look very nice. I was throwing punches all over the place, and it was quite embarrassing. I won it, but it wasn’t something to be proud of. As fights went along, I was much more in control, of myself, of the situation and my opponent. I enjoyed that feeling of stress, anxiety and adrenaline. Some of the guys that would fight from the gym would be vomiting, some going to the toilet all the time, some would keep pacing up and down the hall. But I loved the feeling of competing. It was something I couldn’t get anywhere else in my life.

Can you talk a little about your rise into the world championships?

Michele: I started off fighting for British titles, then European, then world titles. It was quite strange at the time because I didn’t see them as title fights — I just saw them as fights. I was fighting people who had been training and fighting a lot longer than me, but actually after just two years of fighting, I was already winning British and European titles. It came really naturally to me. So when I won a world title, it was something that was just a matter of time, but it was a great accomplishment for me, from where I came from, and how I got into the sport. 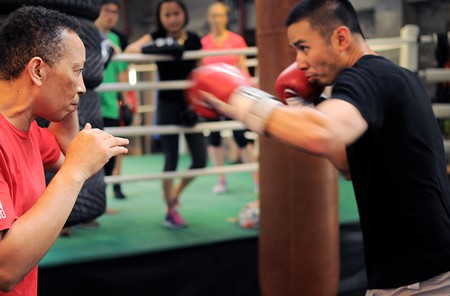 After seven world titles, you retired undefeated in 2001. What was the reason for that?

Michele: It wasn’t related to sports in the least. I left England because I wasn’t able to box — none of the big promoters would sign a woman. So I went to Germany where I was signed by a boxing company called Universal Boxing Promotions; they had some of the biggest boxers in the world signed to them. This is where I wanted to be for the first time in my life where I could actually just concentrate on my sport. I think that was ten years after I first started — I could finally just concentrate on boxing. Through that experience, I was lucky to win two more world titles.

The reason I decided to stop though was because after I was there for nearly ten years, they deemed me ‘unpromotable.’ I was very open about who I was and my sexuality, and they preferred me to be quiet and reserved. My promoter and my manager said the television company promoting our fights wanted to drop me. So I had a long court case with them, which lasted near seven years, all the way to the top of the European court of law. But no judge wanted to get involved in this, and they kicked it out of the courts. So seven years on, I felt like I was just tired of fighting this fight that nobody was willing to change. I dropped the case and carried on just teaching.

Why did you decide to eventually relocate to China?

Yilan: Well, I was the one who came here first because I was working on an art book. It’s about my family story over three generations. Then Michele came here to visit me, and she loved Shanghai. The wellness industry here is still in the very early days.

And you both arrived — did you find the transition to China difficult at all?

Yilan: No actually, we didn’t.

Michele: We have a good lawyer who put everything in place, so we didn’t have to deal with that stuff. Actually, if we were trying to get into England now, it would be harder. In Europe, we don’t have agents who do the visas and everything like we do in China. In fact, China is much easier to set this kind of stuff up than back home. In England, we would have so many regulations we’d have to go through — is it covered by the British boxing union, how we should do it, etc., etc. Here we have much more freedom to run things the way we want to.

You’ve been a champion for gender equality in sports — in particular, addressing discrimination against women in the boxing industry. What was your experience, if any, with those issues in China?

Michele: I haven’t had any discrimination; because of what I have achieved, people have a lot of respect for me. I feel like here people first see your accomplishments and then your gender. But first of all, they are like ‘wow, you’ve done all that.’

Yilan: I think China is a fairly woman-friendly country. At least here in Shanghai. Other places we hear stories you know, but at least for us here, it is very good. 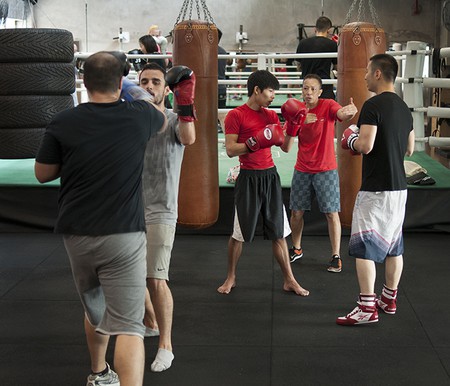 Can you talk a little about your charity, the Aboro Foundation, and what you hope to achieve with it?

Michele: I was one of seven kids in a single parent family in the middle of London. So my mum didn’t have lots of money to splash around. I was lucky that my coaches had the attitude of ‘when you can pay me, you pay; when you can’t, it doesn’t matter.’ So for all of us that wouldn’t have normally had the chance to shine, many of us went on to win titles because of that opportunity. [My foundation] is for people who have the talent and the want to get somewhere physically [in the sport].

Yilan: My family originally comes from China, and it reminds me I have to be very grateful my grandfather gave us the opportunity to be free by immigrating to Holland. Coming back to China has made me realize if you can do something good, then you should do it. And I think it’s the perfect country to do it in.

What goals do you have for the gym and yourselves in Shanghai?

Michele: I want to have a world champion from China and a place where people can come and train in boxing and kickboxing at a high level.

Yilan: It’s not only boxing; we also want more people to have a healthier lifestyle. This is what we are creating here. A lot of people are intimidated to even go into a boxing gym, so we want to create a place that is open to everybody.