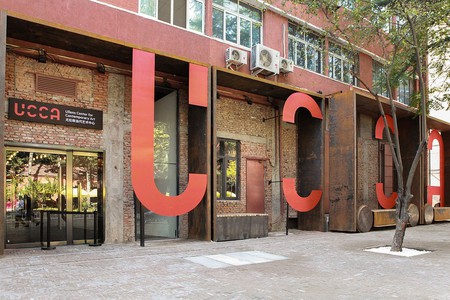 The 798 Art Zone is a place of pilgrimage for art lovers in Beijing. The avant-garde art district used to be a Bauhaus-style socialist factory compound built in the 1950s with the assistance of the Soviet Union and the DDR. In 2002, American Robert Bernell opened his Timezone 8 Art Books bookshop and publishing office in a derelict former factory, and 798 became one of the most famous art districts in China. This is a guide to the best galleries and artistic spaces in the 798 Art Zone. 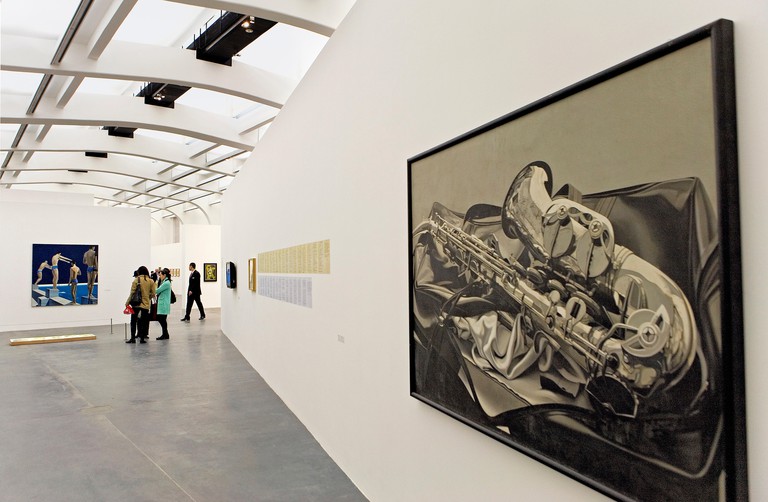 Almost any guide on the galleries of the 798 Art District would put UCCA on top of the list. The Beijing branch of the international contemporary art institution was opened in 2007, and has presented over 100 exhibitions, featuring both Chinese artists and significant figures in international art trends. It is one of the few galleries in China that attaches great importance to education, regularly providing talks, workshops and art cinema, and having a bookstore that sells limited editions of cutting-edge artists and designers. What’s more, it even has its own volunteer docents.
Opening hours: Tue-Sun 10:00-19:00 (Last entry 18:30)

Art Gallery
Facebook
Email
Twitter
Pinterest
Copy link
Share
Map View
The moment you enter the Hive Center for Contemporary Art, you will feel the magical soothing power coming from its greenery wall surrounding the entrance pathway. You may feel like sitting in front of the wall for a whole afternoon, but you know you won’t be able to resist the temptation of the artworks inside, too. The center covers over 4,000 square metres and was founded in 2008. Since then, it has become one of the most influential contemporary art institutes in China. It strives to explore the “Oriental aesthetics” in the context of globalization, so if you would like to observe Chinese contemporary art, Hive is a place you shouldn’t miss.
Opening Hours: Tue-Sun 10:00-18:00
Open In Google Maps
4 Jiu Xian Qiao Lu, Chaoyang Qu Beijing Shi, China
+861059789530
Visit Website
Give us feedback

Forest, Park
Facebook
Email
Twitter
Pinterest
Copy link
Share
Map View
Asking any art-lover which gallery in 798 is most fashionable this summer, you’ll receive the same answer: PACE Beijing. The Living Digital Forest and Future Park exhibition, which combines interactive technology and art by the Tokyo-based multidisciplinary art group teamLab, is so popular with art-lovers and social-media addicts (you can take beautiful selfies there) that the gallery had to distribute numberplates to split the long queues into groups. Find out why this exhibition is so popular by going there yourself; it runs until 19 November.
Opening Hours: Tue-Sun 10:00-18:00
Open In Google Maps
798 No. 2 Jiuxianqiao Road, Beijing, China
+1057626461
Give us feedback

The gallery first opened in Bangkok in 1997 and was later established in Beijing and Hong Kong. It is dedicated to presenting projects and exhibitions that promote contemporary Chinese art, as well as providing a space for dynamic dialogues between artists, curators and collectors. It regularly represents leading Chinese artists including Ai Weiwei, Liu Xiaodong, and Huang Yongping. Its two galleries in the 798 Art District are must-go places for lovers of Chinese art.

CLOSING NEXT WEEK (Hong Kong) | Aura | 31.8 – 27.9, 2017 . Aura, the unique breath of artworks, conveys the sense of alienation with the representation of fantasy. With the flow of vivid colors, artists sketched memories while capturing the momentary impression of dreams. The silhouettes of imagined creatures and human bodies evoke endless fascination and imagination on the infinity of human mind.

A post shared by 当代唐人艺术中心 Tang Contemporary (@tangcontemporaryart) on Sep 21, 2017 at 10:13pm PDT

Art Gallery
Facebook
Email
Twitter
Pinterest
Copy link
Share
Map View
You might not have heard of the Faurschou Foundation, but you must have heard of Yoko Ono. Faurschou is the gallery where Ono’s solo show Golden Ladders was presented last year, and thanks to the show, the gallery became known to a wider group of art lovers in Beijing. The Foundation is a privately owned art institution, with two venues in Beijing and Copenhagen. It has also featured solo exhibitions of Ai Weiwei and Cai Guoqiang, and currently has an exhibition of the world’s best virtual-reality artworks that is on until February 2018.
Opening Hours: Tue-Sun 10:00-18:00 (Closed on bank holidays)
Open In Google Maps
706 Bei Yi Jie, Chaoyang Qu Beijing Shi, China
Visit Website
Give us feedback

Art Gallery
Facebook
Email
Twitter
Pinterest
Copy link
Share
Map View
Founded in 2014, M WOODS is the youngest gallery in the 798 Art District, but its fame has exceeded many of its seniors, thanks to a solo exhibition of Andy Warhol in 2016. The gallery was founded by online celebrity and artist Wanwan and Lin Han, with its English name drawn from the initial of Wanwan’s mother Man and Lin Han’s surname (Lin means woods). It is committed to present the essence of artworks regardless of their origins and styles, which is why you can often see artworks from different countries and eras curated in the same space.
Opening Hours: Tue-Sun 10:30-18:00
Open In Google Maps
Chaoyang Beijing, China
Give us feedback

Art Gallery
Facebook
Email
Twitter
Pinterest
Copy link
Share
Map View
The Pinacotheca of Korean Mansudae Art Studio offers an opportunity to experience North Korea as it is the only overseas gallery founded by the North Korean government, and features artists of the Mansudae Overseas Project Group of Companies (M.O.P), the largest and most famous art complex of the DPRK.
Opening Hours: Tue-Sun 10:00-17:30
Open In Google Maps
Gao Bei Dian Lu, Chaoyang Qu Beijing Shi, China
Give us feedback
Give us feedback