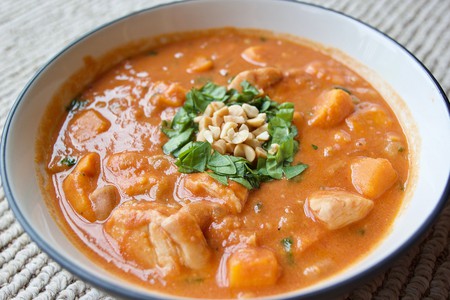 We explore how African chicken ended up becoming Macau’s national dish, and recommend the best places to try it.

Surprisingly, despite its name suggesting otherwise, African chicken is considered Macau’s ‘national dish’. The link between Africa and Macau might not be immediately obvious, but its connection arose through Macau’s Portuguese colonial past.

In the case of African chicken, it’s widely thought that the dish was first introduced to Macau by Portuguese army officers. These officers retired in the city and opened cafés that served foods that they had come to enjoy in the course of their overseas service.

African chicken is considered a variant of galinha com piri-piri, which is popular across southern Africa, and which only became popular in Macau in the early 1950s. The dish is essentially a Macanese take on a chicken curry – chicken, covered in a peanut, tomato and chilli sauce, sometimes with paprika. Over the years, it’s a dish that has come to represent Macau’s unique and multicultural identity more than any other. 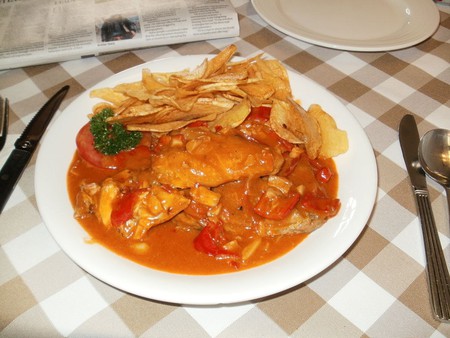 A folklore built up around the dish that it had been around for centuries. However, it is most likely that the dish is only decades old. Popular opinion is that African chicken was introduced by a local Portuguese hotel chef in the 1940s, Americo Angelo, utilising spices he obtained from a trip to Portugal’s African colonies. Many locals can still remember the dish as he cooked it, but few have been able to recreate it since.

However, others believe that the recipe has been passed down by Portuguese families living in Macau over the centuries. Either way, its delicious taste has ensured the dish has stood test of time.

Where to try African chicken

Today, you can try the classic Macanese comfort dish at restaurants all over Macau – it’s become a staple of Macanese cuisine. The African chicken served at Restaurant Litoral is regarded as one of the best in town. Similarly, Henri’s Galley receives five star reviews for its version, and local Macanese restaurant Riquexo, run by 102-year-old Aida de Jesus, dubbed ‘the godmother of Macanese cuisine’, also offers a delicious serving using a recipe that’s been in their family for generations.