A Year on the Yangtze: Trekking China’s River from Beginning to End 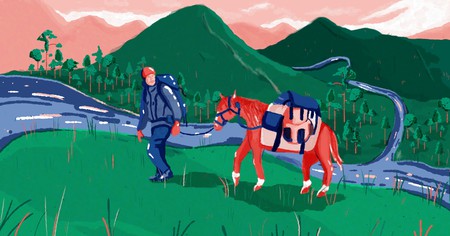 Ash Dykes will spend the next 12 months battling with sub-zero temperatures, thousands of kilometres of dense forest, snakes and even bears as he attempts to walk the entire length of China’s iconic Yangtze river.

No one has ever walked the Yangtze river from start to finish. At approximately 6,400 kilometres (4,000 miles), it is the longest river in the world to flow through a single country. Ash Dykes, an adventurer and extreme athlete from Wales, is now attempting to break the world record and become the first person to trek the entire length of the river by foot. On 26 August 2018, Dykes reached the Jianggendiru Glacier of the Tibetan Plateau, one of the Yangtze’s sources. He is aiming to reach the East China Sea by this time next year. 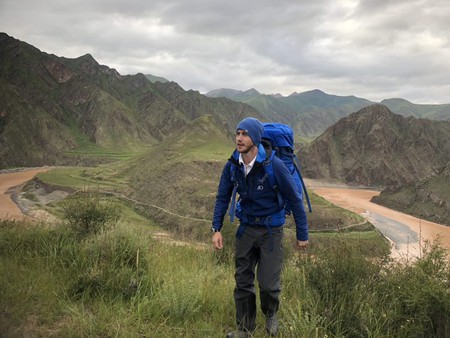 “People have done parts of the river, or done the whole river by boat or kayak, which obviously means that they can cover a far bigger distance each day,” says Dykes. “But no one has walked the entire thing. In reality, there isn’t anything concrete for me to reference.”

Freezing temperatures, extreme altitude, thick forest and cavernous valleys make the journey uniquely challenging. Over an entire year, if not longer, Dykes will take an estimated eight million footsteps while dodging the bears, wolves, snakes and Asian hornets that inhabit the rugged land.

For Dykes, the undertaking of a world first is nothing new. In 2014 he became the first person to trek solo across Mongolia, completing the 2,414km (1,500mi) while pulling a 120-kilogram (265-pound) sled containing all his supplies. Two years later, he became the first person ever to traverse the length of Madagascar through its interior, scaling its eight highest mountains in the process.

It’s a CV with recurring themes: extreme distance, isolation, varied terrain, natural dangers and the unknown. Dykes describes his Yangtze mission as the “bigger, badder brother” of his Mongolia adventure. 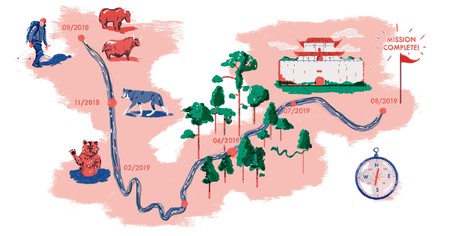 The expedition, however, has already got off to a bad start. Problems with permits, visas and his support team have pushed the challenge back by a number of weeks.

“On the way up the mountain I lost my videographers through a combination of altitude sickness and the extreme cold,” says Dykes. “Then, my local guide was doubled over and I checked on him, his nose was bleeding and he was struggling for breath. He’s a local Tibetan, who lives in a village at about 3,500 metres [11,500 feet] [above sea level], but even he had to turn back.”

Dykes goes on to explain that it wasn’t just the altitude causing problems: “As we were about to cross over from Zadoi County into Golmud, [my local guide] pulled me over and drew the county in the sand and started punching his head, slitting his throat [with his finger] and pointed at me, himself and the horse.

“Maybe it’s one of those myths told to children, or something that happened hundreds of years ago, but he didn’t want to cross [into Zadoi] because of its inhabitants. And then he showed me a video from the news of a bear attacking a family. Safe to say, he wasn’t going any further, so I went back down the mountain with him.”

As a result of the delays, Dykes will still be high up in the Tibetan mountains by the time winter rolls in. “There is no time limit, but the weather is pushing me,” he says. “In Yushu it drops to -30C [-22F] on a clear blue day, so I want to get away from that as quickly as possible.”

The time scale and distance of Dykes’s journey mean his equipment requirements will change significantly as he swaps the glaciers of Yushu for the valleys and forests further east. And, as the expedition is a solo venture, not a race, Dykes is planning immerse himself among the cultures he comes across along the way.

“The walking is the boring bit; it’s the stuff between that’s magic,” says Dykes. “I’ll be meeting new people, going to different festivals and trying challenges along the way. I’ve got to eat one of the hottest chillies in the world and fight a kung fu master at some point. Showcasing survival from local cultures, the country’s beauty, its wildlife – that’s what this is all about. No one wants to just watch a man walking.”

The entire length of Dykes’s incredible journey will be recorded. There will be a documentary upon completion, but as he goes he will be writing articles, posting videos, answering live Q&As and posting media content whenever possible. Dykes’s aim is to be digitally engaged with those choosing to follow his progress, even while staring down gale-force winds or walking around the remains of ancient cities from 3,000 BC.

After two years’ worth of planning and the recent false start, Dykes is itching to get moving. While he is acutely aware of the obvious dangers he will face, it is the chance to explore China in a new and unique way that will be pushing the adventurer to take every step.