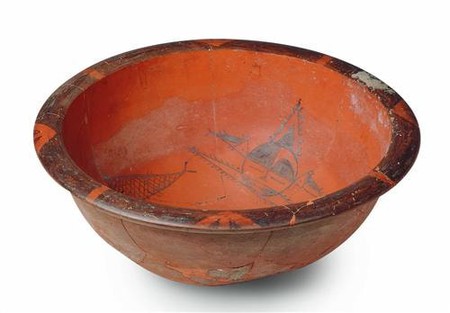 Before you start your tour of the NMC, let Culture Trip take you on a virtual tour of the museum via its most famous 20 treasures (spoiler alert!).

Coming from the Hongshan Neolithic culture dated back 7,000 years ago, it is the earliest jade dragon discovered in China, and thus is known as “the First Dragon of China”. The bluish-green jade has a distinctive curvy shape, and is a perfect combination of exquisite facial features and simple but vigorous body. 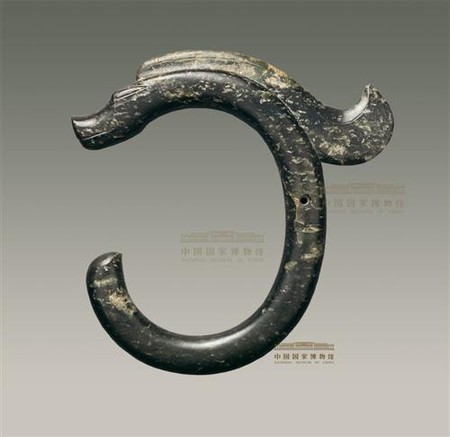 Jade Dragon | Courtesy of the NMC

Jar Showing a Stork with a Fish and a Stone Axe

The jar belongs to the Yangshao Neolithic culture (5000-3000 BC). Having images of the stork holding a large fish in its mouth alongside an axe vividly pressed onto it, the jar was believed to be the coffin for the leader of a clan which used the stork as its totem (and of course the fish was the totem for the enemy clan). The jar is a valuable example of painted pottery from the early age of Chinese history. 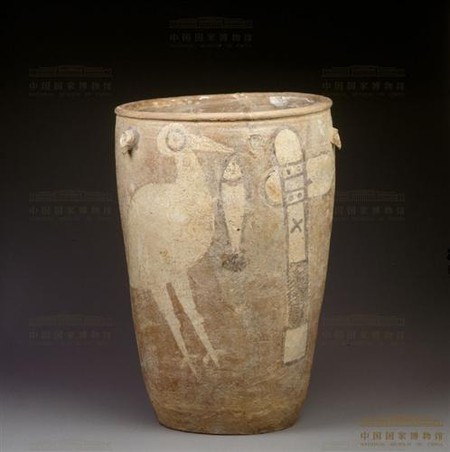 Basin with a Fish Pattern with a Human Face

Also from the Yangshao Neolithic culture, this basin made from fine red clay has black painted decorations of two opposing faces and two fish on its inside. Excavated from Banpo in Shanxi Province, it is believed to demonstrate the fish totem worshipping of the ancient Banpo people, who used to live near a river valley and used fishing as one of their means of life.

The 133cm-tall cauldron with a 112cm x 79.2cm intimidating mouth is from Shang Dynasty (1300-1046 BC), and is the heaviest bronze in Chinese history so far. It is the representation of the most mature techniques of bronze-making in Shang Dynasty. It is named after the three characters “Hou Mu Wu” inscribed on the inside, which is the posthumous name of a Shang king’s mother. The cauldron was presented to Chiang Kai-shek as a birthday gift by local officials after its excavation in 1939. When Chiang fled to Taiwan in 1949, he brought with him 70,000 artefacts, but left the Houmuwuding in mainland because it’s too heavy. 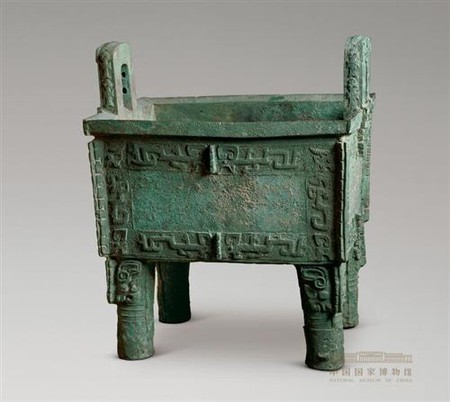 This vessel is an exciting mixture of the solemnity of the square-shaped bronze vessel and the liveliness of the four three-dimensional bronze rams protruding from the corners. It is the largest existing bronze vessel from Shang Dynasty. 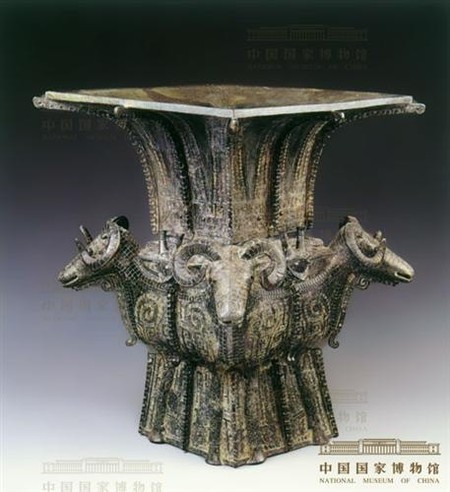 Square Vessel with Four Rams | Courtesy of the NMC

The origins of money in China can date back to the Shang period, which proves that China was one of the earliest civilisations that developed its independent economy. In the time when there were no metal coins, shells were used as the earliest currency in China. 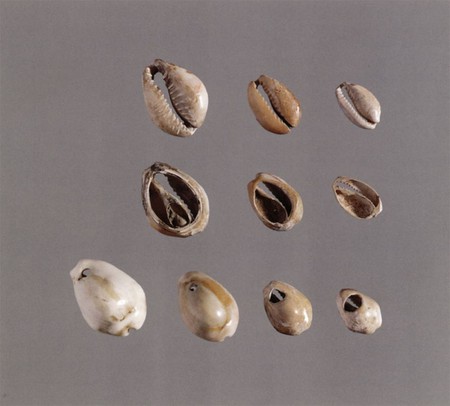 Shell Money | Courtesy of the NMC

Named “Li Gui” in Chinese, it is a ritual vessel for holding and warming grains like millet and rice. Belonging to the West Zhou Dynasty, this vessel has 32-character text inscribed on the inside of its base, which records the earth-shattering campaigns of King Wu of Zhou against the last emperor of Shang Dynasty. 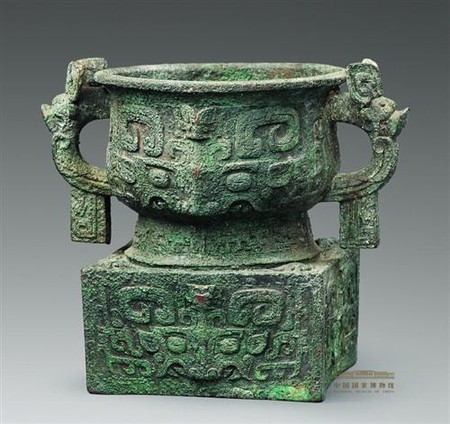 Li Vessel | Courtesy of the NMC

The Da Yu Cauldron is an outstanding example of the dignified modelling of cauldrons and bold inscription style of the West Zhou Dynasty. With the 19-line, 291-character inscription on the inside recording the story of the nobility conferment by the King Kang on the cauldron’s maker Yu, the cauldron is the oldest literature of the nobility-confer appointment system of the West Zhou Dynasty. 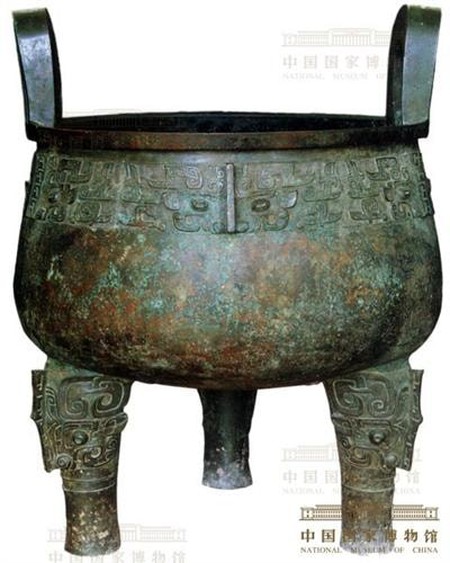 In Han Dynasty, some nobles were buried in the jade suit, sewed up with metal or silk threads as it was believed that jade can preserve the dead body. The gold threads were, of course, used for people of the highest rank. This suit is made of 1,203 jade disks and 2,567 gold threads, and was once burnt in fire during a grave-robbing, but it seems that the suit has become more lustrous because of the fire.

Jade Burial Suit with Gold Ties | Courtesy of the NMC

Seal of the King of Dian 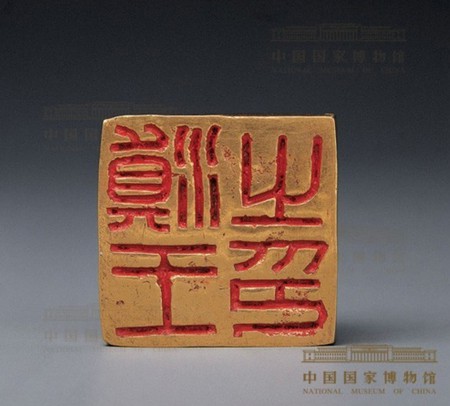 Seal of the King of Dian | Courtesy of the NMC

Tomb Figurine of a Storyteller

This 55cm red clay figurine from the Eastern Han Dynasty (AD 25-220) is a lively portrayal of a joyous storyteller of the time. You’ll be amazed by the sense and skills of the craftsmen to show the comical spirit of storytelling in the Han Dynasty with exaggerated body movement and carefully carved facial expressions. 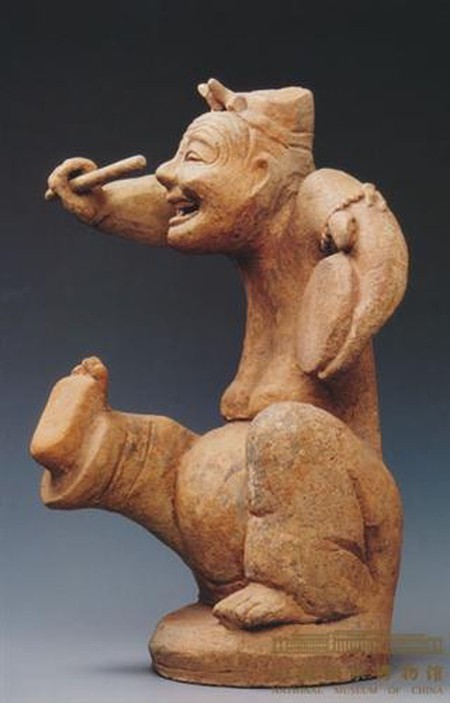 Tomb Figurine of a Storyteller | Courtesy of the NMC

Women’s Jewellery in Shape of Horse Head with Deer Antlers

The gold jewellery exquisitely features a surrealist head of horse with deer’s antlers, with tree leaves growing on them. Used as hair accessories, the leaves will sway along with the movement of women, thus this kind of jewellery has a beautiful Chinese name – “Bu Yao” (meaning “sway with steps”). The “Bu Yao” first appeared in literature from the Warring States period, and became popular in Wei, Jin and Northern and Southern dynasties period. 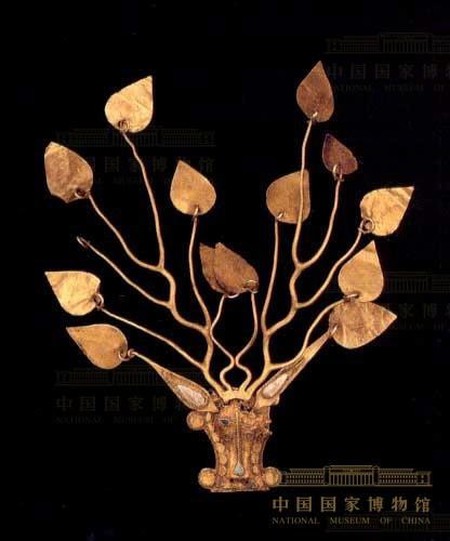 The figurine made of kaolin is believed to be the highest level of the art of Sancai, the polychrome pottery painting art in Tang Dynasty (AD 618-907). What’s also special about the artefact is its depiction of a musical troupe with both Chinese and foreign members, who were from countries west of China. 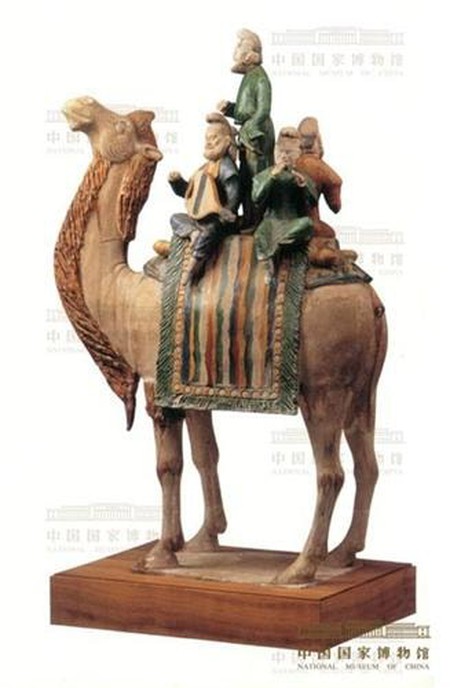 Foodies are definitely going to love these artefacts, as they are the actual dumplings made in the Tang Dynasty and preserved in shape today after its excavation in 1972 in Turpan, Xinjiang. In fact, dumplings have been in existence since the Han Dynasty (206 BC-AD 220). Along with some other snacks excavated along with them, the dumplings are a demonstration of the Han people’s influence on the lifestyle of Uyghur people. 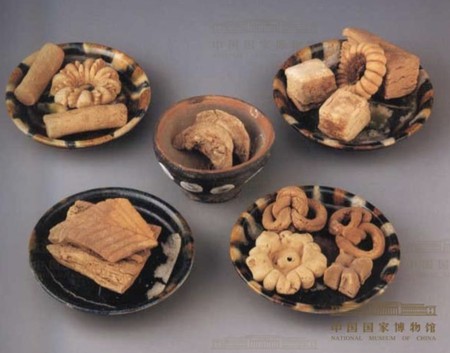 Dumplings and snacks | Courtesy of the NMC

This two-metre-tall statue is the largest wooden statue collected by the National Museum of China. Despite its intimidating size, the tranquil facial expression of the Guan Yin bodhisattva has a magical soothing power on the audience. It is proof of the belief of bodhisattva and the adaption of Buddhism in ancient China. 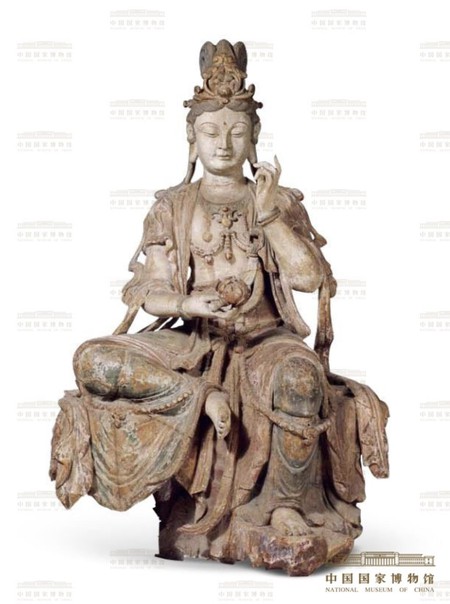 Wooden Statue of the Guan Yin Bodhisattva | Courtesy of the NMC

The plate from the Song Dynasty (AD 960-1279) is the earliest advertisement with logo in the world. Belonging to the Jinan Liu’s Fine Needle Shop, it has an image of bunny pounding with pestle in the middle, with the characters on both sides of the logo saying: “Find us by the rabbit image on the shop front”. Applying the lost woodblock printing technique, the plate also proves that printed advertisement had appeared in China long before Europe. 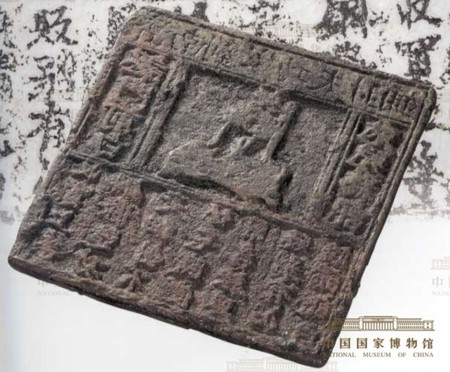 The luxurious coronet with nine dragons and nine phoenixes was very exquisitely made with 1,000 inlaid gemstones and over 5,000 pearls. While dragon represents the emperor and phoenix represents the empress, the coronet highlights the golden dragons and phoenixes in matching positions with an auspicious implication. It was one of the four phoenix coronets found in the Dingling imperial mausoleum in the Ming Tombs. 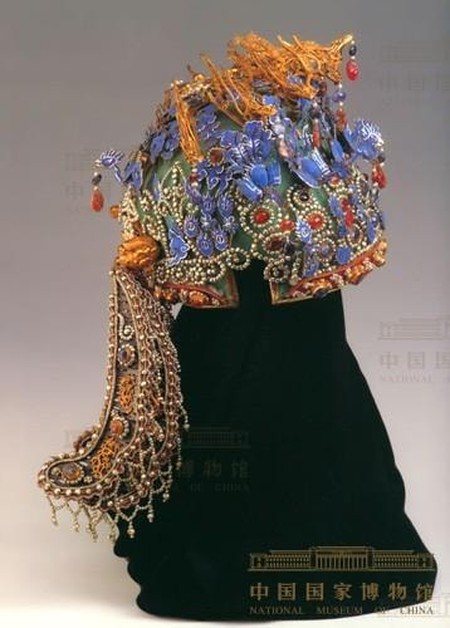 Phoenix Coronet for Empress Xiaoduan | Courtesy of the NMC

The abdication of Puyi, the last emperor of Qing Dynasty, was issued on 12 February 1912, under the arrangement of General Yuan Shikai. It marks the end of the imperial China that lasted for over 2,000 years.

On 1 October 1949, Mao Zedong raised the red national flag by pressing a button on the Tiananmen Square in front of a crowd of 300,000 soldiers and civilians. The flag is seen as a symbol of the founding of the People’s Republic of China. 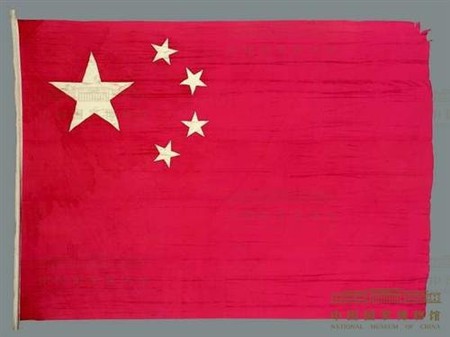 The oil painting created by Dong Xiwen (1914-1973) in 1953 recorded the joyous atmosphere of the founding ceremony of the People’s Republic of China. In this painting, Dong innovatively blended techniques used in Tang Dynasty Dunhuang murals and ancient Chinese portrait paintings into the Western oil painting technique. Dong was asked to change the original painting more than once over the next 20 years, due to the fall of politicians who appeared in the painting. When the government eventually decided to restore the painting to its original look after Dong’s death, it had become too difficult to apply changes to the original painting, so a duplication of the 1953 version of Dong Xiwen’s The Founding Ceremony was made and is now displayed in the NMC, with the authentic in storage. 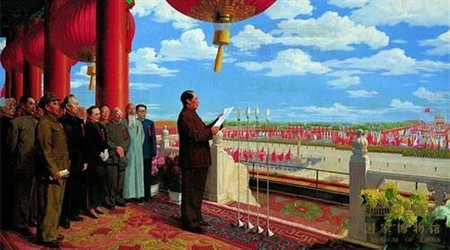 ‘The Founding Ceremony’ | Courtesy of the NMC
Give us feedback