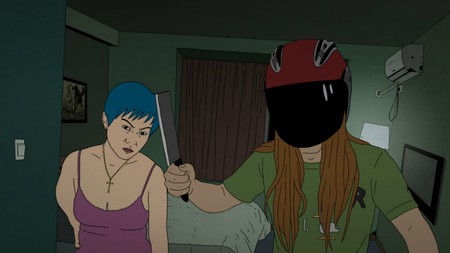 Liu Jian’s animated Have a Nice Day was one of the hottest movies that screened at the recent 2017 Berlinale. Influenced by the Coen brothers, Quentin Tarantino, and Wong Kar-wai, the cynical Chinese crime drama has apparently got everything it takes to become a cult hit.

Set in a grim and seedy city in Southern China, Have a Nice Day follows a succession of crooks chasing a case containing a million yuan (about US$150,000). Xiao Zhang (voiced by Zhu Changlong), who wants to finance his fiancée’s corrective plastic surgery in Korea, absconds with the loot when he’s moonlighting as a delivery driver for the ruthless mob boss Uncle Liu (Yang Shiming). A bad move you’d think.

In a scene that should remind Tarantino-spotters of the Christopher Walken—Dennis Hopper “interview” in True Romance (1993), Liu learns about Zhang’s theft when he’s torturing an old buddy. He sends a butcher-assassin after Zhang, though a punk inventor and his girlfriend have already seized the dough. The girl wants to spend it at a resort called Shangri-La, which allows director Liu Jian to visualize her pop-fed materialistic fantasy.

Liu Jian’s spare, drably colored 2D animation style highlights the urban squalor of the world in which these lowlifes move, and which prompts them to tie their dreams to an ill-gotten fortune.

Capitalism and globalization are Liu Jian’s targets here. IndieWire’s Eric Kohn observes that Have a Nice Day shares some of “the dreaminess” of Wong Kar-wai’s films. But Kohn also suggests in his review that it’s a sociological allegory addressing “overarching feelings of aspiration and disgust with conditions of daily life in modern China, as well as a developing envy for the Western world”.

Allegory or not, Have a Nice Day‘s allure for most Western audiences will likely to be its traffic smashes, black humor, and, of course, its violence. Distribution deals for the film are yet to be announced.