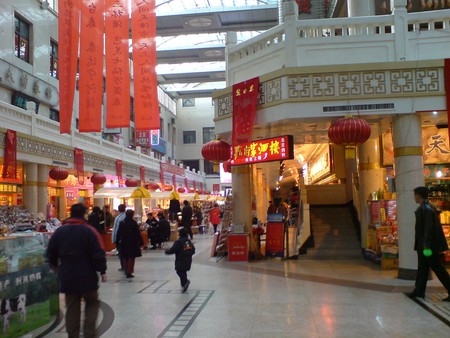 Though Tianjin is an international city with a local cuisine rich with ancient tradition, it wouldn’t truly be cosmopolitan without the presence of its colonial-era European establishments. Ideal for a day-long walking tour, here are three major spots for finding locally-made snacks and international dishes and drinks – get ready to eat and walk your way through Tianjin’s Nanshi Food Street, Italian Style Street, and Ancient Culture Street.

This national treasure of a three-storey, 40,000 square footed food megaplex is located in Nanshi Cuisine Street, among one of the most hectic areas of downtown Tianjin. Prepare to carb up and wander the mall’s countless stalls, shops, and restaurants serving baked pastries and candies – sample numerous cuisines inspired from both Tianjin and from throughout China.

Look for ma hua (麻花), one of Tianjin’s most revered delicacies made of dough and served in a variety of guises: pan-fried in peanut oil, sesame-coated, or just prepared plain. Sample a couple and you should still have room for guifaxiang mahua (桂发祥麻花), a traditional fried dough twist, or erduoyan zhagao (耳朵眼炸糕), fried rice cakes, to round off your breakfast nicely.

Dating back to the colonial era, Italian Style Street is a well-preserved tourism hub today. Accommodating mostly Italian-style cuisines, it’s worth throwing in a German-crafted beer at the end to wash down the pasta and pizza you’ll be having for your late lunch. Just be aware that the food here is quite a lot more in terms of price, especially compared to Nanshi Food Street and Ancient Culture Street, but you won’t leave disappointed. Stroll down this former Italian-occupied street and choose from amid the many restaurants still operated by Italians today.

Italian style Town. It's beautiful yes. But expensive. You can come around take pictures, walk around but don't expect to come here with the aim of satisfying your "hunger" in a good western restaurant. But if you are not hungry and you just wanna try out something, sure. Above all it's a beautiful little town. Worth seeing. #tianjin #travelchina #travelblogger #unlimitedchina #summer #italianstyletown #travel #traveling #asia #silhoutte #italy #china #chinatrip #nightlife #nightphotography #blackgirlmagic

Stop first at Venezia Club Italian Restaurant and Winery for a taste some of the most authentic pizza in Tianjin. It helps that the owner and his son are both from Italy, ensuring high quality cuisine. Try a bowl of penne arrabiata pasta at Pasta Fresca de Salvatore, a colonial mansion converted into a fine dining restaurant, and leave room for beers at Bavaria Bar and Restaurant.

Though Ancient Culture Street is known primarily for its souvenir shops rather than its food, don’t overlook it. This area is full of stands and restaurants similar to those in the mall on Nanshi Food Street, but here the ambience is set amid the cultural context of China. Here you can walk and sample an endless supply of local and national delicacies, including the one locally championed food that has earned its place among one of China’s signature dishes, the delicious baozi buns.

Search for places that serve chatang soup, and set yourself a mission to complete the Four Great Stews (四大扒), a collection of meat stews, that includes chicken, duck, fish, and beef. Skewers of squid, oysters and more are abundant here, as Tianjin cuisine has a close association with seafood. Last but not least is the Tianjin-famous goubuli baozi (狗不理包子), the local version of baozi – try either the meat or vegetarian version. And unless you’ve got room for the local favorite hawthorn berries for dessert, your stomach should by now be more than content with the day’s feast.