A History of Shanghai in 7 Dishes 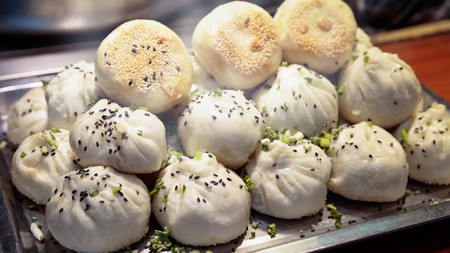 From humble peasant food to clickbait desserts, these seven dishes tell Shanghai’s brief history better than a book ever could.

Legend has it that this uniquely cooked chicken was invented by a hungry beggar who lived in Shanghai’s neighboring town of Changshu sometime during the Qing dynasty. Though the Shanghai of today is one of the world’s largest, most cosmopolitan cities, it started out as a fishing village with origins as humble as beggar’s chicken itself.

The popular Shanghainese dish is said to have been discovered by a hungry man who, after stealing a chicken from a local farm, buried it in the mud of some riverbanks to escape the angry farmer on his tail. Thanks to his quick thinking, the man got away before the farmer could catch him. That night, he returned to the riverbanks, made a small fire, and dug up the chicken. Even hungrier than he was earlier, the beggar didn’t bother to wash the mud off, placing the bird directly on top of the open flame. The heat from the fire hardened the mud into a tight clay, and when the beggar knocked it off, he saw that the feathers fell right off the chicken. The beggar knew he had cracked open a culinary gold mine. He began selling the chicken in his village, and news of the unique dish spread far and wide, finally reaching the emperor himself. The emperor traveled to Changshu and dined in the beggar’s home. He was so impressed with the beggar’s chicken that he officially added it to the imperial court menu, solidifying its place in haute cuisine, a label the dish still carries today. 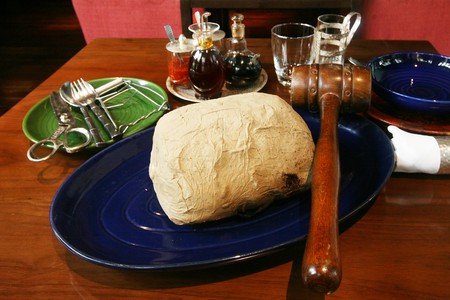 Though ma la tang, a dish literally meaning “tingly and spicy soup,” originated in Sichuan, its more recent history in Shanghai hearkens back to the city’s original vice: opium. Nearly 200 years after China went to war with Great Britain over a trade imbalance “fixed” by the introduction of opium to Chinese port cities, opium still plays a role in Shanghai’s identity.

Though the First Opium War kicked off China’s “century of humiliation” and ruined lives with addiction, modern Shanghai owes its very existence to the war. After the British victory, Shanghai was opened as one of five international ports as per the terms of the Treaty of Nanjing (1842). This drew quick international attention to the city, and a series of subsequent, unequal treaties carved out territorial concessions for the British, Americans, and French, whose unique marks on the city continue to lend it an international flair.

Due to its status as an international port city, Shanghai was the point of entry for much of the country’s opium, even after both opium wars came to an end. And thanks to the disjointed legal environment that arose from so many foreign jurisdictions and administrations, crime went largely unchecked, creating the wild Shanghai of the 1920s.

Now back to the tingly, spicy soup. While many joke that the delicious choose-your-own-ingredients soup is addictive in and of itself, over 35 ma la tang restaurants in Shanghai were shut down in 2016 after it was found out the proprietors were seasoning the broth with opium poppy. With food scares being par for the course in China, the scandal hardly made headlines, but those with a knowledge of history can’t help but see this particular “scare” as standing out from the crowd. 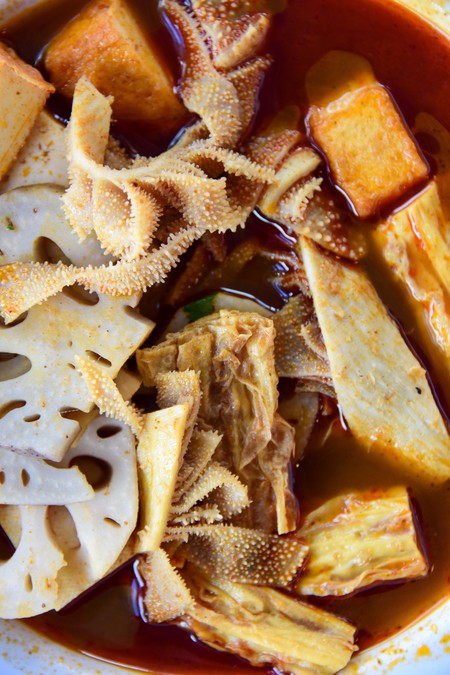 Shanghai has long been a culinary paradise, and despite its cuisine not making the cut for China’s “eight great culinary traditions,” the city has a few specialties that have found fans far outside its boundaries.

The city’s cuisine is called “hu cai,” a name derived from a 4th-5th century term for the mouth of the Suzhou Creek, a river that runs through the city and empties into the Huangpu. Hu cai is broken down into two sub-types, Benbang and Haipai. Benbang is Shanghai’s original cuisine, starting out as peasant food over 400 years ago. It is typified by a light sweetness, found in everything from the mouthwatering sauce of red-braised pork belly to the broth of the beloved xiao long bao.

The origins of Shanghai’s signature dish are somewhat debatable, as everyone wants to lay claim to something as delicious as xiao long bao, but most agree that the story begins around 1875 in the Shanghai suburb of Nanxiang. A man named Huang Mingxian decided he could attract customers to his restaurant by creating a surprising new dumpling. Huang did so by adding aspic to his pork mince so that, upon steaming, the aspic would liquefy and fill the dumpling with soup from the inside.

Though many now associate xiao long bao with Cantonese dim sum or the Taiwan-based restaurant Din Tai Fung, it is as Shanghainese as a dish comes: lightly sweet and delicate on the surface but decadent and rich in the middle. 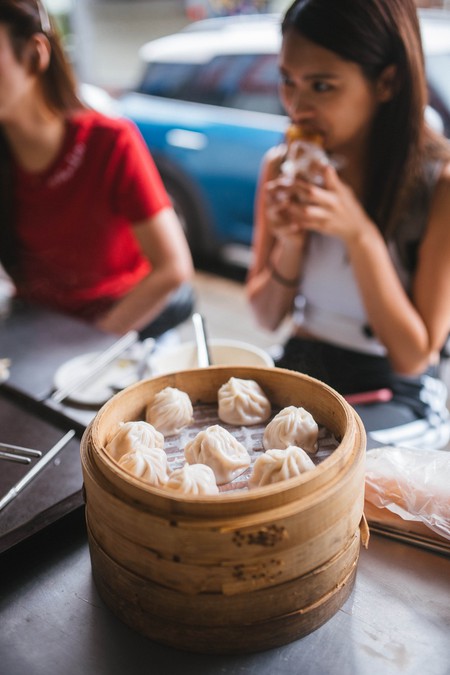 The other half of Shanghai’s hu cai, called haipai, means “all embracing cuisine” and has its origins in the post-opium wars era, when Shanghai first became the Pearl of the Orient. As Westerners brought their own culinary traditions with them, Shanghai became introduced to dishes like potato salad and borscht. But the Western dishes weren’t to Chinese people’s liking. Instead of embracing the foreign foods as they were, Shanghainese people chose to adapt them instead, turning out dishes like zha zhu pai, or fried pork chops.

While zha zhu pai is essentially a schnitzel, it is marinated in wine and ginger and served with a sauce akin to the Japanese tonkatsu. Such a dish, which is still enjoyed by Shanghainese and foreigners alike, embodies everything that Shanghai is: East meets West, impersonation meets innovation.

Shanghai literally means “on the sea,” so it’s unsurprising that the city has no shortage of seafood. A dish that has become increasingly popular is xiao long xia, or crayfish. This little crustacean is eaten like candy in Shanghai, where whole buckets of the things can be purchased almost anywhere, especially in the late summer when they’re at their peak.

For better or worse, xiao long xia also represent one of the last street food strongholds in the city. In a somewhat misguided attempt to improve the health and safety of the city’s dwellers, Shanghai’s local government has spent the last few years cracking down hard on street food vendors. Though the city has always been overshadowed by Beijing and Xi’an when it comes to street-side snacking, Shanghai used to have whole streets dedicated to the art of simple dishes.

Now that it’s hard to find even a decent shou zhua bing (Taiwanese-style pancake) in the city, it is more important than ever to support the vendors who remain. In the summertime, that means eating all the street-side xiao long xia there is. 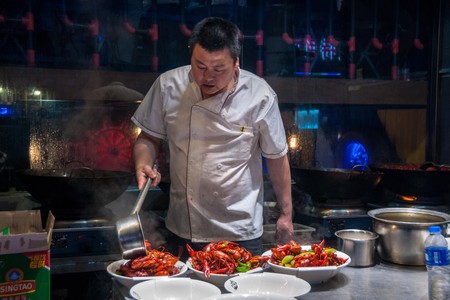 Replacing Shanghai’s cheap eats are overpriced Western-style restaurants that are popping up seemingly overnight. As the city’s residents become increasingly affluent and hungry for Michelin-starred dining experiences, a swarm of restaurateurs have flocked to the city to meet that demand. Unfortunately, most enterprises flop, or in some cases, succeed when they should have flopped, but a few gems have arisen from the dust.

One such gem is Ultraviolet, a so-called “high concept” restaurant that only admits ten diners each night for a 20-course meal and truly unforgettable culinary adventure. For a price tag of several thousand RMB (US$500+), guests are treated to a multi-sensory dining experience that combines sight, sound, and smell with taste. The restaurant, which was awarded three stars by the 2018 Michelin Guide and has consistently made the list of the World’s 50 Best Restaurants since 2013, is helmed by Paul Pairet, a French-born and trained chef, who is changing the Shanghai culinary landscape one daring restaurant at a time.

The dishes at Ultraviolet are largely shrouded in mystery, as is the whole experience, from the exact address of the place to the 20 courses themselves. A few lucky journalists have reported back, letting those who will never be able to afford a meal at Ultraviolet know how sophisticated the egg gruyère raviolo (the singular form of ravioli) is and how refreshing the Yakult, orange blossom ice cream tastes. 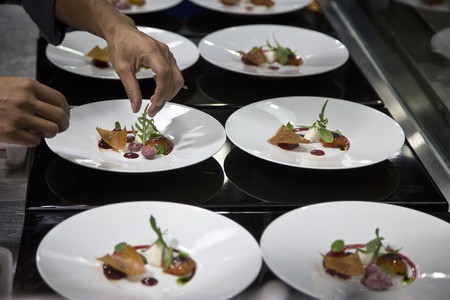 A place that started out as a fishing village has – within the course of a few hundred short years – made a name for itself as one of the world’s most advanced and trendiest cities. Yes, the Shanghai of today is hardly distinguishable from that of even twenty years ago, with the famous Lujiazui skyline as proof.

As the city continues to birth KOLs (key opinion leaders) and fashion designers, its food has also evolved at lightning speed.

Every day in Shanghai comes with a new food trend, all of which are centered around the idea that food should be beautiful. Though China has no Twitter personalities or Youtube celebrities, it has hundreds of Weibo stars, who use China’s second biggest social media platform to reach millions of followers. This has led to an abundance of trendy desserts that one Weibo star can turn into a sensation overnight with a single post and that everyday Weibo users hope will be their big break.