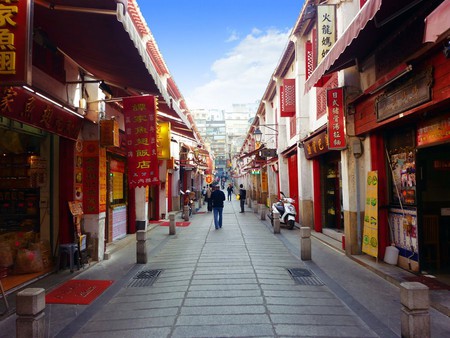 If any street in Macau can elicit a smile, it’s purportedly Rua da Felicidade: ‘Happiness Street’ in English. Shedding its past as the heart of the city’s red light district, it’s now one of the most popular streets for discovering delicious local delicacies and souvenirs.

If Macau’s city centre, Senado Square, is a vision of European style and architecture, Rua da Felicidade is about as traditionally Chinese as one can get. Together, they represent the unique assimilation of Portuguese and Chinese influences that define Macau’s unique heritage.

Happiness Street is distinctive because of its small Chinese-style shuttered terraces. These two-storey homes that line the street, painted mostly in traditional Chinese red, make it both a scenic and photogenic place to come for a stroll. What’s more, it’s home to several quaint shops and eateries that serve up some of the best local snacks and souvenirs in town. 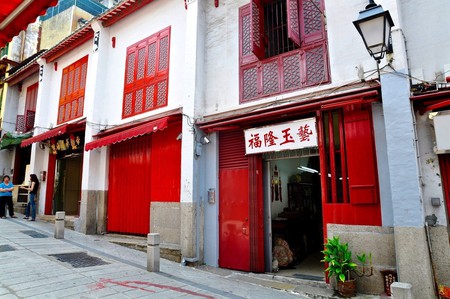 Rua de Felicidade, meaning ‘the street of joy’, has origins in a seedy past. The street used to be the city’s main red light district – a place of prostitution, gambling, drugs and drinking. From the period of 1862-1874, during China’s Qing Dynasty, the area was filled with brothels and opium dens. However, by the late 1960s, most of this illicit activity had declined.

In 1996, the street underwent a renovation. The colours of the doors and shuttered windows were painted red, and much of the traditional appearance of this 150-year-old cluster of buildings was restored. 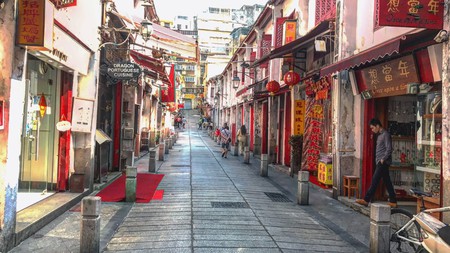 These days, lined with small retail shops and local eateries, the street is completely reborn and has become one of the most emblematic and unique heritage sites in the city. Some movie lovers may even recognise the street from the Hollywood film, Indiana Jones and the Temple of Doom, where it featured as a backdrop in some scenes.

One of the street’s most notable eateries is Cheong Kei Noodle (68 Rua da Felicidade), considered one of the best known noodle houses in the city. Here, they still make noodles using the traditional method of a bamboo pole to knead the dough. The prawn roe wanton noodles are a must-try. 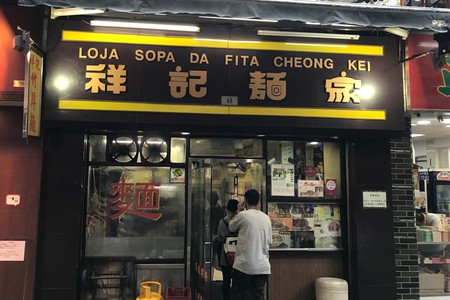 The street is also home to Macau’s oldest guesthouse. The SanVa Hotel (65-67 Rua Da Felicidade) has been operating as a guesthouse since the 1930s. With more than 30 rooms and some of the most competitive room rates in the city, it’s well worth considering. Not only will you be in the heart of Happiness Street itself, you’ll also be on the doorstep of Macau’s main sites and attractions.

All in all, Macau’s Happiness Street doesn’t fail to live up to its name. It’s the perfect spot to come for a stroll, a browse and a bite to eat, offering an opportunity to discover the true charm and character of the city beyond its well-known casinos.