A Guide to Eating Breakfast Like a Local in Shanghai 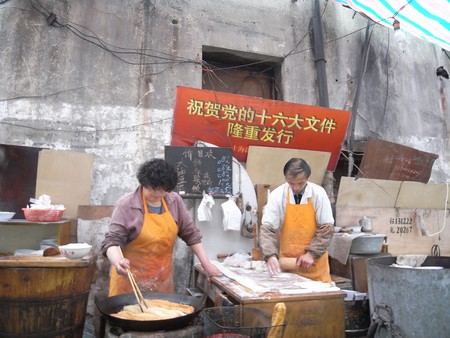 There’s a saying in Chinese that in the morning, you should eat breakfast till you’re full, you should eat lunch well, and eat less at dinner. Local residents very much take this saying to heart, and in the mornings can be founding loading up on their way to work with carb-heavy goodies that fill the stomach, warm the soul and get them ready to take on the day. In the morning, do as the locals do and check out these delicious breakfast foods.

On the top of the agenda of breakfast foods are what the Shanghainese have deemed “the four warriors” (sìdà jīngāng, 四大金刚) nicknamed such because they have been the cornerstones of breakfast food for generations. They’ve not only stood the test of time, but they also effectively fight off hunger. The grand quartet starts off with flatbreads, which effectively translate to ‘Dabing’ (dà bǐng, 大饼) or big bread. Baked in coal ovens, they hold a pocket of warm air and are fragrant with sesame seeds. Number two are the fried dough sticks (Yóutiáo, 油条), light as air, which should be eaten straight out of the deep fryer and pair perfectly with the third warrior, silky soy milk (doujiang, 豆板醤). Finally, there is the Shanghainese favorite, cifangao (Cí fàn gāo，糍饭糕). Akin to a rice burrito (sans tortilla), fresh, fragrant rice (or purple rice) is rolled around fillings like crispy wonton skins, pickled vegetables, pork floss and more. The combination is sure to wake up the taste buds and stick to the ribs. 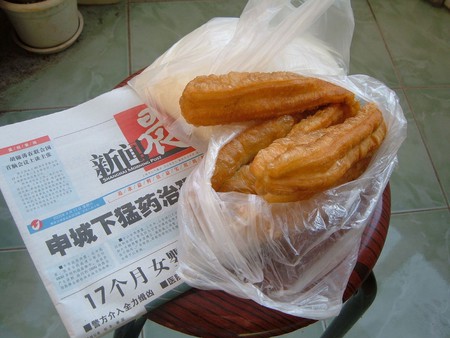 However, one cannot live on the big four breakfast foods alone. There’s also a variety of morning snacks that come wrapped in delicious packages. First off are the famous Shanghai soup dumplings (Xiǎo lóng bāo, 小笼包), which are steamed in bamboo baskets and ooze delicious, porky broth along with the meatball inside. Under the basket of dumplings, you might find shaomai (Shāomai, 烧卖) also being cooked up. These are filled with glutinous rice, flavored with dark soy and little pieces of preserved pork. 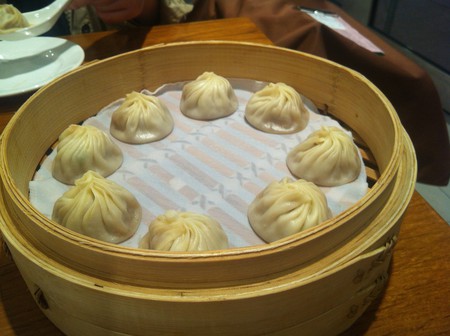 For more porky goodness, head to the big cast iron pans that are set up on many corners of the city, and tend to draw a crowd. In them, you’ll find steaming potstickers (Guōtiē, 锅贴) and round, puffy fried buns (Shēng jiān bāo, 生煎包). Though dumplings are Northern Chinese in origin, the waves of Chinese immigrants who arrived in the early 1900s brought with them their local cuisines, and dumplings quickly stuck. Be careful, one of the Shanghainese innovations was adding a little bit of soup and pork with a high fat content, so bite into them with care – hot soup awaits within. 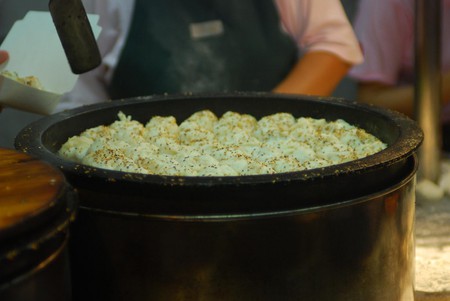 For another dose of carbohydrate goodness, check out scallion pancakes (Cōng yóubǐng, 葱油饼). These are harder to find in Shanghai, so one should head straight to the A Da Scallion Pancake stall at No. 4, 120 Second Ruijin Road, where a man named A Da has been making his famous scallion pancakes for more than three decades. If you don’t get there as early as possible in the morning, be ready to wait in line. But don’t worry. The flaky creation is redolent of green onion flavor, crisp on the outside and smooth on the inside. 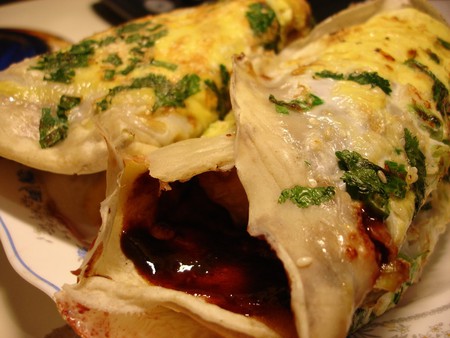 Finally, for your last dose of carbohydrate goodness, head to a jianbing (Jiānbing, 煎饼) stall for one of the best breakfast foods known to man. Jianbing is another one of those foods that originated from Northern China, and then was given a subtle twists to suit a more southern palate. In Shanghai, a thin crêpe (made from three different flours), is cracked with an egg, and then smothered in sweet bean paste, sprinkled with green onions, pickled radish, cilantro and finally a strip of crisp wonton skin. Folded all up, it’s a medley of flavors and textures, an absolutely wonderful food that one could eat every day.