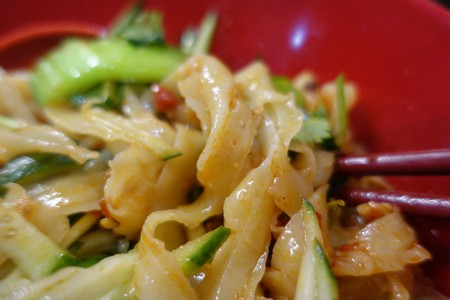 Sliced noodles, a Shanxi-province specialty, are an art form famous as much for their taste as for their preparation.

Dao xiao mian, or sliced noodles, may look similar to their southern cousin the ho fan noodle, but the preparation and taste are wildly different. Both cuts result in wide, thick, and often unevenly shaped noodles, which are perfect for stir-fries and soups, but dao xiao mian requires a skilled chef and a sharp knife whereas ho fan is much more pedestrian in its preparation and taste.

Unlike the rice-based ho fan, dao xiao mian are made with a hearty wheat dough and carry a much heavier flavor. Those practiced in the art of noodle-slicing are able to take a single block of dough and, with a kung-fu like move, slice individual noodles off directly into a pot of boiling water. To watch such a noodle-maker is to watch a dance performance, to eat his or her noodles, like digging into a Picasso. 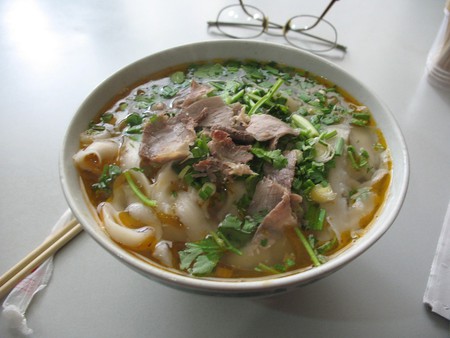 Such a technique can take years to perfect, but it results in noodles that are thicker in the middle and thinner on the edges, just like they were intended to be. Those getting hungry from all this talk of noodles may be inspired to try the dao xiao mian out at home, but chefs new to the art form may find that its easier to cut the noodles off one at a time instead of in a constant loop.

Dao xiao mian also differ from ho fan in their place of origin. Ho fan noodles are characteristic of Cantonese cuisine and typify the south’s predilection for rice-based dishes. Dao xiao mian, on the other hand, come from Shanxi, a history-steeped province in China’s north famous for its grottoes and caves and, yes, noodles. 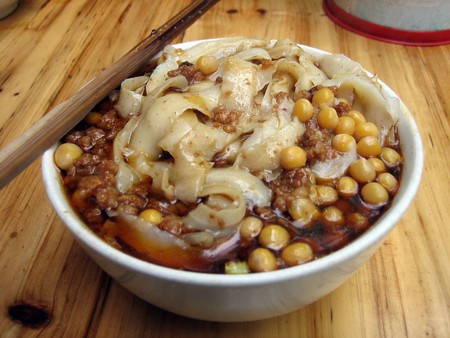 Though the province is often confused with its western neighbor Shaanxi (note the extra ‘a’), Shanxi can easily be remembered by its culinary singularity. In fact, Shanxi is famous for its wide range of noodle types, some found nowhere else in the world. Luckily for foodies, however, dao xiao mian have transcended the borders of the province and gained popularity across the whole of China.

There are a few types of Chinese noodles that are as associated with their preparation as they are with their taste, with another noted example being the longevity noodle, which – thanks to an enterprising chef from Chengdu – is now prepared with a dance that ensures a super-long, unbroken noodle and attracts curious onlookers. Dao xiao mian are still rather unique, though. In fact, the way that a skilled chef cuts the dough block makes it appear as though the noodles were flying into the pot themselves, having a mind of their own.