A Comprehensive Neighborhood Guide to Tianjin 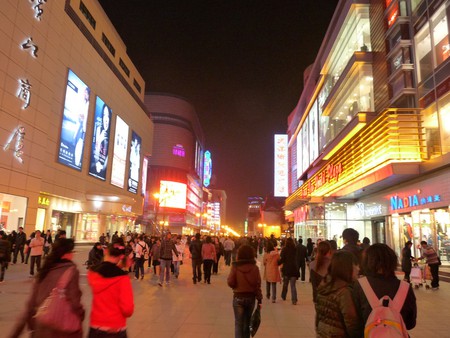 Tianjin is more widespread than it appears – it’s one of the largest and most populated regions in China. Composed of 16 districts, the only ones you are likely to be venturing to are the seven urban districts – unless you’re in Ji county on your way to Huangya Pass Great Wall. Whether you’re seeking history, delicious food, or dazzling shopping centers, all are within Tianjin’s downtown city limits – here’s our guide to the neighborhood.

The center district of urban Tianjin is where you can shop – try Binjiang Street’s shopping malls and department stores – and take in the high-end hotels and tall office buildings on Nanjing Road and in the CBD (Central Business District) . The Five Great Avenues boast the widest range of colonial architecture (the largest of its kind in China) and rank among the most-visited tourism area in Tianjin. Jiefangbei Square was considered China’s Wall Street in pre-World War II times, with many banks still standing. Heping Lu (Street) is a commercial street over a century old, with plenty of ways to spend your money.

Most of Tianjin’s greatest tourism places are all here: Quanyechang Shopping Street and Mall stands as lively as it can for an early 1900s French commercial center. Have fun roaming the expansive Five Great Avenues and the hundreds of colonial villas.

There’s a seemingly limitless amount of food kiosks and shops on the aforementioned roads that should satisfy your hunger, but if you’re looking to sit down and enjoy one of Tianjin’s best pizza restaurants, check out Tube Station on Nanjing Road.

Its literal translation means ‘district east of the river’, and Hedong is right beside the famous Hai River. This is likely to be the first district you see in Tianjin – the Tianjin railway station is here, so you’re highly likely to have your last meal in the area before you get on the train. This district is also home to two prestigious universities, including the Tianjin Conservatory of Music and Tianjin Polytechnic, as well as the Russian concession and the Hedong library.

Hedong is more of a short-term transit district for most of its visitors, and you’re likely to not spend too much time here. But if you do, and you happen to be a music-lover, visit Music Street or The Tianjin Conservatory of Music.

Wanda Plaza is the main center of entertainment in this district, with plenty of international and Chinese places to eat. But don’t leave without trying out the revered Haidilao Hot Pot dining experience, including live chefs and dozens of foods to dip in hot broths.

This quieter residential neighborhood area of Tianjin is home to many schools and universities. Hexi literally means ‘west of the river’, and is in the southwestern section of Tianjin. It’s highly unlikely that you will find yourself here unless studying at Tianjin Foreign Languages Institute or teaching at Tianjin International School, but if you do, there are a few things to entertain.

Again, Hexi is a less bustling side of Tianjin, but there are ways to take advantage of this. Visit Tianjin Art Museum as it’s considered one of the best museums in town, or stroll in People’s Park or Hexi Park to escape hectic city life.

You won’t find Tianjin’s best diners here, but let that be an excuse to go local. Try steamed dumplings at the wooden decorated Sheng Qing Yuan BaiNian restaurant, or, if you haven’t yet, get a taste of China’s version of fast food at Dicos.

Rivaling Hedong with the highest number of important Tianjin landmarks, Nankai district is home to a few of China’s most prestigious universities, including Tianjin University and Nankai University. This is the international student-life hub of Tianjin. Dating back to the Ming dynasty, Nankai was once the heart of the Tianjin, walled with a major defense system against foreign invaders.

The Olympic Village has been transformed into a leisure megacenter, full of luxury retailers, shops, places to eat, billiards and a cinema. Schedule a visit to see the campus of Nankai University, one of Tianjin, and China’s most revered universities.

A bite at Alibaba restaurant is warranted if in Nankai. Despite its notoriety, Alibaba is a true symbol of the rugged yet glorious college-life in Tianjin. Ancient Culture Street is a must for shopping for locally made trinkets and for grazing a replica village of ancient Chinese culture.

The ‘north of the river’ district is located on the north end of Hai River and contains some of Tianjin’s most unique cultural relics. A less-populated district, Hebei is where you’ll end up if taking a long-distance bus to Haungya Pass Great Wall. Plan to visit Hebei for things you probably haven’t seen in Tianjin yet.

Ningyuan Park is the largest of its kind in Hebei district. This majestic landmark is a blend of elements from both the Occidental and Oriental worlds. Beautifully bound with lakes, waterfalls, and stones, this park will enchant you with its elegant bridge and waters.

The five-storey Quanjude roast duck restaurant serves a prestigious platter of duck dishes. Though a bit pricey, if you haven’t had the chance to try a first class Peking-style duck experience in Bejing, with private rooms and butlers, this is your chance.

Named after the bridge of Dahong, this smaller district has the prestigious Wellington College International, an English boarding school that is one of the very few schools with satellite campuses in China. If you’re a history buff and want to explore, try Martyr Cemetery or Tianjin’s largest mosque.

The Great Mosque is worth the visit. It’s a departure from the Catholic cathedrals and the Buddhist and Taoist temples that you’ve been used to in Tianjin. Built in 1644 out of wood, the mosque is still used by the local Muslim community.

To have a truly authentic northern China dining excursion, visit Yixiang Chun Bamboo Seafood at the Long Serene Garden Hotel, an extravagantly lavish yet traditional restaurant. Take your wallet – prices are a bit on the expensive side, starting around 178 RMB.

40 miles from downtown Tianjin is the vibrant coastal district, Binhai New Area. And more notably within this district is the TEDA (Tianjin Economic-Technological Development Area). It’s also the nearest sea coast for Beijing. TEDA has practically grown into a city of its own right – various Fortune 500 companies have built branches here and this district’s Special Economic Zone is intended to rival the rapid innovation of Shenzhen and Shanghai.

Although a business district, check out the Hilton Eco-City within Sino-Singapore Tianjin Eco-City, a city supposedly built on clean energy. Even as a tourist, you’ll enjoy wandering the giant halls of this modern marvel of a village. Also, check out Binhai Aircraft Carrier Theme Park, a Russian warship converted into a fun family extravaganza, with themed rides and shows.

TEDA’s international community enlightens this neighborhood. A favorite among expats is the Parrot Restaurant and Bar, serving roasted BBQ ribs, fish and chips, and other unmissable Western dishes.