These fruit and vegetables look perfect. There’s a giant watermelon, dark stripes arcing up its pale green surface, rich red pulp beneath. Or how about a banana that you can peel to reveal the curved fruit within, or potatoes dusted with flecks of ‘dirt’ and the odd blemish, their firm form perfectly ready for the saucepan or the oven?

But all is not as it seems. The produce is the creation of Chen Yuping, a Chinese chef who uses soft dough to make fake food. 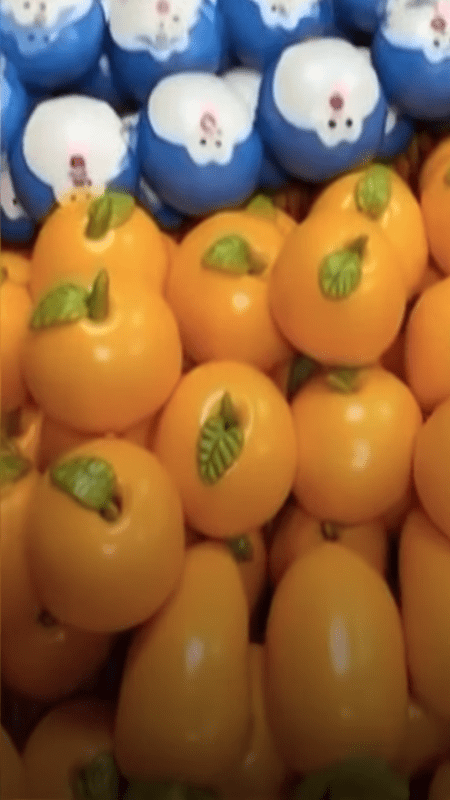 Flour mixed with fruit and vegetable juice are the core ingredients for her ultra-realistic buns, which use colour and texture to brilliantly mimic the real thing.

Yuping, from Guizhou province in Southwest China, started making fake fruit to encourage her toddler-age daughter to eat a wider range of food. “Many kids don’t like to eat proper meals,” she explained to the South China Morning Post, “so I wanted to make something that can improve their appetite and is nutritious as well.”

The inside of her buns vary. The watermelon contains realistic-looking red dough, but no seeds or juice. The famously stinky durian fruit (a seasonal delicacy in Southeast Asia) is covered in sharp-looking spines, behind which are neat, oval and entirely fake seed pods. Her potato makes less effort to disguise itself: it has a ball of chocolate-flavoured dough at its centre.

Yuping’s food has got plenty of attention, good and bad: some online commentators find it unsettling, and others congratulate her ingenuity. She’s got enough admirers to run classes, where students can gather to replicate her efforts – although not everything looks quite as picture-perfect as the basketfuls of fruit and vegetables visible in her videos.

A history of fake food

The making of fake food is part cookery, part art, and Yuping isn’t the first person to create eerie fusions of the two. Stone-age painters used vegetable juices and animal fats in their cave art, while the Egyptian pharaohs were buried with everything they needed for the afterlife, including models of fruit and mummified dried meat. And plenty of Renaissance painters produced still lifes of apples, oranges, meat and vegetables that look eerily realistic.

The pineapple is one of the most famous examples of a food that was bought to be looked at rather than eaten. In Europe, the tropical fruit was brought back from the Americas by explorers, who found that it was sometimes hung in front of people’s homes in the Carribean as a symbol of welcome.

Pineapples were scarce in Europe, and that lack of supply made them coveted – as a result they were startlingly expensive, and were actually available to rent in 17th-century England. They later became more available due to increased trade and the building of glasshouses, but the symbolism continued, and carved stone or wooden pineapples became common decor items.

Another fake food trend came in 20th-century Japan. A combination of new foods that Japanese diners weren’t familiar with, and foreign soldiers based in the country after WWII, made communicating exactly what dish you were talking about increasingly important. Enter shokuhin sanpuru, ‘food samples’, initially made of wax, which diners could simply point at. Now usually made of PVC, they’re a Japanese industry worth almost £100 million. Most of the often alarmingly realistic models are still made by hand, and almost all cost more than the food they represent.

Cakes that look like anything from a spaceship to a watermelon are common sights at special occasions. And avant-garde chefs like anything that will make a diner think – hence British chef Heston Blumenthal’s creations such as a ‘meat fruit’ that looks like a tangerine, but is actually made of mandarin jelly and chicken liver mousse. It all makes Chen Yuping’s doughy fruit and vegetables seem like a pretty vanilla dining option.