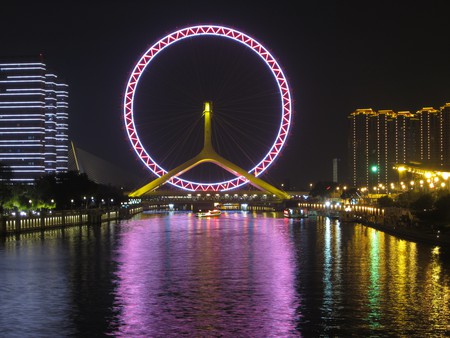 Tianjin is an international metropolis, but there are vast historical sites to roam, paths to navigate, and snacks to savor, with many for free or little expense. A short-term travel budget of a few hundred RMB is definitely plausible. Just be sure to mind what you pack as Tianjin is a northern coastal city – with occasional chilly nights and humid days – and worry less about your expenses.

Expansive but not expensive

More than likely you’ll be entering Tianjin off the 30-minute speed train commute from Beijing, or from another town. Once you arrive, a taxi from the train station to downtown should only take about 15-25 minutes, costing around 20 RMB (US$3). And if coming from Tianjin International Airport, expect to pay 60-70RMB (US$9-10) with a 25-35 minute commute to downtown. If your Mandarin is exceptional, use the DiDi app to hail a taxi to pick you up. But if not, you might have to just go cue up and wait for a cab.

Rush hour is 7-10am and 5-8pm, so with the subway, you will have no trouble in finding quick and inexpensive transportation to every corner of the city. Cab drivers are all around, and you’re not likely to be ripped off by paying extra (just make sure the taxi cab meter is on, as you should anywhere). The cheapest and quickest way to get around town is by three-wheeled tuk tuk. If at the end of the day you’re looking for a romantic excursion to drift down the river, Haihe Riverboat at 100RMB (US$15) per ticket.

Chowing on the cheap

Kicking off the day for around 20RMB (US$3), a typical local breakfast includes porridge, soybean milk, deep-fried bun, and a Chinese pancake (jianbing). Tianjin is notorious for its traditional handcrafted snacks of local origins, like the ear-hole fried rice cake, honey soft cake, and fried dough twists. The Nanshi Food Mall is full of stalls that serve these snacks, but some say it’s a tourist trap. You might be better off finding local vendors elsewhere downtown.

Binge on a budget when you’re on Ancient Culture Street. Although a staple tourist destination, you can sample bites from a seemingly never-ending plethora of kiosks, each selling skewers of various grilled veggies, seafood, meat cuts, or even quail eggs and other exotic foods. And if you’re also into traditional arts and crafts, this street is perfect.

Tianjin is abundant with international five-star hotels, and like the hotel skyscrapers, the prices are high. A common cheaper alternative is to instead stay in a locally branded hotel. When checking in, make sure to ask if they are familiar with registering foreign guests (non-Chinese nationals).

If you’re looking for a unique stay, try Tianjin’s best-rated hostel, the Cloudy Bay Hostel, a cozy blue and white-painted villa that was originally built in the 1930s during the European concession era. Located by a large port, this unique hostel offers a full 360-degree view from its rooftop, while the exterior hearkens the city’s early 1900s period as a housing quarter for foreign aristocrats.

If you’re seeking novel photo and selfie opportunities, Tianjin is full of backdrops. First, The Porcelain House (aka The Ceramic House) is a one-of-a-kind home, with an exterior that is decked out in ceramics. The cost of entry is 50 RMB (US$7), though you can capture most of the house’s essence from the outside, without having to go in. Marvel at its tackiness, or brilliance, however you see it. 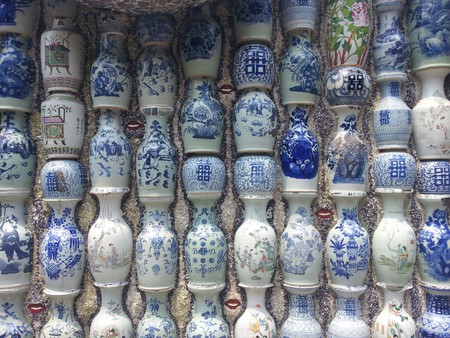 Next, the free-to-enter Quanyechang Shopping Mall will take you back in time to an indoor shopping mall experience, with antiques and a vintage interior. Locals claim it’s one of the places in Tianjin that, “If you haven’t been to Quanyechang, you haven’t truly been inside Tianjin.”

The Tianjin Drum Tower is an historic Chinese structure – it’s one of those sites you must see at least once. And it costs nothing. Nearby are streets filled with cheap take-home local souvenirs. Inside the tower are classic photographs of Tianjin and the area that surrounds the Drum Tower.

Yinhe Square is known for its “truly local cultural atmosphere.” In the evenings, this is a bustling area where you can enjoy a dinner or just the “people-watching” of skaters and dancing groups. Formerly a concrete platform, it’s now revamped as an outdoor garden-like shopping area.

The end of a day in Tianjin wouldn’t be complete with partaking in the famous Eye of Tianjin Ferris wheel. Comparable to the London Eye, this low-cost ride usually has a short wait. Just make sure to go on a clear day to get the full benefit; the ticket costs 80RMB (US$12).