A Brief History of the Yellow Crane Tower 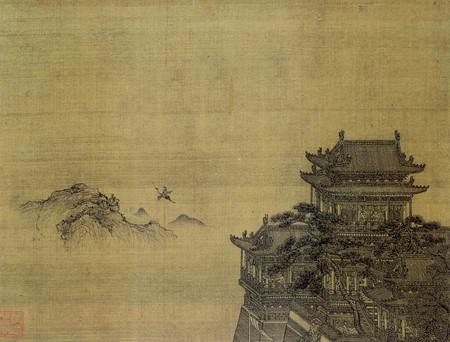 The Yellow Crane Tower is one of the Four Great Towers of China. Sitting atop Snake Hill, on the banks of the Yangtze River, this iconic building is one of the most celebrated landmarks in Wuhan. While tourists flock to see the upturned turrets which define this yellow-tiled pagoda, the tower also has a long and colourful history.

There are a number of legends which tell the tale of how the Yellow Crane Tower came to be. The most widely told is the story of a wine merchant named Xin. It is believed that one day, an immortal being called Zi’an disguised himself as a poor man and wandered into Xin’s wine store. Right away Xin, showing no judgement or prejudice, offered the man some free wine. 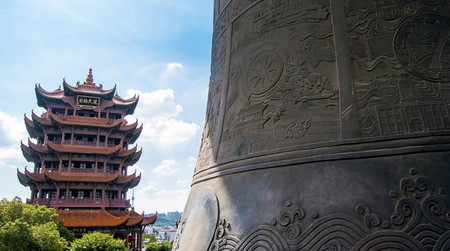 The poor man came back day after day for several years and Xin always greeted him with the same warmth. One day, as the poor man left the store, he took some orange peel and drew a picture of a crane upon the wall. He told Xin that if he clapped his hands, the crane would come down from the wall and dance for him. Miraculously, what the poor man said was true and the dancing crane brought so much business to Xin that he soon became a very wealthy man. Ten years later, Zi’an came back to Xin’s store, pulled out a flute and summoned the crane from the wall. The crane flew down, allowed Zi’an to mount it and together they flew off into the distance. To commemorate Zi’an and the crane, Xin built the Yellow Crane Tower. 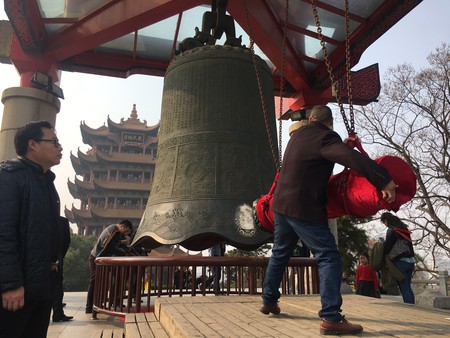 If you’re not quite sure about this version of events, there are some more believable accounts out there. Historical evidence suggests that in actual fact, The Yellow Crane Tower has existed in various forms since AD 223 during the Three Kingdoms Period. The original building is believed to have been built as an enemy watch tower by the Great Emperor of Wu, Sun Quan. During the Ming and Qing dynasties alone, the tower was destroyed and rebuilt at least seven times. In 1884 it was completely destroyed in a fire and was not rebuilt until the modern day tower was erected in the 1980s. 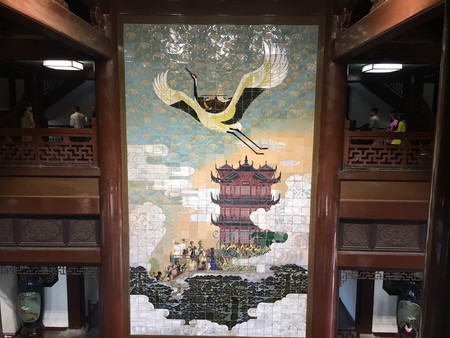 Today the tower is most famous for inspiring the work of Tang dynasty poet, Cui Hao. The eighth century poem entitled The Yellow Crane Tower is often labelled as one of the greatest works in the Chinese poetic canon. Many other poets have mused over the beauty of the building, including Li Bai Shi, who wrote the poem, Seeing off Meng Haoran for Guangling at the Yellow Crane Tower. Today, the tower stands proudly in the centre of Wuhan. The inner wall of the building is now home to an exquisite mosaic artwork which stretches out over multiple storeys and tells the story of the Yellow Crane Tower.