A Brief History of the Ruins of St. Paul's 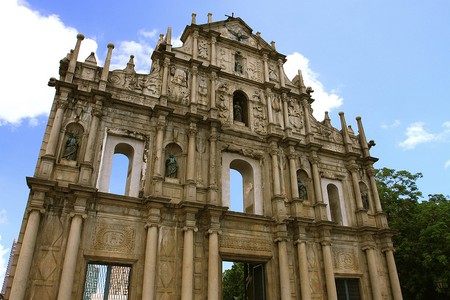 Arguably Macau’s most famous landmark, the Ruins of St. Paul’s continue to captivate visitors centuries after it was originally constructed. Today, most tourists who visit the ruins probably only see the remains of a beautiful old church, but there’s more to its story. In fact, the ruins serve as a key reminder of Macau’s unique roots.

Constructed from 1602 to 1640 by Jesuit priests who travelled to the Far East to spread Catholicism, the site originally included St. Paul’s College and the Church of St. Paul, also known as “Mater Dei”, a Portuguese church dedicated to Saint Paul the Apostle.

Located at the top of a hill, the structure was the largest church in Asia at the time and was acclaimed as “The Vatican of the Far East”. Its existence was meant to express the triumph of the Roman Catholic Church through the ornate grandeur of the buildings.

The original structure was made of wood, which burned down in a fire during a typhoon in 1835, leaving only the beautiful granite façade and a grand staircase of 68 stone steps leading up to it. 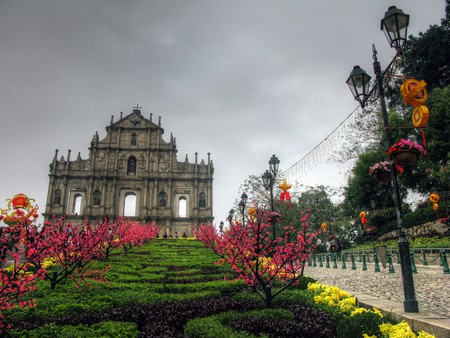 Most historians believe the church was designed by an Italian Jesuit named Carlo Spinola. The church’s design is one of a kind – like Macau itself, it’s a mix of East and West. Chinese and Japanese artisans and craftsmen were involved in the decoration of the façade, which was built by Japanese Christians who were fleeing persecution at home.

At the top of the façade, a dove is surrounded by stone carvings of the sun, moon and stars – a symbol of the Holy Spirit. European and Asian influences are reflected in the ruins through biblical images, Chinese characters, six Chinese lions, mythological representations, Japanese chrysanthemums, a Portuguese ship and bronze statues. Beneath the dove is a statue of Jesus, and around it are stone carvings of the implements of the crucifixion. Today, the façade of the Ruins of St. Paul’s functions symbolically as an altar to the city. 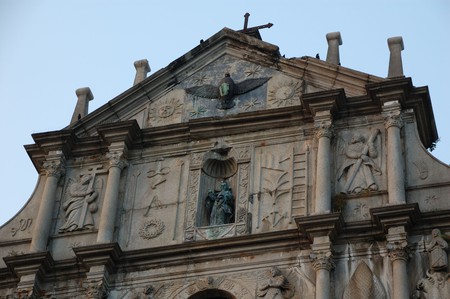 One lesser known fact is that there were once several tunnels in Macau, including one that was believed to connect the inner harbour in Macau to St Paul’s College, close to where the church was situated.

A priest named Sarmento wrote that he observed the tunnel in 1941, and that it was used by Jesuit priests to escape from attacks. Others believe it hid treasures. The tunnel may be sealed now, but its presence and that of the craftsmen who built the church can still be felt at the ruins of St Paul’s.

The ruins were restored by the Macanese government into a museum, and today the façade is buttressed with concrete and steel in a way that preserves the aesthetic integrity of the façade.

A steel stairway allows tourists to climb up to the top of the façade from the rear to get a closer look at the stone carvings and to enjoy a panoramic view of the city below. It’s tradition to throw coins into the top window of the ruins from the stairs, for luck. In 2005, the ruins were officially listed as part of the Historic Centre of Macau, a UNESCO World Heritage Site. 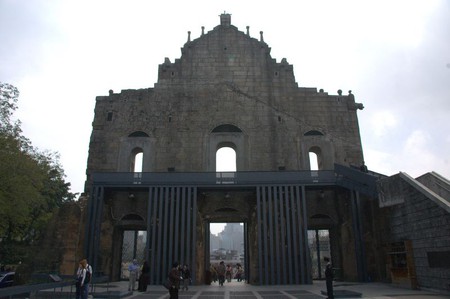 The Museum of Sacred Art and Crypt was built at the bottom of the ruins in 1996 and houses many religious artefacts including Sino-Portuguese crucifixes, as well as a 17th-century painting of St. Michael the Archangel – the only surviving work from the original college. Admission to the museum is free every day between the hours of 9am and 6pm.