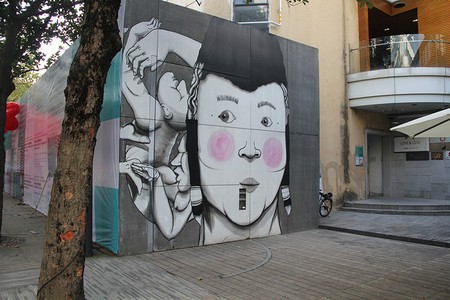 Once a factory compound, the OCT-LOFT complex in the leafy, well heeled residential district Overseas Chinese Town serves as a focal point for the megacity’s burgeoning art and design scene. Its history is quite brief, after all, Shenzhen itself only came into its own two generations ago, when China’s leader Deng Xiaoping opted to transform what was a market town of 300,000 into a Special Economic Zone.

OCT-LOFT’s story begins as place of electronics manufacturing. Before it became Shenzen’s creative heart, the compound was owned by a Chinese TV maker. This followed reforms that enabled businesses to practice market capitalism and enjoy minimal intervention from Beijing.

In the ensuing years, Shenzhen developed at a jaw dropping pace. The megacity became one of the largest ports in the world, and the Pearl River Delta became the biggest continuously urbanized area in the world. As fortunes improved, the GDP averaging an annual growth rate of 27 per cent, an art ecosystem began to develop alongside a shift in direction for the metropolis from workshop of the world to innovation hub. 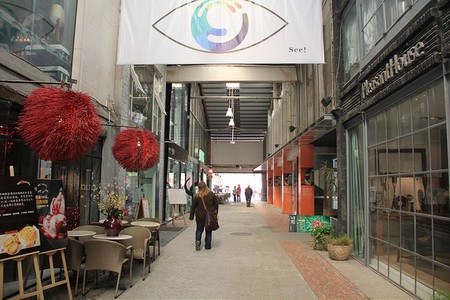 Ever ambitious Shenzhen set its sights on becoming the China’s creative capital buoyed by a local DIY, artsy culture and “anything goes” attitude (accrued in part owing to its distance from China’s prying eyes). OCT Loft embodies this spirit, having been at the frontline of Shenzhen’s nascent art scene since it opened in 2005.

Renovated from the abandoned factory buildings by Shenzhen architecture firm Urbanus, the complex houses contemporary art galleries, boho coffeeshops and a popular bookstore specializing in design. With low level architecture and garden beds among street sculptures, it offers an alternative experience of a slice of Shenzhen life.

Though its set up was modeled in part on the Vancouver loft zone, its influences stretch back to the Soho art lofts in 70s New York. It also recalls Bejing’s edgy 798 district and Shanghai’s m50.

“We were very excited when our company was commissioned to undertake the renovation project,” said Meng Yan of Urbanus in an interview after OCT-Loft’s opening. “But when we first saw the factory buildings, we were disappointed. They had no big chimneys or huge spaces, just simple roofs.”

With a total of investment of 30 million yuan (US$3.9 million) and two years of renovations, the park originally covered 55, 365 square meters and initially welcomed 20 companies. In 2005, the site enjoyed its first Architectural Biennale, and has since drawn interest worldwide for its arts and design events. 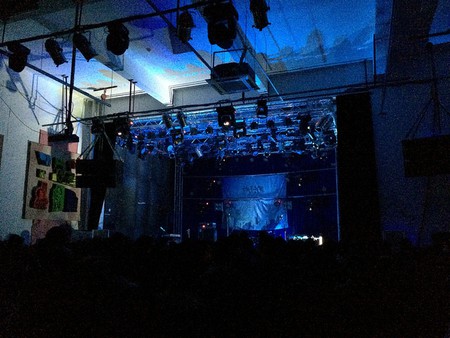 2008 saw the opening of Oct Art and Design Gallery, a daring space showcasing postmodern works which has played an integral role in Shenzhen’s increasing prominence in the world of design. This was also the year Shenzhen was dubbed UNESCO City of Design.

Adjacent to the complex is a gallery opened in homage to painter He Xiangnang, who along with her husband Liao Zhongkai, was a founder member of Kuomintang and devoted follower of modern China’s first president Sun Yat-Sen. A politician alongside a patron of the arts, He Xiangnang’s son Liao Zhongkai became the driving force behind the development of the district.

Today, the cultural park stretches over a space of 1500000 square meters, and is hub for fine art, architecture, and even boasts its own Jazz festival.