The hobby of keeping birds is a famous tradition in Beijing. It all started during the Qing dynasty, with the Manchu noblemen and eunuchs who began keeping pet birds as a hobby to pass the time. Even today, it is a common sight to see men strolling in the park stringing along several bird cages in tow. We delve into the curious history of birds in Beijing.

A history of bird-keeping in Beijing

If you are a morning person who live in Beijing, and happen to like exercising in parks early in the day, you might well run into men holding bird cages. While it is mostly older Beijingers who still keep and train pet birds today, there was once a time when the whole city was crazy about the hobby.

Bird-keeping was initiated by the elite Manchu banner men – the nobles of the Qing dynasty – and the eunuchs in the royal court. With sufficient monthly subsidies and a hereditary system that guaranteed the nobles the succession of their father’s title and land, the banner men had no need to work, and keeping birds was a way of passing the time. Thus the Chinese phrase describing the hobby, ti long jia niao (ti long means “carrying the bird cages”, and “jia niao” means “keeping birds on perches”), is often used to criticize idle men.

The hobby was later passed down to the civilians as entertainment in the midst of their exhausting work. In its heyday, the Beijing streets were swarming with men carrying pet birds, no matter what age or social rank they were.

What to look for in a bird

There were mainly two criteria for good pet birds: one was the beautiful appearance, such as the popular red and green Eclectus Parrot, the canary, and the Zebra Finch bird (known as Pearl Bird in Chinese); the other was the pleasing birdsong. The Huamei bird sings beautifully and is known for its light-colored hair above its eyes that look like eyebrows, and the lark bird who, apart from its own melodious notes, is said to be able to imitate 13 kinds of birds, as well as other animals like cats. There is much to learn about the birds’ voices: you can even tell the birds’ characters from the pattern of their chirps. 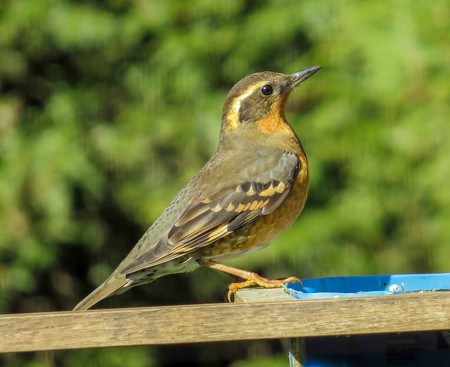 Some bird-keepers are obsessed with bringing out the potential of their birds by training them and they do this by taking them on a walk – in Beijing dialect it’s called ‘ya’. It is believed that by walking the birds, they can get used to living in cages around people, and hopefully they will be willing to tweet. It takes at least a year to ‘ya’ a bird.

In the case of lark birds and Huamei birds, if their owners intend to let them imitate other birds, they need to arrange a meeting with other owners’ pet birds, by hanging the cages on trees next to each other and letting the birds have a chirping competition. The bird owner will decide whose voice his bird is going to copy, so he will have to get familiar with his friends’ birds too. Chinese essayist Wang Zengqi once wrote an anecdote of a Huamei bird-keeper he met: in order to let the Huamei imitate a cuckoo, this bird-owner actually chased after a cuckoo for five mornings (cuckoos are rare in Beijing) to record its chirps.

While there are differences in the appearance and voice of birds, the price of birds varies too, from less than 100 to thousands of yuan. While there used to be bird markets everywhere in Beijing, including the pop-up bird markets in Temple Fairs, in which all kinds of birds, bird food, cages and accessories could be purchased, many smaller markets have disappeared following the gentrification of the city. It is believed that bird-keeping reflects a leisurely and carefree spirit that runs in Beijingers’ blood, but with the increasing pressure of modern society, the hobby is inevitably disappearing, along with the spirit.