A 5 Minute History of the 10 Concessions of Tianjin 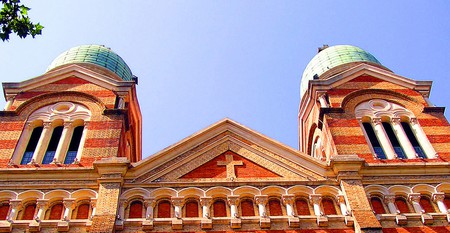 Tianjin was once an oasis for foreign powers in China. 10 nations (nine if you count Austria-Hungary as one) actually lived harmoniously (most of the time) and even defended one another against occasional Chinese authority and social uprisings. Their influence is prevalent throughout Tianjin, as you can see on Italian Style Street, the Five Great Avenues, and St. Joseph’s Church, but there is much more to know and venture. Tianjin was China’s international hub of the Roaring Twenties and Thirties before being dismantled by WW2.

Among the first foreign concessions in Tianjin, this enormous, (the largest pre-Japanese occupation) colonial area was founded in 1860. Stretching from the west bank of the Hehai River and beyond, The British Concession since expanded three times and adjoined the French Concession. The Chinese government officially regained the British Concession after defeating the Japanese in World War 2 in 1945, though British buildings still stand strong in the Five Great Avenues.

A good day to bask in the sun #fivegreatavenues

Established in 1860 proceeding the British, and adjoining the British Concession. Beginning as more of a religious site than a commercial one, only a few buildings were erected aside the French Consulate and most activities were held in Wanghailou Catholic Church. This concession returned to China at the same year as the British in 1945.

The American Concession was extremely limited. Founded during the Civil War in 1862, America was too preoccupied and abandoned its concession in Tianjin. Later the U.S would merge with the British concession as one unilateral power, though it kept some of its own rights.

To this day, the Italian concession boasts some of the most impressive architecture in Tianjin. A significant landmark is the old Military Barracks. Today this former Italian army base serves as the headquarters of the police department. But an undeniable fixture in today’s Tianjin is Italian Style Town, full of boutique shops and restaurants, and a slice of Italy that is alive and vibrant.

One of the shortest reigns of colonialism in Tianjin, Germany’s occupation came to a halt following World War 1. Lasting just 22 years from 1895 to 1917, the Chinese government completely retook the German concession area by 1921, ironically along with the American Army. The U.S reclaimed the German military barracks from 1917 until 1938’s Japanese invasion.

The Belgian concession was the most minimally spread of all 10 nations. Spanning from 1902-1931, Belgium saw Tianjin as an investment opportunity rather than a property preposition. With very nominal construction, Belgian authorities focused their attention on building an electrical grid and trolley system for Tianjin, beating out Shanghai as the first city with both, in 1906.

The last concession of Tianjin belonged to Japan. After the end of the first Sino-Japanese War in 1898, Japan established its presence and even bolstered it after the Boxer Rebellion (Chinese uprisings) of 1902. Henry Puyi, the last emperor of China who was exiled to Tianjin, was also the first emperor in history to be divorced by an imperial concubine, who was Japanese. Japan fully occupied Tianjin and the other concessions by the second Sino-Japanese War in 1937 until their defeat in WW2 in 1945.

The shortest colonial reign that lasted only 16 years from 1901-1917, the former Austro-Hungarian concession was expanded after their participation in the Eight Nation Alliance, a formal stance against the Qing Dynasty for reparations of an uprising that left multiple French colonists dead. Along with the expulsion of Germany during WW1, Austria first withdrew from Tianjin in 1919 and Hungary followed shortly after in 1920.

Set up in 1900 as a result of the Eight Nation Alliance, and because of Russia’s control over the Tianjin Railway Station, the Russian concession was divided into two areas East and West of the railway station. However, Russia’s overall economic impact was the least out of all the occupying nations. After the 1917 Russian Revolution, Soviet Russia recalled its presence in China and the area was officially taken back by China in 1924.