Mesmerizing Chinese Dances You Should Know 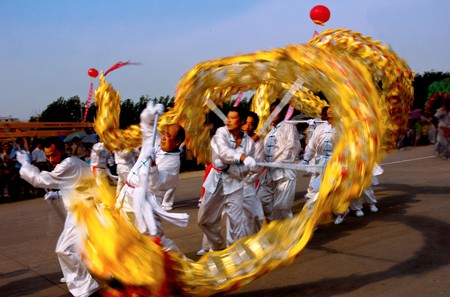 Dance in China can be traced back to the 4,000 BC. Pottery shards from the time show people moving around with weapons in what appear to be choreographed dance routines, most likely for some sort of hunting rituals. Since then, countless dance traditions have developed across China. On a very basic level, these can be divided into: traditional Chinese dance, ethnic minority folk dances, and modern dance.

The dragon dance, 舞龙 (wǔlóng), is probably the most well-known of all the Chinese dances and is recreated all over the world for Chinese Spring Festival celebrations. It is one of the older of the Chinese dances and can be traced back to the Han Dynasty (206 BC-220 AD). Unlike Western culture, in China dragons are actually auspicious, and it is believed that the longer the dragon, the luckier it is. Because of this, the dragons used in Dragon Dances can stretch to be 100 meters long. They are normally constructed with multiple “joints” held up by the dancers who twist and prance their way down a street.

Fans are certainly not unique to China, but they play an important role in Chinese traditional dance. Fans have a long history in China, but the first recorded fan dance, or 扇子舞 (shànziwǔ), was during the Han Dynasty. As an extension of the hand, they are used to accentuate a dancer’s movements, and symbolize grace and beauty. Similar to the Sword Dance, fans have a history both in military and civilian life. Civilian fan dances are for entertainment, whereas the military traditionally used them in training exercises.

Sword dance, known as 剑舞 (jiànwǔ) in Chinese, has roots in many cultures throughout world history. In China, the dance initially developed as a training exercise for soldiers before later turning into an acrobatic dance. It is one of the four classical dances employed in traditional Chinese opera as well as a dance often performed in Tai Chi. Many times a tassel will be attached to the end of the sword, the swaying of which adds a mesmerizing quality to the sword.

孔雀舞 (kǒngquèwǔ), or the Peacock Dance in English, comes from the Dai ethnic group native to southern Yunnan (a province in China bordering Vietnam, Laos and Burma). Peacocks feature heavily in Southeast Asian symbolism, and are often connoted with heaven, peace, elegance and good fortune. Performers of the Peacock Dance recreate the movements of the bird. Dancers will normally begin with peacock waking, before proceeding to look for food, bathe in a river, and finally: fly.

敦煌舞 (dūnhuángwǔ) is the Dunhuang Dance in English and comes from Dunhuang: an ancient city in Gansu, China. Dunhuang is famous for being the Chinese gateway to the Silk Road, which was an ancient network of trading routes that connected eastern Asia to Europe. Buddhism was one of the cultural traditions that was transmitted through the Silk Road (Dunhuang is well-known for its Mogao Caves, where archaeologists found thousands of murals and sculptures depicting Buddha), and Buddhist motifs feature heavily in the Dunhuang Dance.

Uyghurs are an ethnic minority group from Xinjiang province in western China. The province is so far west that many Uyghurs actually look more Middle Eastern than Chinese, and many parts of their culture are heavily influenced by the Middle East (including religion, food, dress, music, and dance). Dancing in Xinjiang is a joyous occasion and occupies an important role at festivities. Although there are many different styles of Uyghur dance, the most famous of them is the Muqam Dance, 木卡姆 (mùkǎmǔ). Uyghur dancing is mostly characterized by sharp wrist and head movements while retaining an erect torso, and normally includes a lot of foot stamping in time with heavy drums.

The Red Detachment of Women – Modern

The Cultural Revolution was a period in China lasting from 1966-76 which sought to promote Communist ideology in its citizens and introduced many new practices and rituals into society. Among these were eight revolutionary operas which glorified the Party and its ideologies. The Red Detachment of Women was one of these and is about a poor woman’s liberation from her despotic landlord (this fight against landlords was a recurring theme during Mao Zedong’s period of rule). Through its motifs and the fact that it’s a modern dance (a ballet), we can see it to be a deliberate counter against traditional values and dance in China.

Exercise as a dance can be traced back to ancient China, although what we now know as Chinese “square dancing” (广场舞, or guǎngchǎngwǔ) in the West is relatively new. Square dancing refers to groups of people (usually older ladies) who congregate in public squares and dance together, often in block formation. It developed in the modern sense in the 1990s amongst recently retired women who suddenly found themselves with a lot of extra time. The social and exercise aspect, as well as a low cost to participate have caused the activity to surge in popularity since then.