The 8 Most Beautiful Mountains in Sichuan 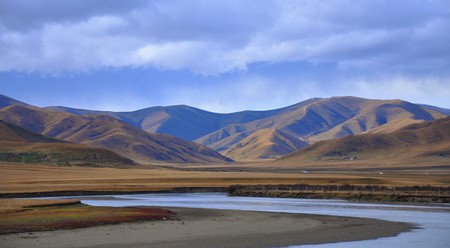 Sichuan is a province of sharp mountains and peaceful valleys carved by glaciers centuries ago. Abutting the Himalayan plateau, there are thousand of beautiful peaks and breathtaking gorges that will wow even the most traveled of hikers. The Tibetan Autonomous Region (part of western Sichuan) also provides an interesting amalgam of Sichuanese and Tibetan culture that is far from the Han culture back East. While the mountains around Chengdu and towards the eastern area are a bit softer, the mountains to the west and north are generally at high altitude and only experienced mountaineers should summit them. However, hikes through the valleys and gorges can also be quite strenuous enough, and the reward of getting away from the cities and into nature is immeasurable.

A mere 45-minute train ride from the center of Chengdu will drop you near the foot of the verdant Mount Qingcheng, known as one of the top four Taoism Mountains in China. Its fame draws not only from the beauty of its 36 peaks, but also from Taoist mythology. The founder of Taoism, Zhao Daoling, thought the serene natural scenery of Mount Qingcheng was the perfect spot for the development and prosperity of Taoism. During the Jin and Tang dynasties, many temples were built on the mountain, and it was an important intellectual and spiritual center of Taoism in the 17th century. Today, the mountain is a UNESCO World Heritage site, and you can see more than a dozen Taoist temples built into the front mountain (the back mountain is better for natural scenery). 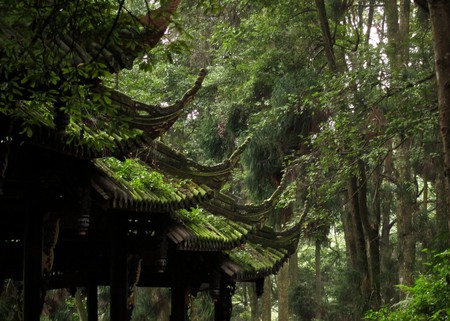 Set just 30 kilometers away from Mount Qingcheng (and about 70km from Chengdu) is beautiful Mount Heming. The mountain is widely known as the birthplace of Taoism after Zhao Daoling founded the “Way of the Celestial Masters” sect of Taoism here in 142 AD, when apparently Laozi descended for him and ordered him to establish a new covenant between the true gods of Taoism and the people. At its height, the movement controlled a theocratic state in Sichuan. The mountain itself covers more than 120 kilometers and is so named because it looks like a crane that is about to take flight. In addition to the beautiful natural scenery, the mountain is covered in a variety of temples and halls tucked into crevasses and onto overlooks.

The beautiful Emei Mountain (Éméi shān, 峨眉山) is one of the Four Sacred Buddhist Mountains of China, featuring incredible natural scenery and breathtaking vistas. It also houses eight fantastic temples that still hold important Buddhist artifacts. One of the most magnificent of is the Wannian Temple (Wàn nián sì, 万年寺), which translates to the Ten Thousand Year Temple. Built during the Jin Dynasty (265-420 AD), it is nationally renowned for housing an amazing Buddha statue, built in the Song Dynasty and still the largest in China, weighing more than 62 tons and standing eight meters tall. Another famous (and lovely) temple is the Baoguo Temple, which offers breathtaking waterfall views and is usually full of Buddhist pilgrims. 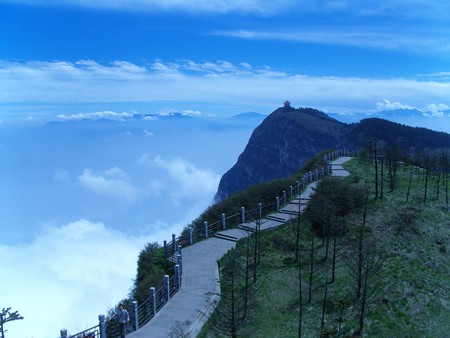 Set close to the famous Jiuzhaigou National Reserve on the northern edge of Sichuan province, the mountains around Songpan are a worthwhile trek off the beaten tourist path. Set about a two day trek from the town center, the trail to Ice Mountain is full of sharp rises and falls, punctuated by traditional Tibetan villages along the way. The mountain itself is a steep climb up towards a glacier, the quiet valley route of which is decorated by Tibetan prayer flags. Many horseback tours leave from Songpan. 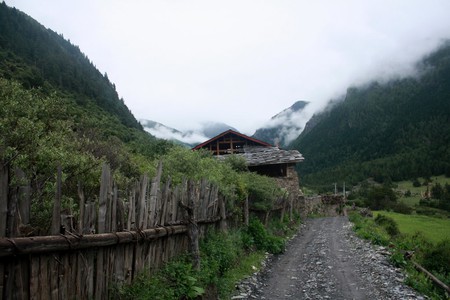 This cluster of four stately peaks is the crowning glory of the Qiong Lai Mountain range, located in the Tibetan Autonomous Region of Sichuan. The highest peak is also called the Queen of Sichuan, towering at 6,250 meters (20,505 ft.), surrounded by her three little sisters, all hovering around 5,500 meters (18,000 ft.) high. The peaks are generally covered in snow, but the hikes through the valley are breathtaking. One could also set up a horseback riding trek through the area as well. 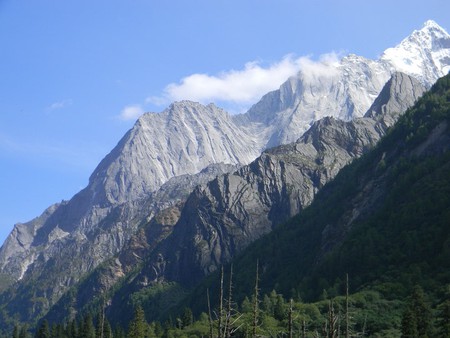 Also located in the Four Sisters National Park (where the famous Four Sisters Mountains are), the Celestial Peak juts sharply into the sky and casts a stunning profile. Among serious climbers, it’s considered one of the most technically tricky climbs in China. Amongst the more laid-back of hikers, it is stunning to come across its visage after a ranging walk past stark cliffs and lush valleys. 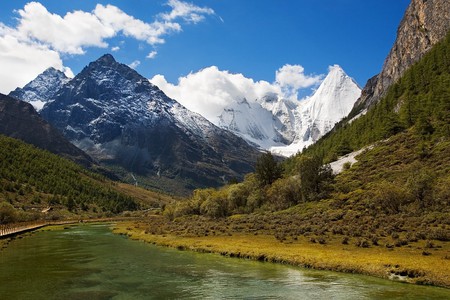 Considered the most sacred place in Western China, these three mountains cluster together in the Yading National Reserve. Each peak is thought to have its own personality. Xiannairi Mountain (6,032 m./19,790 ft. high) is said to resemble a grand Buddha statue seated in the Lotus position. Yangmaiyong Mountain (5,958 m./19,547 ft. high) is said to look like a seated young lady, and Xiannuoduoji Mountain (5,958 m./19,547 ft. high) is purported to look like a young boy. The national reserve itself is also worth spending a few days wandering through, as there are many natural wonders (and even more mountains) to discover. 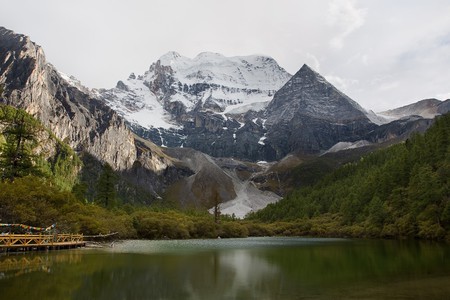 Set in the Daxue Mountain range, Mount Gongga is the highest peak in Sichuan Province, towering 7,556 meters (24,790 ft.) above sea level and dominating a beautiful landscape of gorges and valleys. Know by locals at “The King of the Sichuan Mountains,” this area is popular for both serious trekkers and Buddhist pilgrims. Summiting the snow-capped mountain is only for the most experienced of mountaineers, but the trails through the mountain range wind around its western face, which follows the sacred pilgrimage (kora) that many Tibetans undertake each year. Check out the Zhilam Hostel as a jumping off point. 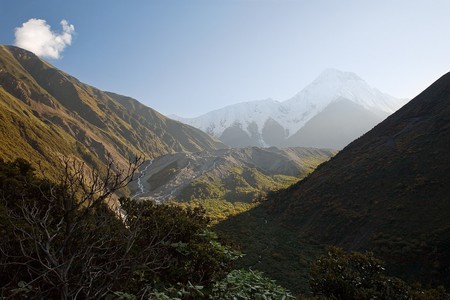 Surrounded by old-growth forests, stunning grasslands, and quiet Tibetan villages, the road to Genie mountain is nearly as interesting as the mountain itself. The third highest peak after Gongga Mountain and Yaomeifeng, Genie Mountain is the thirteenth mountain amongst the 24 considered holy in Tibetan Buddhism. Again, reaching the summit is for experienced mountaineers only, but the surrounding area is so stunning, you’ll hardly notice you didn’t reach lofty heights. This trekking route is still very much off the main tourist route, so the surrounding towns are sleepy and still retain a lot of their character. You’re also likely to see some interesting wildlife. The main jump off points for this hike (or horse trek) is from Zhangna township or Lamaya township.