8 Amazing Experiences You Can Only Have in China 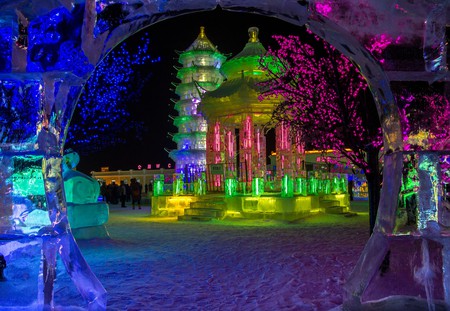 Sometimes the best experiences in China are the small ones—the ones you can’t plan, such as stumbling upon a lively game of mahjong in the park, eating a delicious lamb kebab at a roadside stand, or getting your picture taken covertly on the subway. But for experiences you can plan, here are the most sure-fire bets for an unforgettable China trip.

Find your match at the Shanghai Marriage Market

Arranged marriage may have all but died out in China, but you can still experience one aspect of it every weekend from 12–5 pm at the People’s Square Marriage Market. There, parents line up with their children’s marriage résumés attached to umbrellas (big ticket items include salary and property ownership), peruse the résumés of others, and mingle about to find a suitable child-in-law. As China races toward modernity, traditions such as this are harder and harder to find, so experience this remarkable peek into the past while you still can.

Sing KTV until the sun comes up

KTV is much more than the karaoke you know from back home. And sure, Japan and Korea have it too, but no one does KTV quite like China. Far from just singing rooms, KTV is a grand entertainment hub full of drunken patrons playing dice, buying multi-colored shots, engaging with “hostesses,” and, of course, singing. The individual rooms are often lavishly decorated, and some even cost more than a night out at a posh club. The major KTV chains offer a wide selection of English-language songs, so don’t worry about not being able to keep up; although, it’s also fun to butcher Chinese tunes while enjoying the cheesy music videos straight out of the ’90s.

Camp on the Great Wall

You may think you know the Great Wall of China, but you’ve never truly seen it until you’ve camped it. Several travel agencies within China offer camping trips on the wall, giving you an experience few get or take advantage of. For example, you can see both the sunrise and the sunset over the surrounding mountains, and you can also enjoy a cold Tsingtao or Yanjing beer when it gets too hot. Either way, you’ll feel like you’ve been transported back in time to before the wall had tourists.

Slide down an ice castle in Harbin

The Harbin Ice and Snow Festival, which takes place from late December to late February each year, takes the phrase “winter wonderland” to a whole new level. Complete with massive ice slides, sculptures, and buildings, the festival turns even the most hardened adult into a kid again. As long as you’re dressed for the sub-zero temperatures, you can stay out all day, sliding down ice castles and racing ice bikes. The festival is more than just fun, though. It’s also picturesque. During the day, the sun dazzles against the world of white, and at night, the ice is lit from within by multi-colored bulbs.

Hear the sand echo in Dunhuang

Located in the vast Gobi Desert, just outside of the city of Dunhuang, is a breathtaking place known as the Echoing-Sand Mountain. More dunes than mountain, Mingshashan, as it is known in Chinese, was named for the sound that the wind makes as it whips against the desert sands. Experience the sights and sounds via camel, quad bike, electric car or foot.

In few other places in the world can you see the human-engineered spectacle of terraced rice fields, and nowhere else can you walk among the budding rice plants. The Longji Rice Terraces are iconic China at its finest, and you would be remiss if you passed them up. The terraces have four unique looks, corresponding with each season, and though beautiful year-round, the fields can only be walked on in the summer and fall when they aren’t flooded or frosty. Do like the Chinese tourists do: dress in your best outfit, step onto the fields, and take pictures that will stun your friends and family back home.

Hold on for dear life on Mt. Hua

You may have seen pictures of Huashan’s death-defying Plank Walk online, but experiencing the pit-of-your-stomach fear that the walk induces is quite another thing entirely. Not for the faint of heart, the Plank Walk puts climbers on the edge of the mountain, giving them the best views of the mountain and a great story to take back home. Be careful though, the hike up Huashan has been named one of the most dangerous treks in the world. Of course, you can always take the cable car if you’re not willing to chance it.

Stay in a traditional tulou in Fujian

Tulou, which translates to “earthen buildings,” are homes depicting a distinctive architectural style found only in Fujian province’s Yongding District. These doughnut-shaped houses are native to the Fujianese Hakka people, some of whom still reside there today. Each home consists of a circular outer ring surrounding an open-air central shrine. There are over 20,000 tulou remaining in southern Fujian, a small group of which have been designated a UNESCO World Heritage Site. While some tulou can only be passed through, others still house Hakka residents, and some might even welcome you for the night.

Hundreds of people with the same family name are living in this heritage Tulou building in Fujian, China. And the coolest thing is they even have a temple in the middle for preying. – – – #tulou #fujian #china #instatravel #village #heritage #buildings #building #architecture #unesco #worldheritage #culture #country #countryliving #countrylife #instagood #instadaily #temple #villagepeople #villagelife