7 Interesting Facts About the Temple of Heaven 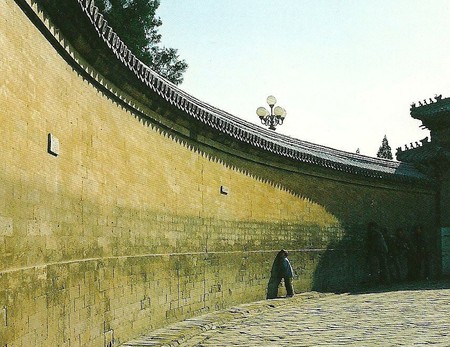 You have probably heard of Beijing’s famous central axis, where the most significant architecture of the well-established imperial capital stand: (from south to north) Tiananmen, the Forbidden City, Jingshan Park, the Drum Tower and the Bell Tower. But the highest-level worshipping venue is somewhat east to the central axis. That is because according to I Ching, southeast to the imperial palace is the direction where solar power is supreme – that’s why the Temple of Heaven was built southeast to the Forbidden City. 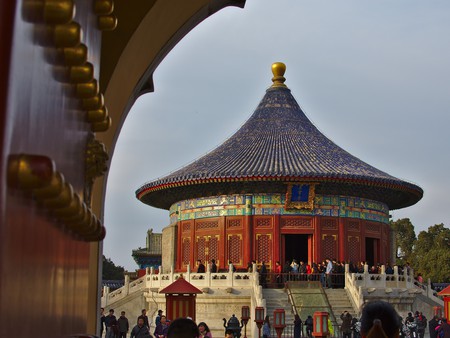 The visual illusion of the Hall of Prayer for Good Harvests

If you search for photos of the Temple of Heaven, most of them will show the Hall of Prayer for Good Harvests. It’s hard to gain perspective of the hall before you walk around it yourself: except for the plaque, the hall looks almost the same in every direction, including its doors. This is due to the Jiajing Emperor of Ming Dynasty, who succeeded his brother Mingwu Emperor, who didn’t have a son. In order to demonstrate that his succession was by the will of heaven, the Jiajing Emperor ordered architects to build the the hall round, instead of square, as per the ancient yin and yang philosophy that the heaven is round and the ground is square. 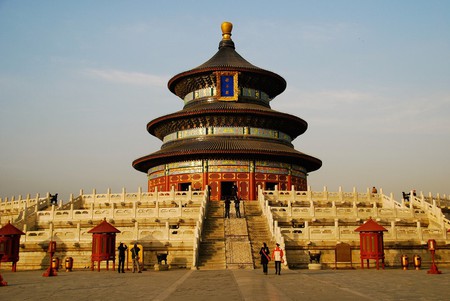 The Hall of Prayer for Good Harvests | © faungg's photos / Flickr

The pillars have their stories

The Temple of Heaven is built for prayers to reach Heaven, and its architecture has fascinating details. A famous detail is the pillars in the Hall of Prayer for Good Harvests: the four dragon well pillars on the inner circle embody the four seasons; the 12 inner pillars represent 12 months of the year; the 12 outer pillars stand for 12 two-hour periods of the day – the two groups of 12 pillars, added up to 24, implicate the 24 solar terms, while the three groups of pillars (28 pillars altogether), represent the 28 Mansions of the Moon. Haven’t you fell in love with the hall already? 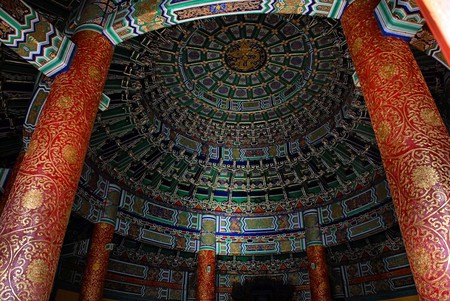 Inside the Hall of Prayer for Good Harvests | © Mal B / Flickr

No, you are not bleary-eyed or bad at maths, the Seven Star Stones really does have eight stones! The Seven Star Stones were laid according to the Big Dipper sky constellation, with the seven stones all of similar size to comply with the similar brightness of the stars observed by the naked eye on earth. The eighth stone, which is of a much smaller size, is said to be the Alcor, the companion star to Mizar from the Big Dipper.

How to walk on the Danbi Bridge

Many tourists in the Temple of Heaven itch to walk (or lie down) on the Danbi Bridge, the 360-meter long, 30-meter wide avenue that extends from the Circular Mound Altar all the way north to the Hall of Prayer for Good Harvests. You may have noticed that there are three marble walks on the avenue, and you probably want to follow the exact path of the ancient Chinese emperors – but guess which is the emperor’s walk? Definitely not the middle one! The emperors never tread on the middle walk because they did not want to outshine Heaven and, according to the rule that the right is superior to the left, the emperors would walk on the right lane while officials walked on the left. The middle walk, in the end, was left for the eunuchs. 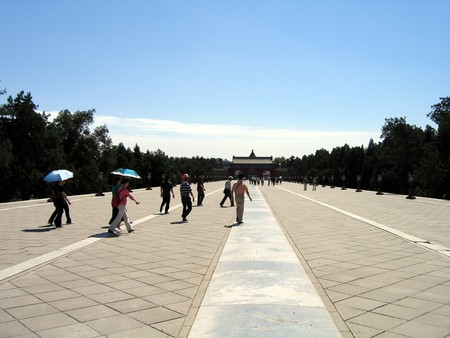 The Circular Mound Altar (Yuan Qiu) in the south part of the Temple of Heaven is a magnificently built altar lavishly decorated with carved dragons. The architect carved the number nine into all possible elements of the altar (from balusters to steps to the marble tiles on the three levels) to imply the supremacy (nine is considered to be the supreme number in Chinese culture). Can you count how many tiles there are on the Circular Mound Altar? 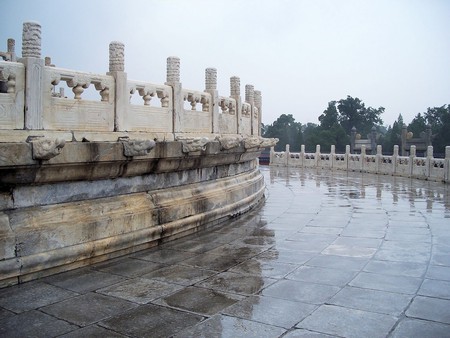 The magic of the Echo Wall

The Temple of Heaven is not only beautiful, but also fun. If you walk to the Imperial Vault of Heaven with a friend, ask them to stand on the opposite side of the Echo Wall, the smooth circular wall that surrounds the vault. As long as both of you are sticking to the wall facing north, one can hear the other’s voice even if it’s just a whisper (as long as the courtyard is not too crowded and noisy). That’s because the wall’s eaves and the hermetically laid bricks make the refraction of soundwaves possible.

The Echo Wall, Temple of Heaven, 1987 | © Steve Langguth / Flickr
Give us feedback