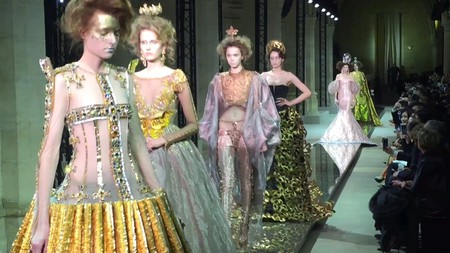 You may not be familiar with many Chinese fashion designers, but you’ve definitely seen their work. In fact, at the 2016 New York Fashion Week, a quarter of all designers came from China. From Kim Kardashian to Rihanna, Chinese designers are starting to dress the world’s biggest stars and fashion icons.

Remember the iconic yellow dress Rihanna wore to the 2015 Met Gala? That was Guo Pei. Born in and based in Beijing, Guo takes inspiration from the ancient Chinese imperial court when creating her fashion lines. As such, many of her pieces focus on intricate silk, fur, and embroidery work. While Guo has long been dressing the stars in her own country, the Met Gala catapulted her to well deserved, international fame. Guo and her team of 500 artisans spent over two years working on that gown alone. “I think there has been a lot of talk about haute couture dying out, but I believe in rebirth and the cycle of life,” Guo told CNN Style. Named one of Time Magazine’s World’s 100 Most Influential People in 2016, Guo Pei is just getting started.

Christopher Bu hasn’t always been a fashion designer. He studied hair, makeup, and styling for movie sets at the Beijing Film Academy but he found himself gravitating more to fashion once in the real world. Prior to launching his own label in 2011, he was the personal stylist to Chinese megastar Fan Bingbing. Now, he’s the designer responsible for some of Fan’s most attention-grabbing red carpet looks. His aesthetic is inspired by the movies and his personal travels, while his couture label is influenced by ancient Chinese culture. “I want to create clothes that embody our heritage and history, but are still relevant and chic today,” Bu told Jing Daily.

Having dressed all the major Chinese stars from Fan Bingbing to Angelababy, Lan Yu has already made it big in China, but she’s virtually unknown outside of the country. That’s all about to change. The first Chinese designer invited to Paris Haute Couture Fashion Week in 2014, she was more recently invited to New York Fashion Week to launch her first ready-to-wear collection. And she’s only 31. Born into a hundred-year-old Suzhou embroidery family, Lan seeks not only to remove the stigma of “Made in China,” but to make the words a badge of honor. She may not yet be a household name, but her work has been featured on the red carpets of the Cannes, Venice, Tokyo, and Berlin Film Festivals, and she has even dressed such big name style icons as Kim Kardashian and Lady Gaga.

Generation X-er, Zhang Na is unique in the fashion world. While she recognizes that she had help to get where she is today, she rejects major investments in favor of doing her own thing. After studying fashion design in college, Zhang moved to Shanghai and worked for a fashion company before gaining enough experience to start her own label. That label, Natoo (Na, for herself and, too for possibilities), struggled in its first few years. Her initial storefront on Changle Rd. was shut down in 2010 during the height of Shanghai’s urban renewal process, and her trademark application was rejected. So, she tacked the word Fake on to the beginning of the brand’s name and picked herself back up. Fake Natoo is meant to target other Generation X women through its highly wearable, experimental fabrics. More recently, Zhang has become known for her green label Re-Clothing Bank. Worried about the environmental impact of fast fashion, Zhang created new pieces from old clothes of family and friends, donating 10 percent of the proceeds to a charity that provides education for rural minority girls.

Born in Dalian, China, Haizhen Wang is more well known in his adopted home of London. With style icon Tilda Swinton in mind, Wang creates masculine-tinged women’s wear with no borders, combining eastern aesthetics with western styles. “I don’t think there is a clear divide [between the genders] and it’s something I’m interesting [sic] to explore further,” Wang told Vice Media. In 2012, he received the Fashion Fringe Award and has continued his rise since then. His angular designs are not likely to become mainstream anytime soon but certainly make him the indie darling of China’s fashion world.