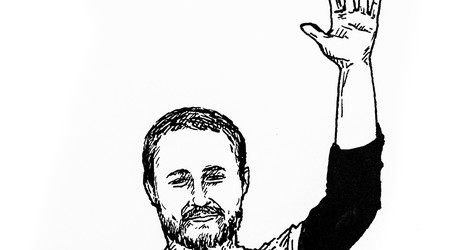 As part of our “20 Literary Translators Under 40” series, we interviewed Chinese language literary translator Canaan Morse.

Read: Chapter One of The Invisibility Cloak by Gei Fe

What are you currently translating?
At the moment, I’m translating poems by the Chinese poet Yang Xiaobin. Though little-known in the West, Yang Xiaobin’s work has had a signficant effect on the development of contemporary Chinese poetry, particularly at the intersection of creation and criticism. One of the few poets to grasp deconstructionism as a creative force, Yang Xiaobin introduced “play”—a satirizing, decentralizing force—into a Chinese tradition still deeply involved with Realism. I find his poems to be difficult, surprising, and endlessly flavorful.

What approach or procedures do you take when translating?
I do all important translations in longhand, drafting them at least once on paper before transcribing into MS Word. This gives me the chance to work slowly and contemplatively, as well as an opportunity to vet the pieces as I type them up. This is true for long-form prose translations (like novellas and novels) as well as for poetry.

What kinds of works or regions do you gravitate toward?
My latest fiction project, Ge Fei’s The Invisibility Cloak, was a multi-year effort that only just paid off in publication a few months ago. I like clear, well-carved prose and charged poetry—works I select for translation are often those in which I have “seen” the English translation appear through the original Chinese.

What are some of the more interesting literary developments happening in contemporary Chinese literature?
Chinese literature—which, if we go beyond mainland China, might be better understood as Sinophone literature—is changing as fast as its people are. The ranks of writers and poets continue to grow at a surprising pace, and the internet has provided a platform for the expression of many different creative voices, even as the PRC government attempts to maintain tight control.

Who or what are some untranslated writers or works that you would like to see in English? Why?
Younger writers who have decided to eschew the traditional career path of membership in China’s Writers’ Association excite me the most; the work of maverick writers and editors like Chen Wei promises to turn up newer and more exciting ideas than can be found in mainstream print magazines.