12 of the Oddest Theme Parks in China 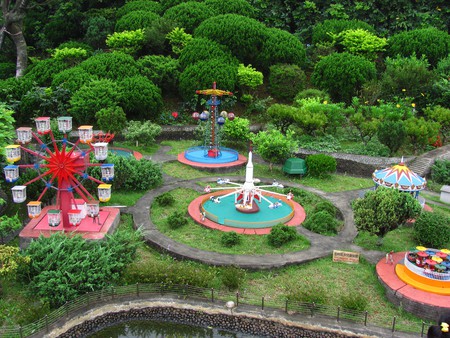 Amusement parks in China are often unconventional and over the top. From the strange to the extraordinary, appealing or unorthodox, these parks are independent of the usual corporate chains and well worth a visit. With numerous eccentric theme parks to choose from, we take a closer look at 12 of the strangest ever to exist in China.

Dubbed “Fake Disney” due to supposed imitations of Disney intellectual property, Shijinshan Amusement Park was one of the first amusement parks in China and the oldest theme park in Beijing. Built in 1986 and still in operation today, you can reach this old park at the western end of Line 1 subway.

After developers pulled out of construction in 1998, Wonderland Amusement Park sat in abandoned ruins for over 15 years before finally being torn down. The overambitious Disneyland copycat was supposed to be China’s premier theme park, but instead became a focal point for many dystopic documenters and foreign tourists. Wonderland was located on the outskirts of northwestern Beijing.

Window of the World

This park is filled with miniature global landmark replicas. You can travel the world through this gigantic theme park. See the Cologne Cathedral, Sydney Opera House, and dozens more immaculate recreations from around the globe. The first thing you will see is the Eiffel Tower, built 2/3 to the scale of the original. Window of the World is a great place for kids.

Located in Shenzhen, Minsk World was a military-inspired amusement park that included a former Soviet Russian aircraft carrier as one of the attractions. Minsk World closed in 2016 after 16 years of operation and the vessel has been transplanted to Jiang Su province, where the same type of theme park will open this year in 2017.

No known address, park in Shenzhen is permanently closed, new location not opened yet.

It’s fair to presume most people won’t appreciate or condone the usage of over 200 black bears, 80 tigers, and 30 lions and leopards that help make up this dilapidated animal village. The Xiongsen Bear and Tiger Mountain Village is right by the Guilin International Airport and features shows with performing bears and a range of other animals.
China, Guangxi, Guilin, Lingui, Ji Chang Lu +86 773 559 6299

Although Dameisha Seaside Park is large ( 1,800 meters long), you may still find it next to impossible to get away from the crowds on some sunny days . This sprawling outdoor park in Shenzhen features all kinds of beach activities, a walking park with thickets of tropical plantation and loads for kids to do.

Shenzhen’s fascination with miniature replicas continues with Splendid China Folk Village. Over 100 major Chinese tourist attractions are not only miniaturized but arranged according to the parks map of China. Each replica is said to be 1/15th of its original size and includes China’s most revered landmarks, including the Great Wall, Forbidden City, Terracotta Army, and more. On the weekends the park features shows that reenact history defining moments and cultural events unique to China.

Located in the majestic lands of Yunnan in southwestern China is an entire community of people with dwarfism. This park has sparked controversy between activists and park supporters. Supporters argue that the Empire of Dwarves helps those who have a difficult time finding jobs elsewhere find work while disabled-rights activists claim the park exploits dwarves as performers. Also known as The Kingdom of The Little People, live performances are held daily.

This sprawling film set park is located in Zhejiang and is one of the world’s largest film studio sets open to the public. Entire villages from the Ming and Qing dynasties are recreated and navigable. The park even features China’s largest indoor Buddha statue. Numerous Chinese TV shows and movies are filmed in Hengdian World Studios.

Supposedly the world’s largest indoor movie-theme park, (think Universal Studios but all indoors) this park can hold up to 8,000 patrons. Located in Wuhan, Wanda, who’s risen to prominence in the world film industry over recent years, built this attraction in the northeastern city of Dalian. Inside are 100,000 square meters of giant movie screens and rides based on movies.

Perhaps the most controversial park on this list. World Joyland is inspired by the universes of World of Warcraft and Starcraft (videogames) but is not officially endorsed by the games makers. Located in in southern Jiangsu province in Changzhou, World Joyland is adored by thousands of cosplayers in China.

Day 5: Joyland! 🌎🏰🎢 this place was insane. imagine a theme park that is a complete world of warcraft ripoff, that has just had money thrown at it. that's what this is. #joyland #worldjoyland #ccjoyland #joylandchina #worldofwarcraft #wow #starcraft #china #travelchina #chinese #themepark #chinesethemepark #elf #castle #crazy

A cross between a massive science museum, a theme park, and a shopping district, China Dinosaur Park is a must for kids and visitors of Changzhou alike. With amusement rides and dinosaur robots statues all around, this unique theme park is unlike any other of its kind in China.