12 of the Most Impressive Buildings in Tianijin 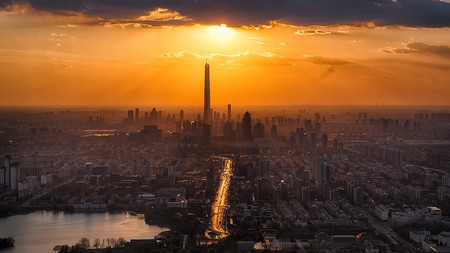 Tianjin, like many metropolises throughout China, is a wonderland of modern skyscrapers and has put many counterpart cities around the world to shame. Some of the most futuristic structures and novel towers in China are here in Tianjin, and these are in addition to the impressive historic buildings that are relics of Tianjin’s colonial past. Here are the most astonishing buildings and skyscrapers in Tianjin.

This quiet, airy campus is ideal for those wanting to explore an architectural wonder from the 1980s and then sit down and read in peace. It’s vastly open, spacious, and with no shortage of bookshelves to peruse. However, be advised that the selection of books published in foreign languages (not Chinese) is still rather limited.

The Ritz-Carlton of Tianjin is self-described as “opulent” hotel with an unmistakable retro vibe. Befitting for Tianjin, as a city with tremendous influence from the old world of Europe, Ritz-Carlton is about as luxurious as it gets, with a private park in its courtyard.

One of the most exquisite buildings in northern China, the St. Regis Hotel in Tianjin is a modern architectural marvel to behold. The hotel sits right along the shore of the Haihe River and is among Tianjin’s most beautifully luminous sites at night in the entire city.

The world’s six tallest skyscraper is right in the heart of Tianjin. Goldin Finance 117 is nearly 2,000 feet tall and has taken a decade to complete. You may recognize Goldin from viral media last year, when a daredevil couple climbed to the top without a safety harness.

After being closed down, renovated, and reopened to the public. Minyuan Stadium is a staple in the historic Five Great Avenues. This stadium first opened in 1926 and was used to host soccer games, but is now a cultural and leisure recreation “showroom” of Tianjin.

The Holiday Inn franchise reinvented itself in China as a premier brand in accommodations. With three different Holiday Inns to choose from in Tianjin, the Binhai location is by far the most intricate designed, sporting a contemporary triangular facade.

Another luxury hotel that is situated along the Haihe River is the Shangri-La. Though the exterior of the building itself may bot be as dazzling in comparison to some of its contemporaries, the Shangri-La of Tianjin has an interior that will make you wonder in awe.

The lights from these mesmerizing buildings glimmer off the Haihe River at night. Haihe Cultural Square is an iconic historical section of vintage buildings that is in the heart of Tianjin. Alongside the “mother river,” it is inspired by European and early American architecture.

Buddhist Temple, Building
Facebook
Email
Twitter
Pinterest
Copy link
Share
An original Tianjin high-rise at 75 feet tall, Dule Temple was constructed over one thousand years ago and is known as the oldest wooden building of two stories that still stands in China. This UNESCO-recognized ancient Buddhist site can be found on the outskirts of Tianjin in Ji County.

Also known as Ji Tower and Tianjin Tower, a megacity in China would not be complete without a signifying skyscraper of finance. Tianjin’s World Financial Center has 75 floors and is right on the edge of Haihe River. Dine in the tower’s Sky Restaurant up on the 72nd floor.

At 1,362 feet tall and built in 1991, the Tianjin Tower is still among the world’s tallest structures. Today it serves as an observatory with a rotational restaurant. Interestingly enough, this gargantuan tower is the 8th tallest tower in the world and is centered in the middle of a lake.