The Top Chinese Street Foods You Should Try At Least Once 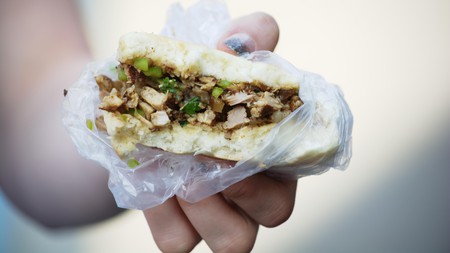 Eating your way around China’s bustling street food is the perfect way to explore its culinary scene. There’s an endless selection of options, which include crepes, dumplings, rice balls and even a burger. Here Culture Trip lists some of the best street food you’ll find in China.

Known as the Chinese crepes, jianbing is one of the most common street foods eaten for breakfast in China. It is easily accessible around street corners, outside of subway stations and tourist attractions. Though the types of jianbing vary by city, the main ingredients are generally the same. The dough is made of wheat and grain flour and fried on a griddle with egg as the base. Meanwhile, the centre is filled with scallions, lettuce, cilantro and rich chilli sauce. 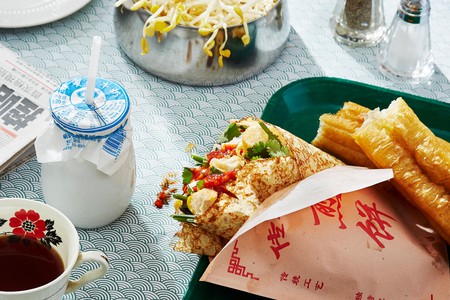 Filled with vegetables and/or meat, jiaozi – or Chinese dumplings – are common street foods. They are shaped like ancient gold ingots, which were believed to bring you good luck. They are often shallow fried or deep fried and eaten with a dip of soy vinegar sauce for flavour. One bite releases a mouthful of hot, juicy broth that reaches every sense on the tongue, creating an explosive mixture of flavours. Jiaozis are eaten all throughout the year, but more so on Chinese New Year. 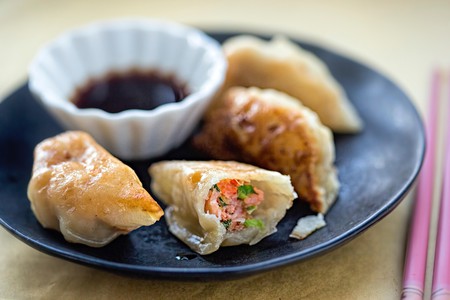 Pai gu nian gao is essentially a Chinese dish with pork chops and fried rice cakes. The pork chop is marinated and boiled with oil, sugar, sauce and ginger, while glutinous rice flour is ground into a paste, sliced into thin, small segments, wrapped around the pork chop and then fried. The cooking process results in a hot, slightly sticky, compact meal that conceals the juicy flavours of the pork chops as well as the sauce. 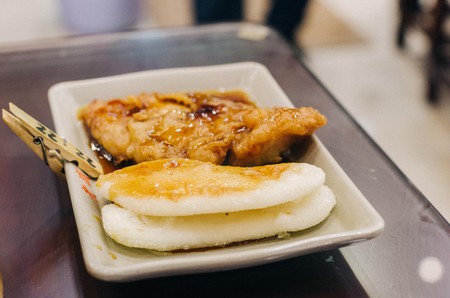 Cifantuan or ci faan are rice balls filled with various flavourful local ingredients. The most common types are the savoury kinds. These include aha cai (pickled vegetables), rousing (pork floss) and youtiao (long golden-brown strips of deep-fried dough). There are also the sweet variations, which consist of the same ingredients as the savoury ones, but with added sugar as well as sesame. Cifantuan are one of the most popular breakfast dishes along the streets of Nanyang Lu and Xikang Lu in Shanghai. 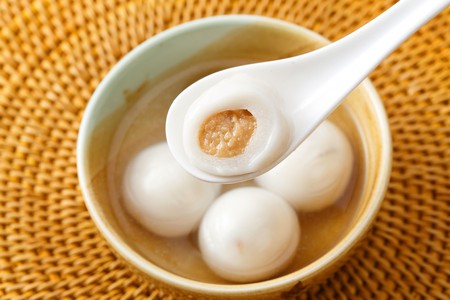 Baozi are dough buns often filled with juicy meat such as barbecued pork and/or vegetables, and steamed in steaming trays made of bamboo. They are prepared similarly to the way jiaozi dumplings are prepared – the only difference is that baozi consist of thicker dough, as well as a larger amount of filling. They often appear in two sizes: Dabao (“big buns”), which are the most common forms of baozi sold by street vendors, and Xiaobao (“small buns”). 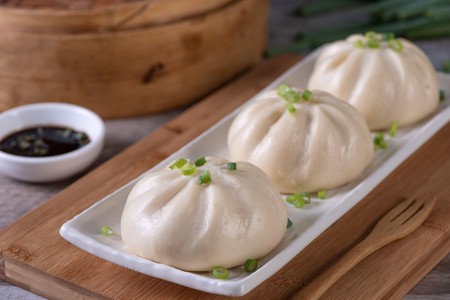 Huo guo, more commonly known as hotpot, is a Sichuan specialty that has spread its influence throughout the country. Over time, many variations have developed in each region of China, using different meat as well as soup bases, sauces and condiments. The most famous of all huo guo is the Chongqing ma la hotpot, which adds Sichuan pepper to the boiling meat broth. It is known to leave a burning and spicy sensation on the tongue. 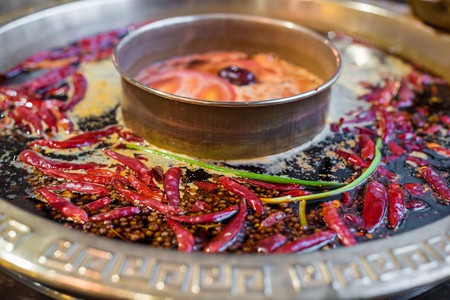 Rou jia mo is a Chinese version of the American hamburger, except the buns are thinner and flavoured with meat gravy and chilli paste – rather than ketchup and mustard. The meat is shredded rather than forming a large, circular patty. Each vendor sells rou jia mo with his or her own special filling of spiced mix. The two most common types are Shaanxi Province’s lazhirous jiamo, which is made with pork in gravy, and Ningxia Hui Autonomous Region’s yangrou roujiamo, which is made with lamb. 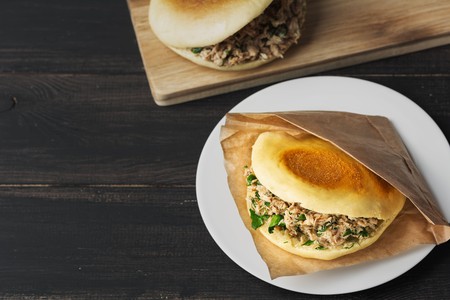 According to historical records, donkey meat has been a Chinese delicacy since the Ming Dynasty. Back then, it was eaten for military men’s survival. Today it is an easily accessible, popular, common street food that is simple to carry on the go, particularly in Baoding. The donkey meat is first shredded and then stewed with a mix of various spices and sauces. This results in a juicy, savoury batch of meat that is placed inbetween two sandwich buns. 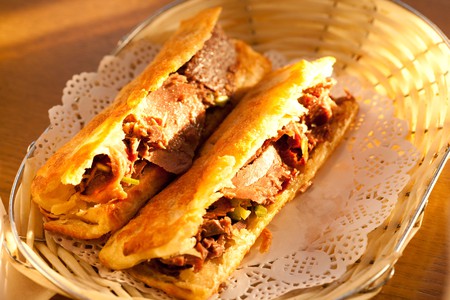 Chuan’r, also known as kebabs, are pieces of meat skewered onto thinly cut bamboo sticks. Any kinds of meat or even vegetables are used. Street vendors prepare them by coating the meat with salt, dried chilli flakes and ground cumin spice, and then mixing all three ingredients together before barbecuing the marinated meat over charcoal fires until they are well cooked. Chuan’r are common throughout China, but they are mostly eaten at outdoor night stalls called dapaidang during the summer. 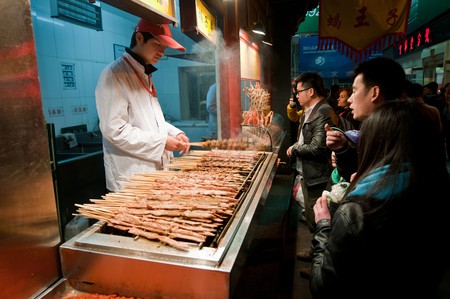 Chuan’r on a food stall in the Dongcheng District, Beijing | © Konrad Zelazowski / Alamy

Bing tanghulu are Chinese hawthorns covered with a hardened coat of sugar syrup and skewered onto long thin sticks. They taste both sour and sweet – similar to mini candy apples, but more sour, astringent and granular. Though tanghulu come with other fruits such as strawberries or apples, the most common and popular version, which is found in central Beijing, is stuffed with haws. The exterior is crunchy and sweet, while the interior is soft, sweet and sour due to the fruit. 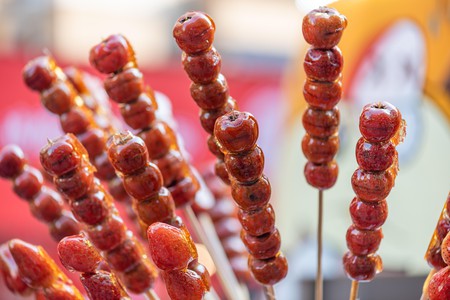 Banmian is a popular Chinese noodle dish that commonly uses fish stock, particularly anchovy stock, as the base for the soup. In most cases, the ingredients include egg noodles that are made of eggs, flour, mushrooms and anchovies. However, variations of noodle soups can use substitutes or additional ingredients such as sausages, chicken drumsticks, chilli or Sichuan peppers. Depending on the vendor, banmian, especially the soup, leaves a flavourful aftertaste that lingers on the tongue for hours. 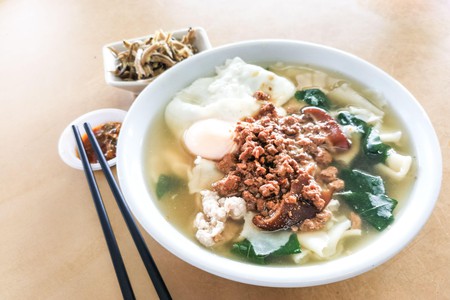 Cong you bing, more well known as scallion pancakes, are thin flatbreads layered with spiced scallion and deep-fried with oil. They are essentially the Chinese version of Western pancakes, but made with dough rather than batter. Just as pancakes are an essential part of breakfast in America or European countries, cong you bing is a regular breakfast item found as a common meal along China’s streets. Though greasy, they are known for their flavourful and juicy initial taste and aftertaste. 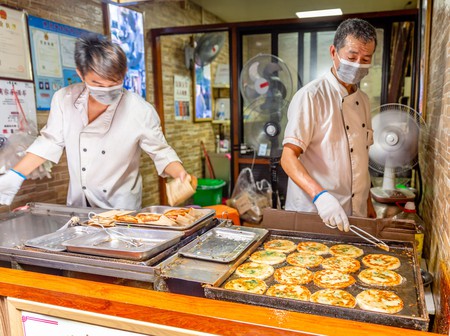