11 Non-Alcoholic Drinks You Have to Try in China 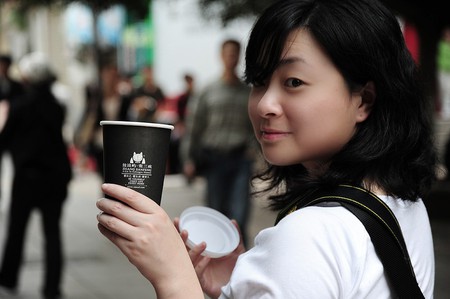 Though China has a reputation for being all about tea and hot water, it actually has a wide variety of non-alcoholic drinks that have fans across the country. But how do you know what’s good and what isn’t? Start with these eleven and you can’t go wrong.

Sweet tea isn’t just a southern American thing anymore – Wang Lao Ji may very well be China’s favorite canned soft drink. Go into any convenience store or restaurant and look for the iconic red cans: they’ll be there. Despite its high sugar content, Wang Lao Ji is refreshing and flavorful and allows the complex notes of the tea base to shine through.

Milk tea is such a popular drink that it has followed the Chinese diaspora across the world. Often paired with tapioca bubbles and called ‘Boba’ abroad, there’s nothing quite like drinking milk tea in its country of origin. The varieties are endless as well, with Hong Kong milk tea being distinctly different from the mainland’s style.

Jelly tea can be found nearly anywhere milk tea is found, in places such as chain favorites like Yi Dian Dian and Coco. Similar to bubble tea, jelly tea enhances the excitement of a drink by adding a layer of texture. The jelly is typically chewy, but not too chewy, allowing the drinker to savor the tea just a little longer.

If you haven't gotten your hands on a pineapple/mango bubble tea with mango jellies, it might be time to treat yourself to a trip to The Spice Hut. #bubbletea #jellytea #mango #pineapple #treatyourself #bellingham #thespicehut

Yes, you read that right. Cheese tea, though hard to imagine, is growing in popularity across China and elsewhere. It is made with a cheese powder that froths up to the top of the drink and acts as a sort of salty whipped cream. The cheese tea concept was born at milk tea chain Happy Lemon but has been adopted by increasingly more chains and stand alone drink shops.

When it comes to soft drink choices, China has more than just tea. Another favorite beverage is sweetened soy milk, a drink that can be appreciated either hot or cold. The hot version is perfect for a classic Shanghainese breakfast of youtiao, or dough sticks, which were made perfectly to be dipped into the milk upon each bite. The chilled version can be found in most convenience stores across the country, but tastes best in the elusive glass bottles found in selected hole-in-the-wall restaurants.

Far more delicious than it sounds, Suan Mei Zhi is a popular summertime drink served in restaurants across the country, oftentimes for free. The taste is reminiscent of sweet tea but carries a deepness to it thanks to the plums.

Though technically a Japanese product, Pocari Sweat can be found in convenience stores across China. Designed as a sports drink with a taste similar to Gatorade, Pocari Sweat has been adopted as a cure-all to nasty hangovers.

There are few drinks more refreshing than pure water, but China’s salted soda water gives it a run for its money. Found primarily in Shanghai, salted soda water has been around since before Coca-Cola products entered China, and still finds fans in many old-school locals.

On a hot summer’s day in China, you’ll be lucky to be greeted with coconut sellers on the street, touting ice-chilled whole coconuts with fresh juice inside. But for all the days that the coconut sellers aren’t in action, opt for the canned version instead, which can absolutely compete with the real thing in terms of refreshment.

The longer you’re in China, the more types of tea you have to try. But when you’re just getting started, chrysanthemum tea is all you need. This photogenic drink is made with whole chrysanthemum flowers, rock sugar, goji berries, and any other number of beautiful ingredients. And luckily, the drink is just as delicious as it looks.

Did you know that China grows and processes coffee beans? That’s right, the country that’s famous for its tea also has a sweet spot for coffee, with 98% of all Chinese coffee grown in the southern province of Yunnan. The beans there are light and aromatic with notes of cinnamon – Starbucks stores across the mainland have been carrying a Yunnan roast since 2017.