10 Things You Didn't Know About the Terracotta Warriors 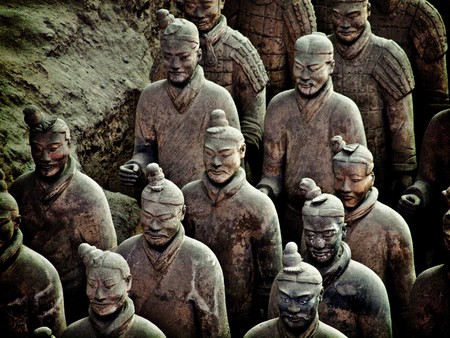 Discovered by farmers while digging for a well, the Terracotta Warriors lay dormant for more than 2,000 years before excavations began over thirty years ago. The sheer scale of the army is a marvel: it consists of more than 8,000 figures simply buried in the ground and abandoned. Why were they made in the first place? Forming just one piece of an enormous puzzle, their discovery is helping unravel the mysteries of the ancient world and the ambitions of a man – Emperor Qin – who united China.

They’re not even the best part

The Terracotta Warriors are one of the most impressive archaeological finds from the ancient world, but they are – in fact – a condiment to the main dish. Made of terracotta clay, they are burial goods that makes up one part of a complex that is the tomb of China’s first emperor – Qin Shi Huang. In its entirety the mausoleum stretches 91km² (57 mi²) and replicates – underground – Qin’s imperial city, (modern day Xi’an, in Shaanxi province), complete with a palace and city walls.

They are life-sized sculptures of an ancient army that Emperor Qin hoped would defend his empire in the afterlife. 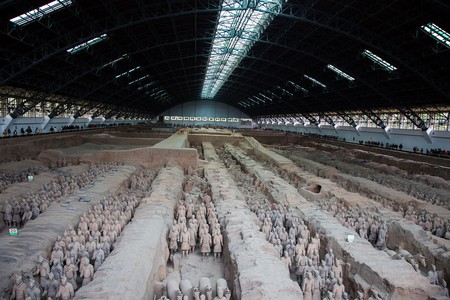 The pits containing the terracotta army lie pretty far from the burial site, which is denoted by a visible tomb mound 1.5km (0.93 mi.) away. Archaeologists think that it’s directly under this mound that the emperor’s burial chamber, and the emperor himself, lies – more than 30m (98 ft.) below ground. 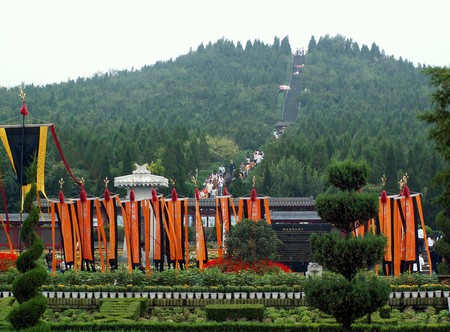 There were meant to be more

Four main burial pits filled with terracotta soldiers have been found, one of which is empty, making it likely that the tomb complex was incomplete when it had to be put to use. The emperor, obsessed with finding the elixir of life, likely died from mercury poisoning due to consuming the deadly metal which he thought could confer immortality.

They have terracotta friends

Aside from soldiers, there are plenty of other types of ‘terracotta personnel’ in the emperor’s mausoleum. Terracotta musicians, acrobats and topless, potbellied musclemen are just some of the other figures excavated from pits surrounding the central tomb.

There is only one historical reference to them

The only ancient mention to Qin’s army is found in imperial historian Sima Qian’s famous historical records Shiji (史记), known as the Records of the Grand Historian. It was written between 109 and 91 BC, 100 years after the death of Qin in the Han dynasty.

Many who tried to find them were killed

Despite a notable tomb mound, the mausoleum – and the army – lay (mostly) undisturbed for over 2,000 years. No doubt many knew of the treasures that lay inside, but none succeeded in plundering it; this was because a sophisticated system of booby-traps were thought to be in operation – which people still believe is true today.

They were worshipped as gods

Given the large area covered by the burial complex, it’s not surprising that locals had been serendipitously unearthing bits and pieces from the mausoleum for generations. Locals speak of terracotta pieces which resemble body parts being dug up and worshipped, or even used as fragments in local buildings.

They’re not individual pieces of artwork

Contrary to popular belief that the terracotta soldiers were handcrafted by artisans due to their individualised facial features, the soldiers were in fact cast out of moulds. The faces were, however, hand-carved, but features were probably not based on real faces; rather, the variation was due to drawing each face slightly differently.

The sculptures show more variation than just being upright fighters – life-sized bronze chariots complete with coachmen, kneeling soldiers holding bows and arrows, and a whole host of alternatives have also been unearthed and are spectacularly displayed in on-site cabinets. 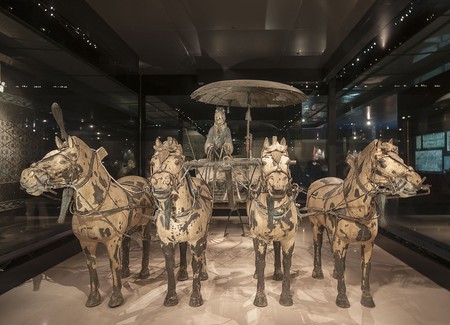 The pits housing the soldiers originally had wooden roofs and beams, and were covered with waterproof material. Long gone, these structures were built to resemble the hallways and corridors of an imperial palace.

They use to look less solemn

They might not exist if it wasn’t for the Greeks

Archaeologists now think that ancient Greek sculptors were major influencers for the Terracotta Army. It is thought that Greek craftsmen who arrived in Xi’an, the starting point of the Silk Road, may have been on hand to teach clay-casting techniques. DNA found along the famous trade route, thought to stretch as far as the Middle East, suggests that exchange was much more substantial than just being related to cultural influences. 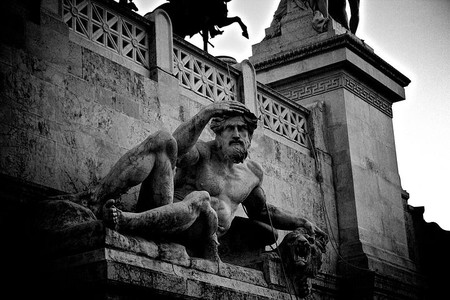 Greek Sculpture | © Pixabay
Give us feedback